Enjoying the light on the Costa De La Luz

There wasn’t much to write about yesterday as it rained mostly, so it was mainly an ‘in van’ day, spent tidying up.  We did manage a walk into town later, ducking under cover to avoid the heavy showers and buying some bread and another couple of delicious cakes!  The wind was up again in the night, the gusts shaking the van and this kept us awake into the early hours, when it suddenly dropped and allowed me to get some sleep (but not Cathy unfortunately).

The day dawned still and sunny and we left Tarifa, heading west.  On the Campercontact app on my phone, I noticed a garage in town that had a motorhome service point, plus it appeared on the MyLPG app.  I filled up with LPG - 10 litres used in 12 days. The nozzle clearly didn’t connect well to the Spanish adaptor as when I when to unhook it after filling, there was a long streak of frozen gas down the side of the van.  With the loo emptied and tank brimming with fresh water, I thought I’d give the van a wash, as he’s looking decidedly grubby after almost a month on the road.  However, the hot soapy wash and cold rinse via the pressure hose (used at distance as they’re not good for campervan windows and fridge grilles) did little to remove the grime, so that was a couple of Euros wasted - lesson learned.

I’d dialled in the coordinates for an aire at Barbate up the coast, but on the way we noticed some lovely looking resorts along the way, so turned off to explore one of them - Zahara de los Atunes on the Costa de la Luz - which is were Nido’s parked up now, wild camping on the car park behind the dunes and beach.  Plonked in the middle of nothing except a broad 12km white sandy beach, this village is low-key and quiet at the moment, although it’s a fashionable resort with some great looking restaurants and beach bars that spring up in the summer, when the mainly Spanish holidaymakers arrive.  We had a good long walk on the beach, enjoying watching the wild Atlantic waves, great for the surfers out there but a bit too wild for swimming, although the water didn’t feel too cold.  After a lazy lunch we took our chairs and kindles back to the beach and spent the afternoon reading, walking and just chilling out.  This village reminds me a lot of some of the quieter, chic resorts in France, particularly along the Cotentin Peninsular in Normandy or the hamlets of Isle de Re.  Cathy cooked a delicious risotto, using some of the wild herbs we picked and the last of the scrumped lemons, the peel of which also made its way into her G&T - she’s enjoying the duty free litre of Tanqueray we bought in Gib!  It’s now 2030 and the sun is still shining over the dunes; I can see the outline of the wooden lifeguard tower silhouetted against the deepening sky.  This part of Spain certainly lives up to it name as the Coast of Light. It feels warm through the van windows, but the breeze is cool as I sit on the van step and brush the sand and shell fragments from my feet.  Between us and the dunes is a band of greenery, left alone due to the wooden boardwalks that take us to the beach. The skylarks must nest there as I can still hear them in the sky and it’s also full of insects, which the low-swooping swallows are enjoying.  It should be quiet tonight and, with just a gentle breeze now, I hope we’ll catch up on some sleep. 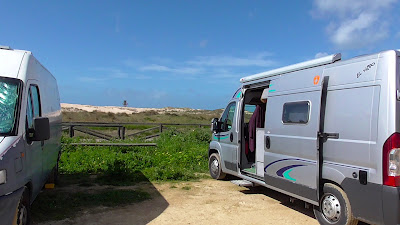 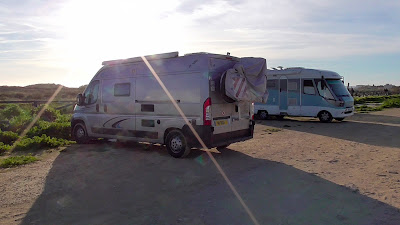 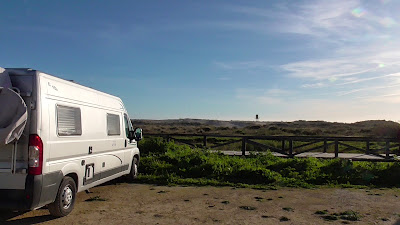 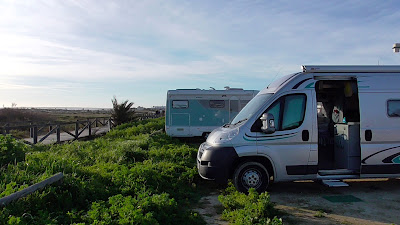