Reflections on our 2013 Motorhome Tour 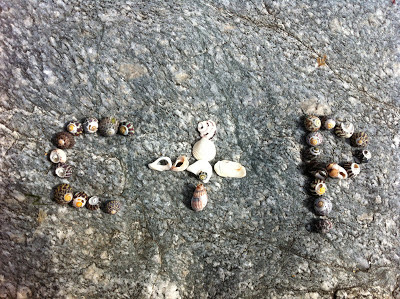 We continue to research which van will be best for us when we eventually have the funds to buy our own. In the meantime we use our main holiday each year to combine our love of travel with trying out different van layouts.  Last year we travelled to Northumberland in a Chausson Welcome 85.  We liked the fixed French bed, plus the quality of the Chausson fittings.  This year we chose to spend two weeks touring France in a CI Mizar, a larger van than the Chausson, but this time with a fixed island bed.  On both occasions, we hired our van from Live The Dream Motorhome Hire, based in our next door village in Anderton, Cheshire.  The owners, husband and wife team - Ian & Steph - provide an excellent service and, as motorhomers themselves for many years, know more about the subject than anyone else we know. We cannot recommend them highly enough.

The Tour
We spent two weeks touring France from 1 - 15 June 2013. We didn't plan a full day-by-day itinerary but we had a couple of places we wanted to visit.  Cathy had an urge to wild swim in the Ardeche so that was definitely on the list.  Also, on the way down I wanted to visit an old friend from my Navy days, who lives with his family a few miles from Dijon.  Apart from that we were free to go where we liked, so long as we made it back to Calais to catch the tunnel on the 15th.

We had a plan to travel down the Eastern side of France, spend a few days in the Ardeche, then travel up through Dordogne, Lot, Limousin and back north.  But, to be honest, we vastly under-estimated both the size of France and the mileage we needed to cover to get around.  We drove over 3,500 miles during our two weeks. In general terms this equated to about 5-6 hours on the road each day. We saw a lot of France, which meant we have a good idea of which areas we want to visit again.  However, it meant an early start each day and, by the time we reached our destination, it was late afternoon and we were too tired to explore or enjoy the spot.  So next time we plan to move less than 2 hours between overnight stops.  I suspect we'll hug the coastline, dropping inland for a change every couple of days.  The thing is, whilst we enjoyed seeing the heart of France, our first love is the sea. It's where we're at our happiest and most relaxed, so I think we'll be spending more time beach-bumming next time.

The Crossing
We travelled via the Channel Tunnel.  In the past, when we lived in Gosport and travelled to France in our car, a 20 minute drive to the Portsmouth ferry port was easy.  Although it entailed a 6-7 hour crossing, this was tolerable, especially if we booked a cabin.  However, a long ferry crossing in a motorhome is expensive - in fact it's very expensive.  As the transit time from home to Folkestone is about the same as to Portsmouth, the tunnel was a viable alternative.  We booked our tunnel crossing using the Tesco Clubcard Voucher scheme - effectively this meant our return crossing was 'free'. The booking process was easy and the check-in and crossing was stress-free.  If you're in a motorhome and are happy to start your journey in Calais, this is well worth the saving in time and money.  As we had arrived quite late in France we decided to park overnight in the motorhome parking in Cite De Europe, which is across the road from the Carrefour hypermarket.  We were able to buy some goodies for the first few days and marvel at the seafood, goodies and patisserie on sale! 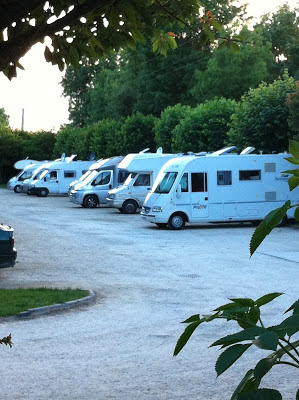 Part of our holiday was to try out the Aires which are readily available in France.  Several months before we travelled we bought the 'All the Aires' book from Vicarious Books.    We also bought the ACSI campsites guide and discount card as we believed we'd need electric hook up regularly, wifi plus access to long, hot showers.  During our 14 nights away we wild camped twice, stayed on two campsites and the  rest of the time stayed on Aires.

We really liked the Aires. We felt much more relaxed when staying on them and, in general, they were all close to the centres of the towns.  Although there were a couple of Aires that either we thought unsuitable (sloping pitches) or couldn't get in (wouldn't accept our credit card) we managed to stay on all those we chose.  Also there were only motorhomes, so it felt much more of a community, whilst respecting each other's privacy.  I'd read in the guide that you couldn't put out tables, chairs or awnings on Aires, nor use BBQs.  On the smaller Aires this was for practical reasons, but on the larger ones there was plenty of room to use the outside space. Even on the smaller Aires there was normally some space behind the van to put out a chair.  There were various ways to drop waste and take on water.  Some were credit card payment, some needed some form of token and a couple were free, at least to empty the toilet.  Where tokens were needed, they were normally bought at the local mini-market, tabac or tourist information office.  On a couple of aires the price included electricity but, other than that, we didn't bother with hook up. The only downside with the Aires book was the co-ordinates aren't in a format that could be used on Google Maps, although they were fine for the satnav.

We stayed on two 'ACSI' campsites. The card was readily accepted and the staff were friendly and welcoming.  In general the pitches were fine, although it was a bit of a pain walking or driving around to find one suitable for the motorhome, particularly under the stare and glare of other campers, especially the caravanners! We didn't really feel comfortable on these.  The toilet & shower blocks were adequate, although the water was normally only lukewarm and were mostly mixed. Cathy wanted the showers to have a good, long hair wash. Perhaps we were just unlucky.  However, the washing up facilities were useful as was the electric hook up.  We also made full use of the wifi - on one site it was free but on the other it cost €10 for 5 hours, which almost doubled the cost of our stay. It was just as easy to stop at a McDonalds to use their free wifi with a cup of coffee. We'd probably still use a campsite about once a week for the laundry facilities, longer showers and electric hook up.  But I don't think we'd bother with the ACSI scheme again as there were loads of campsites, many of which offered the same rates as the ACSI ones.  We didn't need the pools, entertainment and restaurants that many of them had; we much preferred the smaller, quieter campsites.

Our two nights wild camping were the first night in the Cite de Europe motorhome parking in Calais, and in the 'port' car park by the Burgundy Canal.  Wild camping is easy enough - I think the only criteria is if we feel safe to park and stay there overnight.  In a small van wild camping will be easier. 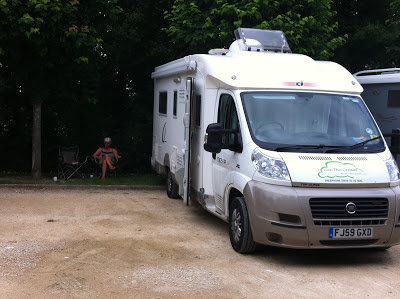 We hired a CI Mizar.  It had a rear island bed, which was a layout we wanted to try.  It was a longer van than we'd hired before - 7.30m plus bike rack, 2.31m wide plus wing mirrors and 3.10m high with the satellite dome.  It was a 3L automatic, which made it easier to drive and I used the cruise control more than I expected.  The cab seats swivelled around and there was an L-shaped seat on one side and a side seat on the other.  The table could be swivelled around and moved side to side (or back and forth), but we found the table a bit too big - it always seemed to be in the way.  The cooker was very good - 4 gas rings, a decent grill and a very good full sized oven.  The downside was that it took up a lot of room that we'd preferred as storage.  Also, the sink had no cover so prep space was minimal.  There was a large fridge with a big freezer compartment.  But we think we could have lived with a smaller one to create more storage.  Access to the cutlery drawer was a real pain as it was above the fridge freezer and so above eye height for us.  We had to open a cupboard to access this drawer and above this was the main kitchen equipment cupboard - we had to more or less empty it each time we wanted to get to anything. The higher cupboards were good, although adding a shelf in a couple of them would have increased storage options. The separate shower cubicle at the foot of the bed was large and light and the shower powerful. Equally, the separate toilet and wash basin on the opposite side were good.  We also liked the door that separated the bedroom from the rest of the van.  Either side of the bed we each had a half wardrobe but we found clothes fell off the rail during transit. The double bed was very comfy and spacious although we didn't like the space either side of the bed as much as we expected - it was a bit cramped and hard to access the floor to clean.  The bed lifted up to access plenty of storage underneath.  The garage area was fine but we found we had to remove a lot of things to get to some items stored in the middle. It had a large awning but we didn't use this.

Although a nice van, we realised the island bed isn't for us - we actually preferred the fixed French bed, which surprised us.  Given its length and width it was quite stressful driving it on smaller roads and there were a number of places, mainly wild swimming spots, that we just couldn't get to.  It would also have been a bit tight on some of the smaller Aires.  It's made us realise that we think we'd prefer a high top van conversion, such as an Adria Twin.  Although more compact inside with limited cooking facilities and a wet room, it still has a fixed double bed, heating, seating and adequate storage.  But, more importantly for us, it's size means we can get to many more places, especially in this country, such as Cornwall and some of the wilder areas of the Lakes.  So we continue to learn about what type of van will suit us and are refining our ideas accordingly.

Summary
This was a great trip.  We saw loads of France and have a few areas we'd like to spend more time in. We also learnt about slowing down our journey.  We have a better idea of the type of van we'd like to buy.  Most importantly, we remain excited and committed to buying our own van and escaping to the sun! 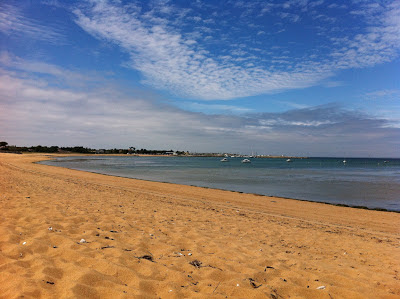