That's what we were yesterday - two old gits walking.  For the first time in ages we went out for walk in the countryside - Anglesey to be exact.  For days the weather's been rubbish - heavy, constant rain and cloud, so we decided come what may we're going out for some fresh air.
It turned into a lovely coastal walk, which stayed dry and the sun actually shone for a while.  I picked the walk from the Anglesey Tourist website, which has some interesting walks and maps.  We chose a walk starting from a car park by the beach at Cemaes Bay, a circular walk taking in both inland countryside and the rugged coastal path with several ascents and descents with a view of the waves crashing against the rocks.  We also passed Cae Owen, which produces local wine from vines planted on the south facing slopes (sadly we did not stop and sample them!). 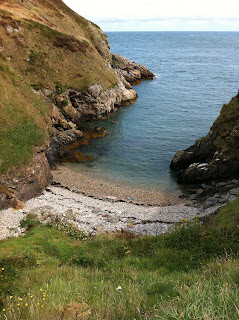 On the way we passed Hell's Mouth (or Porth Cynfor) which looked a great place to swim but unfortunately was at the bottom of a steep cliff path which had been fenced off.  We carried on and stopped for lunch (our usual walking food of tuna, onion & mayo butties) on the pebbly beach at Porth Llanllenia).  This included a snooze, listening to the waves crashing on the rocks and pebbles as the sun eventually broke free; we both woke ourselves up snoring!

Further along the route we came across the tiny Eglwys Llanbadrig Church, perched on the top of the cliffs with a large number of very old (and very new) gravestones - some sad history of the families of Cemaes, with large groups of children dying young.  But surprisingly, many gravestones showed those of advanced years; perhaps the sea air, fresh fish and hilly walks kept them fit and healthy? 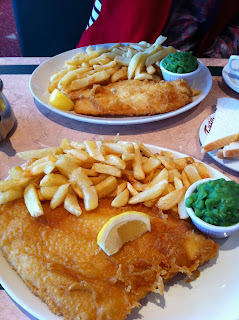 We returned to the car park and wandered along the prom for a brew, planning to have a quick paddle before heading home, but by the time we'd finished our drink the sun was gone and we'd cooled down in the brisk sea breeze.  So we returned to the car and headed home via a quick tour of Anglesey and fish and chips in Llandudno.

As we walked the coast we talked about our plans for the future, mainly buying a campervan and travelling in both this country and abroad.  This gave us the idea of starting this blog to capture our travels and thoughts, if only to act as an online diary for our own use, to remind us of where we've been and what we plan to do in the future.  But if you come across this we hope you enjoy it.
No comments:
Email ThisBlogThis!Share to TwitterShare to FacebookShare to Pinterest
Labels: anglesey, walking
Newer Posts Home
Subscribe to: Posts (Atom)