We’re parked up in a large aire in the village of Ricote, up in the hills in the Province of Murcia.  Actually, it’s a large area of packed earth with service facilities.  We’re surrounded by lemon groves and jagged mountains on three sides, with the village filling the fourth.  There’s plenty of room for more vans if they turn up.

We didn’t sleep well last night.  The fiesta drums banged all night, along with the very loud explosions of what sounded like IEDs and gunfire.  They were still going full pelt and no-stop when I finally got up at 0730 this morning; only later did I find out it was both Father’s Day and St Joseph’s Day in Spain, hence all the shops and supermarkets being shut today.  I wandered off to the showers and endured a very cold dunking; the water is heated by a solar panel and at that time of the morning, there wasn’t much solar!

We made a decision today.  The Costa Blanca doesn’t do it for us.  Its over-developed, high-rise hotels and apartments, scruffiness, noise and graffiti are not what we want out of this trip.  Plus the aires seem to be stuck out on the periphery on the edge of industrial estates and half-built urbanisations. So we decided to give it a miss and head for the quieter and wilder province of Murcia.  I filled up with LPG on the way out. This was the first time I’d filled outside the UK, using the adaptor for Spanish pumps.  It took me a couple of attempts to get it hooked up but eventually I successfully filled our tanks. I was pleased to see that, over 2 weeks, we’d only used just of £5 worth of LPG, despite only being on electric for 2 nights.  So, when it comes to a cost/benefit analysis, not paying for electric hook up (which can be up to €4 per night) is a wise choice.

The sun shone as we drove along the coast, past the ugly skyline of Benidorm (*shudder*) and Alicante, before turning off towards Murcia.  The landscape was dry and barren. We’d noticed the river beds were still dry, even at the end of winter and a bit of online research showed Spain was suffering its worst drought since records began over 150 years ago - it’s going to be a tough year (and many more to come if things don’t change).  Having said that, as I type, the rain is torrential and I’m thinking outside will be a muddy quagmire by the morning if this keeps up!

We’d planned a stop in the town of Archena, to stretch our legs and take a look around; it was supposed to have some interesting Roman architecture. The aire was quite full but, after a short walk, we turned back; the broken glass on the pavements and graffiti everywhere put us off.  As the UK has a litter epidemic, so Spain is suffering similar with graffiti, even all over some of their ancient monuments.

We drove up the hairpins bends, past some lovely green, oasis-like areas of fruit and palm trees, before arriving in Ricote.  After a cuppa we had a walk around the village; plenty of our favourite narrow streets, plant-strewn balconies and courtyard gardens to nosy at.  Families were in the restaurants and sat outside the bars (in thick coats and scarves of course, as we wandered past in shorts and t-shirts!), making the most of the public holiday.  After a few days of one night stops and a long drive today to leave behind the (in our view) over-rated Costa Blanca, we hope to spend a couple of nights here.  If it’s dry enough I may get out for a bike ride, plus we want to walk around the lemon groves that surround us.

In the meantime, the rain is mainly where we are in Spain…..but at least there’s no snow and ice like at home. 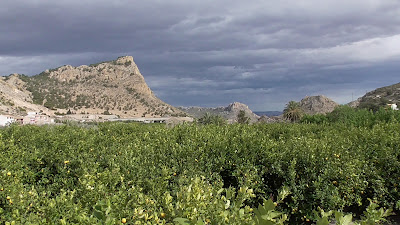 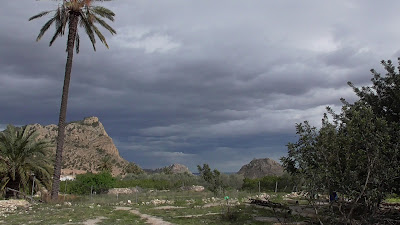 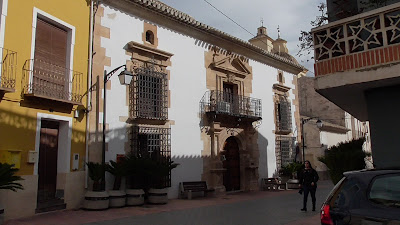 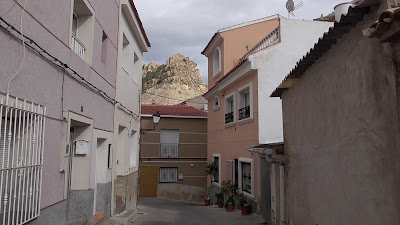 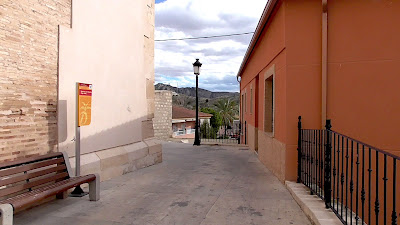 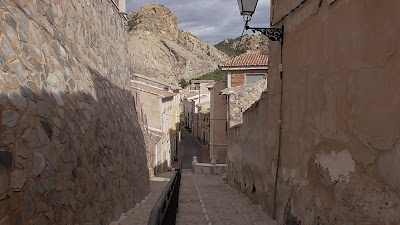 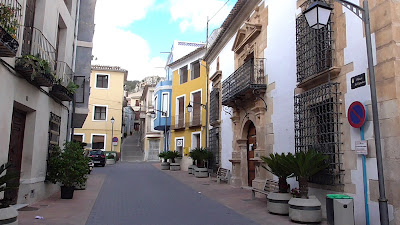 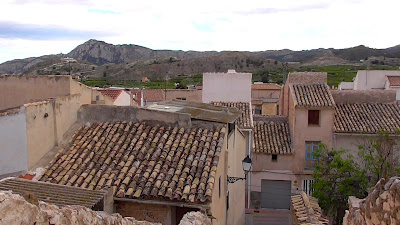