Foothills of the Pyrenees in Basque Country

After climbing Dune du Pilat yesterday, when we woke up this morning we still had sand where sand ought not to be!  A good shower and change of clothes sorted that out.

Nido is parked up on his own in an aire in the village of Sare (or ‘Sara’ in the local Basque language) in the foothills of the French Pyrenees.  Although it’s by a road, the passing traffic is minimal and we have great views over the hills.  It’s still blowing a hooley, as it was this morning when we battled outside the van to empty and fill fluids before setting off.  The birds are singing and a couple of dogs in a house across the road are having a good shout at the passing cars!

Our journey continued south, following the Atlantic coast but inland, through miles and miles of pine forest, broken up by the occasional group of cork trees.  We ‘baguetted up’ at a supermarket along the way and stopped for lunch in Seignosse. Hitting the outskirts of Bayonne, we turned off inland towards the east, with the foothills of the French Pyrenees on our right.  We could tell we were in Basque country by the multi-lingual road signs in French and Euskara, the Basque language.  It’s supposed to be like no other language, but sounds a little Greek to us when you say it out loud. The drive took us along winding roads, up and down through small, Basque villages, gradually gaining height.  The satnav guided us to the coordinates of the aire in Sare, only to find it had been converted into a ‘park and ride’ car park. So back down the hill we went and followed the main road until we saw the ‘Aire de Camping Cars’ sign, which is where we now sit.

We walked up the hill into the village.  Sare is a quiet, typically Basque village sat on a knoll-top, with traditional half-timbered houses and a Basque church with its three tiers of balconies.  There were a number of small bars and restaurants, along with the usual boulangerie and boucherie.  The community is well catered for, with a municipal swimming pool, medical centre, primary school (we looked for the lunch menu but couldn’t see it displayed outside, like most schools in France!) and also a lovely looking senior persons’ home.  In the village there’s a large Pelota Vasca (or jai-alai in Basque) court.  This is the national game, a form of handball played on a walled court known as a fronton.  There’s also a version involving the use of a txistera, a kind of hand-held whicker basket which allows the ball to be slung at the wall at speeds of up to 200 kph - it sounds very dangerous!  The court, with terraced concrete seating all around, had the look and feel of a gladiatorial amphitheatre.  I would guess it’s amazing to witness a game in full flow.

The village sits on the GR8 footpath and we saw a number of hikers. The aire is also a car park and is used as a starting point for circular walks.  Looking at the maps, I think this would be a great place to start a tour of the Pyrenees, travelling west to east, popping out the other end at Perpignan. It’s definitely an idea for a future trip.

With it being Mothers’ Day, Cathy had a well deserved snooze, while I cooked a Pork Keralan Curry with rice, enjoyed with a glass of wine and a great view over the Pyrenees foothills.  Tomorrow we cross the border into Spain and hope to bag a pitch on the aire in San Sebastian.  We’re really not city people, but it’s an opportunity not to be missed and part of the adventure.  Plus, after a week on the road, we’ve earned a night out….tapas here we come! 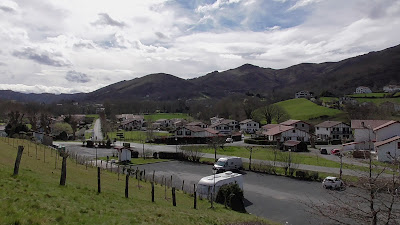 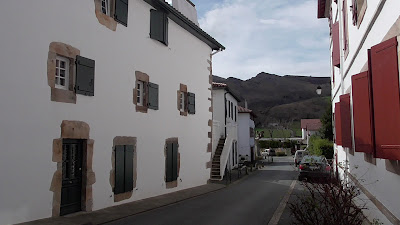