Nido’s parked up in a beautiful spot, next to a lake in Embalse De Los Bermejales, on the edge of the Sierra Nevada National Park.  It’s about 850m above sea level, so although the sun was warm during the day, as soon as it dipped below the mountains the temperature has plummeted.  It’s just starting to get properly dark so we’ll go out to take a look at the night sky later. The local lads and lasses are parked up here too; a couple of cars knocking out loud music from their speakers. But it’s decent music - none of that ‘pop a cap in your momma’s ass’ rap stuff, but some flamenco and a bit of soca!

I didn’t write up yesterday.  To be honest the drive from La Isleta towards Malaga just depressed me with the miles and miles of plastic covered land.  Before the motorway, we drove through the shanty towns of the migrant workers.  It really reminded us of some of the Afghan refugee camps we saw when travelling in Pakistan 30 years ago.  In fact much of southern Spain reminded us of Pakistan - the odd rich person’s villa, but mainly half-built, ramshackle buildings with plastic and tin roofs. We’d planned to stop at the Almerimar marina but on arrival it didn’t do it for us.  A stop at a large Carrefour supermarket topped up our victuals and we moved on to an aire at Castello de Ferro, near Motril.  Despite being near a main road and at the foot of a mountain, it was a lovely little stop.  We were only a few metres from the beach and had a sea view.  We sat out until the sun disappeared behind the mountain and fell asleep to the sound of the waves. 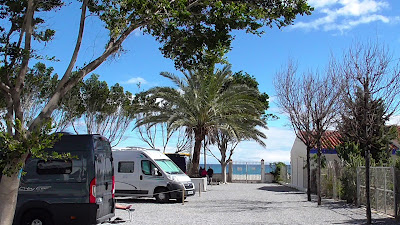 This morning we serviced the van and drove off to our next destination.  We have some books that list Wild Swimming spots in different countries. The one for Spain showed a lovely looking lake with opportunities for wild camping, so I plugged in the co-ordinates and off we went.  The drive took us high, up through the mountains, long tunnels and over very high viaducts (don’t look down!); Spain has completed some serious road and bridge constructions over the past ten years. We passed the high summits of the Sierra Nevada to our right, still covered in very deep snow; a couple of cars with skis strapped to the roof-rack overtook us on their way up to the slopes.  Stopping off in a small village for bread before arriving at the lake, we pulled into a large and flat(ish) area overlooking the water, waving to a family in an old French motorhome.  We were hungry so tucked into lunch with a great view, before driving off to do a lap of the lake, to see if there was anywhere else to park up.  The route brought us back to our lunch stop, so I found a spot to park, just in front of our French neighbours.  We spent a most enjoyable afternoon chatting with them and sharing a cup of tea.  They were quite young and had been on the road for 10 months, with their your 2 year old son.  Although from the north of France (Le Crotoy - a town we’ve visited a few times), they’ve bought some land in the south and plan to build an eco-house and develop a permaculture garden.  This is right up our street so the afternoon passed quickly as we shared ideas on water conservation, composting and other similar ideas.  Their son was delightful; his ‘no pedal’ bike was a bit creaky so me and him gave it a good oiling.  He enjoyed exploring our van and later I found the lights, hazards, indicator and wipers all switched on!  I gave him a mandarin orange and he insisted on paying me for it with a 1 cent coin.  After a walk by the lake we returned to the van to sit in the sun for a brew and to enjoy the late afternoon sunshine.  Our new little friend came back later - he’d worked out that if I had a big bike on the back of the van, I must also have a cycle helmet, which of course he needed to try on.  I reduced the size of the helmet and also the strap with a peg and he looked very serious riding his bike, keeping his head very still so the helmet didn’t fall over his eyes!

Now it’s almost pitch dark, the youngster’s music is still blaring, but their causing no harm and will no doubt leave soon.  The village drunk has been sat on a bench under the trees all day though, working his way through about 10 litres of beer and regularly asking our French neighbours for a light for his cigarette (and they keep telling him no, they don’t smoke).  The French guy is ex-Gendarmerie - you don’t mess with them so I don’t think the drunk will cause too much trouble! Having said that I might set the Strikeback Growler alarm tonight - the flashing lights warning if someone approaches the van might just move him on.

So after a bit of a stressful day yesterday, driving through the plastic, we’ve ended up in a beautiful place with some lovely neighbours.  We’ll enjoy the night sky later and, once the music stops and the cars leave, we’ll no doubt enjoy some peace and quiet. 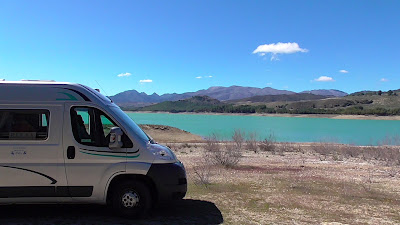 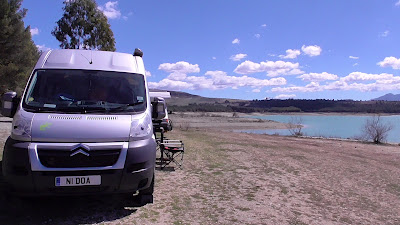 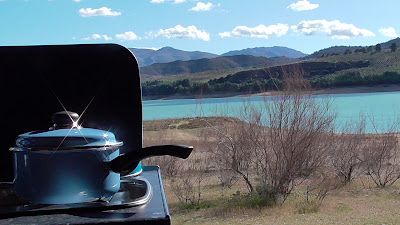