Now that the 2014 Tour route has been officially announced, I'm glad I booked us onto a campsite which is right on the Stage 1 route.  Ray will be coming up from Gosport and we'll be taking the campervan to spend 3 nights at the Velo Fest in Kilnsey in the Yorkshire Dales.

The first two stages are in Yorkshire and we'll be cycling out to see both from this campsite.  For Stage 1 we'll watch them pass right next to the campsite and then cycle across the Dales to (if we're in time!) see them pass again as they approach the finish in Harrogate.  For Stage 2 we'll probably cycle out to the route to watch them pass then head off for a more relaxed spin in the dales.

It's going to be great!

This weekend we headed to our favourite county - Dorset.  The main reason was to visit Chris at the Royal Armoured Centre, Bovington, where he's half-way through his Phase 2 training.  But it was also an opportunity to visit Weymouth, where we spent a lovely couple of years in the early 90s.

I finished work at midday and the first job was to drop Toby off at the kennels on the canal and feed & water the chickens.  Jobs done, we headed off for Dorset, via the Mid-Cheshire Van Conversion unit (see our separate blog on this life-changing decision!).  It was the usual manic, Friday afternoon drive, not helped when the 'Shat-Nav" took us through Bristol city centre.  We finally made it to the Premier Inn at the Dorchester Brewery Centre (like a mini Gunwharf Quays) and, dropping off our bags, went to eat at Carluccio's, enjoying calamari followed by a shared steak with a bottle of red wine.  Then it was time to crash out as we had an early start tomorrow morning.

Saturday 5 October
Up early, we were too full from last night's dinner to bother with breakfast. So after a cup of tea we headed off for the Bovington Families Day.  We parked at the Tank Museum, then took a mini-bus ride to the RAC camp, where we were met by Chris, looking very smart in his combats and 9/12 Lancers beret.  We headed up to the lecture hall where Lt Col Nurton introduced the day and talked more about the Phase 2 training.  After that the families broke into 3 groups.  We first headed off to watch a demonstration of the different types of armoured vehicles driving on the range.  First up was the Challenger 2 Main Battle Tank - it was smaller than I imagined, but I still wouldn't want to meet it down a dark alley!  Next was the Warthog which I've seen in action with the Royal Marines.  Finally, it was Chris' weapon of choice - the Scorpion.  This is a small, but power-packed and fast Combat Vehicle Reconnaissance (Tracked) - CVR(T). It travels really fast and brakes even faster!  After the demo we had the chance to clamber over the vehicles.  Chris explained how the Scorpion works and the maintenance tasks he's learned.  Cathy wasn't so sure about being strapped into the Warthog though!  After that we had a demo of the Military Annual Assessment Test, then we headed off to visit the PRI shop, where I treated Chris to a 9th/12th hoodie and t-shirt (I had a t-shirt also).  We also visited his room - very neat and tidy!

Lunch was Pay as You Dine (PAYD) - but free for us.  PAYD came in during my last year in the Royal Navy. Basically, rather than having a standard food charge deducted from monthly salary, you have to pay for the food you eat. It's aimed at providing more options and choice as to where and when you eat.  Although Chris had moaned about the food, it was actually very tasty and filling.

After lunch we headed off to see what they learn when it comes to driving and maintenance. Having looked around some of the latest vehicles, we went off to the Simulators, where I had the chance to drive a Challenger Two tank!  The simulator was very realistic and my 20 minutes driving flew past - I really got into it.  After that we headed off to the CIS school, where we learned a bit more about the Bowman system and operational comms.

The final part of the day was a demo of fire and manoeuvre, based on an attack on an FOB in Afghanistan.  This involved a section of 8 soldiers plus a Scorpion CVR(T).  This was great to see and after the final closing speech by the CO, we visited the tank museum with Chris.  Saying our farewells, I dropped him off at the camp, before we headed back west.  It was a great day with him and lovely to see where he lives and what he gets up to.  Good luck with the rest of your Phase 2 training Chris - maybe see you in Germany next year!

On the drive back we decided to head into Weymouth to have fish & chips on the beach - these were very tasty!  It was warm and sunny and there were people swimming in the sea at 6pm - in October.  We had a walk around Weymouth - some of the shops from our time living there 20 years ago were still open, others were long gone.  We returned to Dorchester and headed out for a drink before crashing out.

Sunday 6 October
Sunday morning was bright, sunny and warm.  Having checked out we headed into town and enjoyed a Wetherspoons breakfast before driving home.  It was a great weekend and we felt very privileged to see Chris in his working environment.  He really impressed us with his knowledge and skills.  He picks up his car next weekend and we hope he has a safe drive north - he's come a long way in 6 months.  Keep going mate, crack on and we'll see you in Hohne next year! 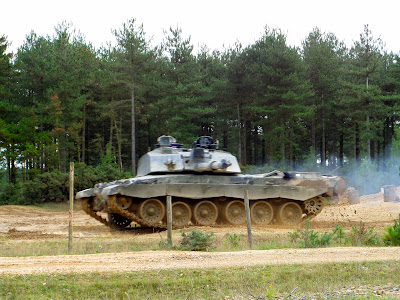 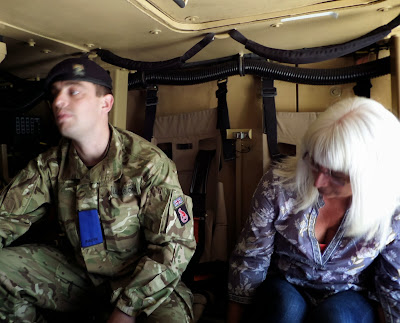 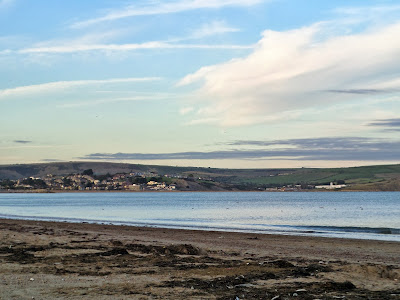 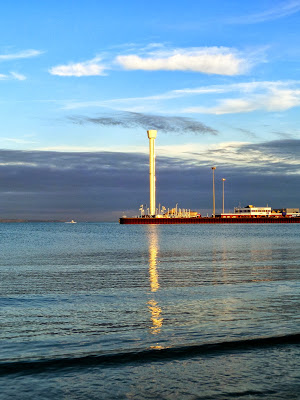