Hearts of Oak have our Ships...

Nido’s parked up in an aire at Sanlucar de Barrameda. It feels more like a rustic campsite, with grass pitches, toilets, showers and washing machines.  And we have electric hook up and WIFI, plus unlimited fresh water and somewhere to empty the loo!  For those of you sat at home who’ve not spent time in a campervan, you might think I’m a being a bit giddy.  Well I am, although the gin might be helping!  We’ve been relying on our leisure battery, solar power for a couple of weeks.  When we’re wild camping, fresh water and power is a precious commodity, not to be taken for granted or wasted.  Lights and pumps are only switched on for as long as needed.  For the loo, we have a spray bottle with a mix of flush fluid and water to save precious fresh water (isn’t it weird that we waste perfectly good drinking water to flush our loos at home). Grey water (washing up and showers) is used to rinse out the loo cassette (or even my coffee pot!).  So we’re a bit giggly about being able to flush the loo and leave lights on for more than a few minutes. It’s a nice little aire and the manager - Alfonso - is charming and helpful.  It’s down a dead end road to the sea, although the beach is a bit industrial, with the brown wash associated with a large estuary.  It’s relatively quiet, although we did have several dogs barking and even a peacock calling.

This aire wasn’t our first choice.  On the way out we stopped off at Conil de la Frontera (by a noisy road and a smelly river) and Sancti Pentril La Barrosa (nothing much but sand and mud) and then moved on towards an aire at El Puerto De Santa Maria. I’d booked us into a campsite for 3 nights in this town, with the intention of taking the ferry to explore the old town of Cadiz for some sherry and tapas, plus some beach time and cycling.  The campsite was close to the beach but driving through the metropolis left us cold (if you’ve followed us for a while you’ll know we’re severely allergic to any form of busy town or city).  So it was another change of plan (and an email to cancel the campsite booking) and a push on to our current spot.  We ended up here, with a loose plan to make a long run to Portugal tomorrow, although if we find somewhere to wild camp in the Huelva wetlands on the way past Seville, we will do.  On a similar note, we saw our first flamingoes today!  They were in the wetlands (rice paddy fields?) to the north of Cadiz.  Cathy loves flamingoes so it was unfortunate we were on the motorway with no opportunity to pull over and watch them.

Back to first thing today.  We slept well at last night’s lovely stopover. I was up at 0900 and wandered into the town for some bread; it really was like some of the lovelier coastal parts of France - back two or three streets from the main drag were small shops, bakeries and cafes, vying with the (closed) posh clothes and ’trinkets’ (ornaments) shops.  I bought some freshly baked (still very warm) bread and rolls  from a panaderia, then stopped off at a small shop for some eggs and olive oil.  Back at the van, we had what is known in the Royal Navy as a ‘Lazy Sunday Routine’ - no ‘Call the Hands’ (alarm clock) and brunch - in our case fried eggs and fresh rolls and a pot of tea (C) and coffee (me).  The gas was on for hot water and we enjoyed our showers, drying off the towels in the warm sea breeze.  Zahara de los Atunes is a lovely town and one we’ll revisit if we return to this part of Spain; the Costa de la Luz is definitely our favourite area so far, although we’re really looking forward to exploring north-west Spain.

Moving on, our next stop was Los Canos de Meca.  This was once a hippie hideaway, straggling along a series of sandy coves beneath a pine-clad hill 12km west of Barbate (where I went to empty our loo but refused to pay €3 for the privilege!). It’s a very laid back place and another mecca for the kite surfing community - we parked amongst the ‘dudes’ with their wet-suits, dreads and beards, in their self-converted vans.  We feel much more comfortable around them.  But I wanted to come here for another reason….

…at the western edge of the village a side-road leads out to a lighthouse on a low spit of land with a famous name:  Cabo de Trafalgar.  Off here, Spanish naval power was decimated in a few hours on 21 October 1805 by a Royal Navy fleet under the command of Admiral Lord Horatio Nelson.  He - and many hundreds of his shipmates - paid the ultimate price on that historic day.  As I walked along the beach, now full of kite surfers, I imagined the flotsam and jetsam being washed up onto these shores.  What did the locals do with the bodies of the battle-damaged or drowned sailors? Did they give them  a good Christian burial, or empty their pockets, strip them and push them back out to sea - life was hard then.  I soaked up the view and atmosphere as I walked along the beach towards the Cape.  Once at the point, overlooking this evocative area of the sea battle, I found myself heartily singing “Hearts of Oak”.  Standing to attention and a salute, I just stood and looked out to sea…so much history.  I’d sailed to the Battle of Trafalgar area before.  In 1981, on our way to Gibraltar in HMS BRILLIANT, Captain Coward ordered the ship to stop over the exact spot where the battle took place.  He led a ceremony of remembrance and a wreath was laid.  I’ve spoken to others who were onboard and they remember Captain Coward had a bottle of Port that was carried in one of the Ships of the Line that fought on that day and everyone had ‘sippers’.  I don’t remember the Port but have no reason to doubt my shipmates.  Walking back, we stopped off and enjoyed a delicious vegan lunch in a small ‘hippy’ enclave.  We also bought some organic cakes, some of which we enjoyed with a brew back at the van (and we still have some left over for tomorrow).

So today has been a personal high - visiting the area where the great Battle of Trafalgar took place.  Now, as we charge up ‘All the Things’ on our precious electric hook-up, we’re looking forward to moving into another country tomorrow (if we get that far), although putting our clocks back one hour (to match UK time) isn’t so great - we’ve become accustomed to late evening sunshine.

PS - today marks one month on the road. We’ve come a long way in 28 days and are looking forward to the next two months of this epic trip.  We’re loving our gap life! 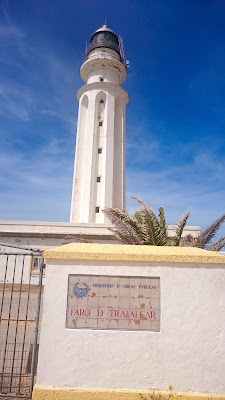 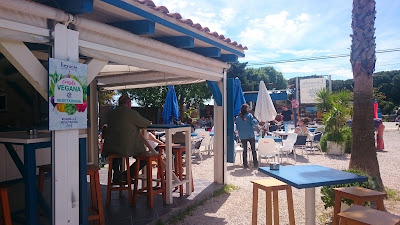 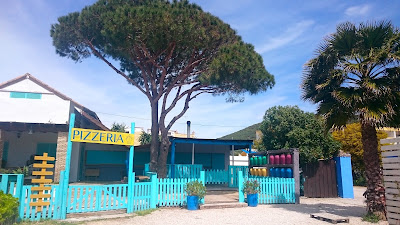 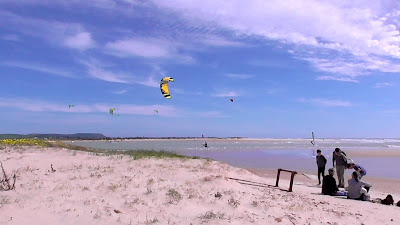 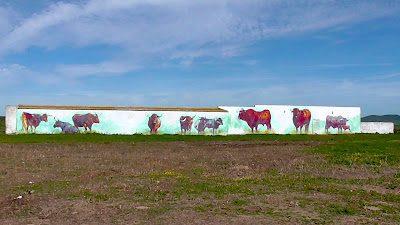