Today has been our best day so far.  We’re where we love - deep in the countryside in the peace and quiet.  Nido is parked up in  a free aire in the village of Suera, about an hour inland from our last stop.  I stopped off at a Repsol for diesel (food for Nido) and a Lidl (food for us), before we drove inland.  We passed through an industrial area into the town of Onda. Now, if you’ve ever bought bathroom or kitchen tiles in the UK and they come from Spain, it’ll be from Onda - ceramic factory after ceramic factory.

After Onda we only had about 7km to our destination, so I was getting a little worried that I’d picked an aire in the middle of an industrial estate.  But I shouldn’t have. We were very quickly climbing up into the hills.  Turning off the main road we reached the aire in Suera; it used to be the car park for the village municipal swimming pool.  The pool was still there - but sadly empty - although the pool bar and restaurant was still on site and doing trade to the passing locals.  There were 3 vans already parked up - two German and one Spanish. The German vans were occupied by older chaps (grey ponytails!) with off-road motorbikes to enjoy in this wild countryside.  The aire’s electric was switched off, so on to gas we went.

Lunch done, we had a quick walk to get our bearings - a typically Spanish village, winding up a hill with narrow streets.  One of the local old boys told us (in Spanish) that, if we walked up there (pointing up the mountain), we would find mucho wild asparagus!

Back at the van, we followed the signposts for the Castle de Mauz.  We could see it way up in the distance, on the highest hilltop.  The trail took us past lovely ‘allotments’ and fincas down in the valley, before we started to climb through pine forest.  The track was very rocky but easy to follow.  The flora was abundant, in particular wild herbs; we picked three types of rosemary, some wild thyme and sage, all now drying in a cloth bag hanging from the cab roof.  We were the only ones climbing and the silence was deafening.  With the odd stop for some water and to catch our breath, we eventually made it to the base of the castle.  It is Muslim in origin and dates back to the 12th Century. Goodness knows how they transported the stone to make it, although then I guess labour (and life) was cheap.  On the way up we passed several old stone buildings, which I would imagine were staging and resting posts for those transporting building material and other goods up to the castle.

At the top, the views were breathtaking, especially down the valley, past Onda and onto the Mediterranean.  It was quite chilly up there and the castle remains were far from safe, so we treaded carefully. But the peace, quiet and atmosphere was enchanting.  We took a different route down, past the original Muslim hamlet of Suera, which supplied the castle before the modern village was built.

Back at the van, we enjoyed a cuppa, hot showers and a glass of wine before walking up the hill into the village - we were hungry!  Now, anyone who has visited the real Spain will know the locals don’t eat much before 9pm.  So when we turned up at the village bar at 6.30pm, enquiring about Tapas, the bar owner’s incredulous look was understandable…he had to ring his wife and tell her someone wanted food this early…and she would not be happy!  To his credit he kept his cool and took our order although, when his wife turned up 15 minute later, the look of thunder on her face suggested we were in the doghouse! However, we told them (in Spanish) that we were sorry and the English eat early in the evening - after that smiles all around (or it could have been wind!).  It was a typical local bar - functional tables and a large TV in the corner, showing a quiz show hosted by a transvestite!  The tapas we delicious - calamari, patatas bravas (with the most amazing garlic sauce - the wife gave us the recipe) and ‘fried tails’ - aka pork tail scratchings - all enjoyed with some wine.  Cathy did well with her Spanish, including apologising to the lady for dragging her away from home to cook our tea!  When I asked for the bill, it was spoken, not written, but several locals piped up in English how much it was i Euros!  Sated, we walked downhill to the van. It was very chilly by the time we reached home - we might need the heating on in the morning! 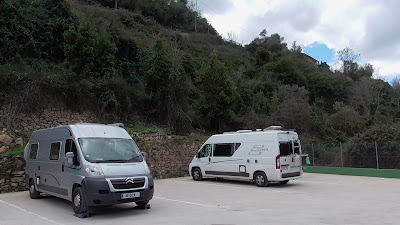 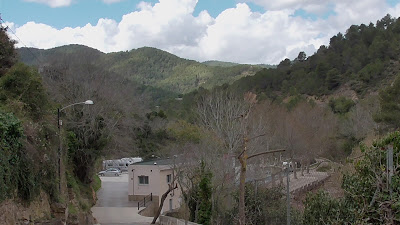 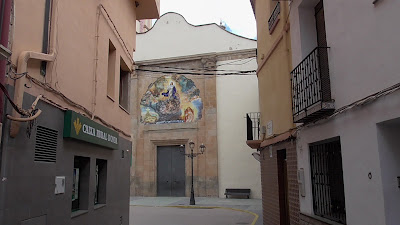 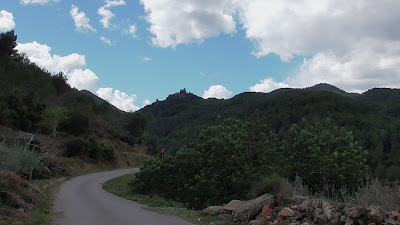 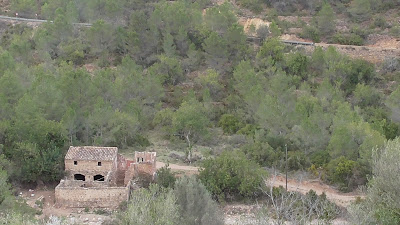 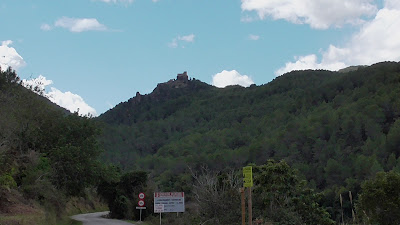 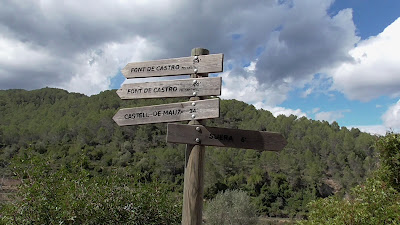 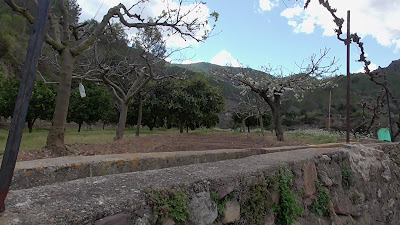 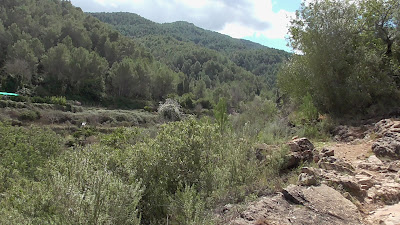 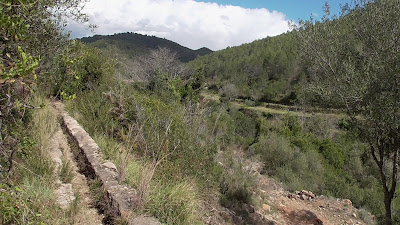 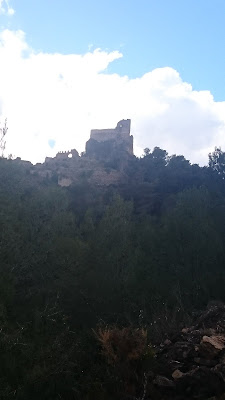 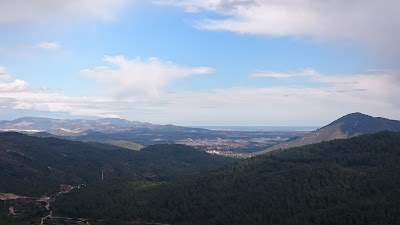 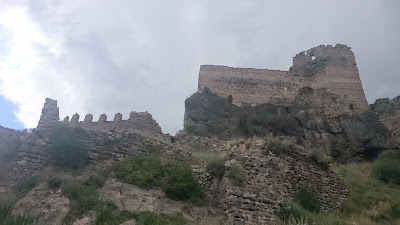 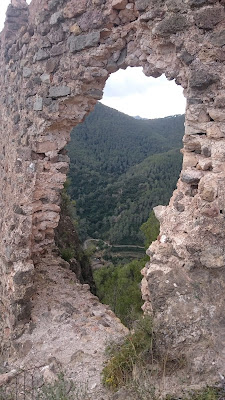 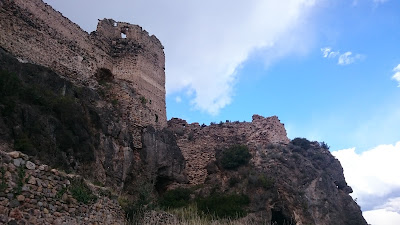 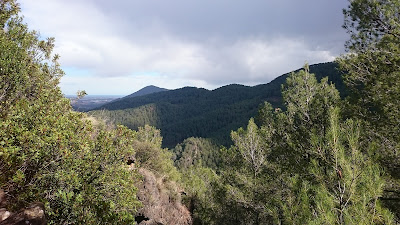 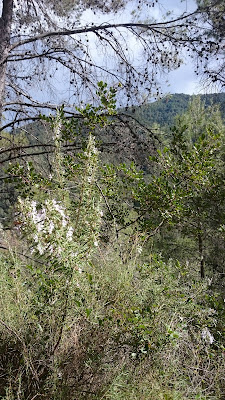 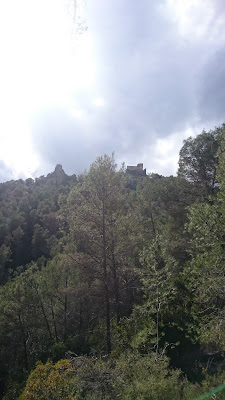 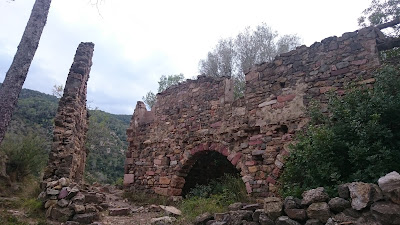 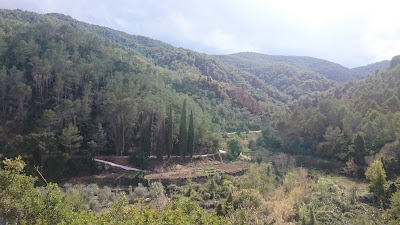 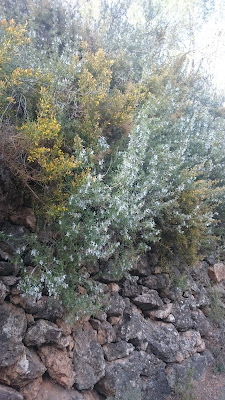 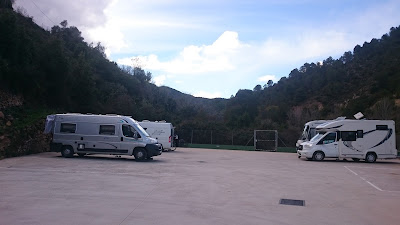 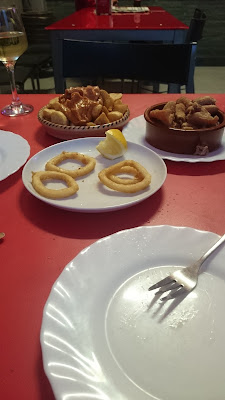 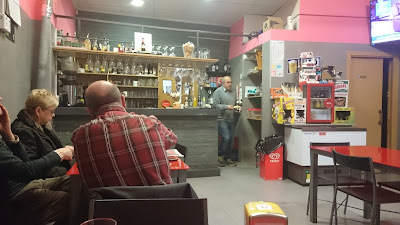 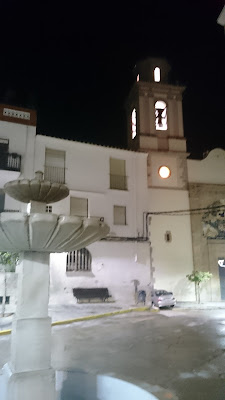 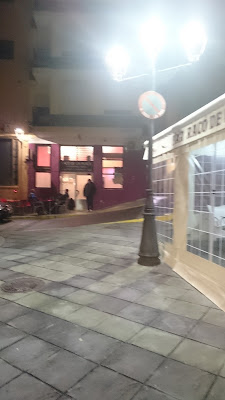