The wind gods were back with a vengeance last night!  From about 2200 off-shore storm force winds from the north-west battered the van.  It was extremely gusty and I could hear it running down the valley towards the sea before it slammed into the side of the van.  Although we were semi-protected by a large motorhome next to us, it felt like being back at sea.  We’re on solid ground, albeit on a cliff top and lifted up on one side on levelling blocks, so I knew we weren’t going anywhere, but it still didn’t stop me thinking it!  Motorhomes continued to come and go through the night; I think a few decided to leave to try and find some shelter.  It also didn’t help that I had a pot of coffee before bedtime - schoolboy error. So little sleep was had.

We woke to grey skies and a short but sharp heavy rain shower, but this soon disappeared.  The wind was still up although not as strong, so we walked through the village and up on to the top of the bigger of the ‘small’ islands that gives this village its name.  Great views from the top, before we walked up the hill to buy some bread.  As we reached the shop the bread van had just turned up, so to give him time unload we carried on up to the viewing platform at the top of the village.  There were some information boards about the surrounding area, in particular the two extinct (freudian) volcanoes across the bay and the alluvial plain leading down the the sea.

Back at the van, we sat on the lee side in the sunshine, enjoying our breakfast of eggs and baguette.  Cathy had found a path up the side of the hill yesterday, so we followed that up, past many different plants, including orchids and birdsfoot trefoil.  There were a large number of big thyme bushes and loads of other bright flowers we didn’t recognise.  This local diversity brought with it plenty of insects, bees, moths and birds, so we enjoyed the walk. At the top of the hill we spotted a small cove and rocky beach. It looked lovely so we carefully made our way down the hillside, sliding down loose, dusty scree, past areas of ground grubbed up by wild boar (I think - glad they were long gone!).  We made it safely to the bottom and had this little beach all to ourselves.  The water looked so cool, blue and welcoming….we hadn’t bought any swimming gear with us, so there was only one thing for it…..skinny dip - or in our case chunky dunk!  Cathy went first and when I was reassured no sharks, crocodiles, snakes or other sea monsters had eaten her, I followed.  This was our first sea swim of the year; it was ‘refreshing’ and with the slippery boulders at the wave breaking line, there was little option but to just get straight in!  Our whoops of delight no doubt echoed around the hills and it was just as well we didn’t have an audience - no idea what we’ve had done if anyone had turned up!  We dried off in the sun, enjoying the after-affects of our revitalising sea-swim.  The path back took us a different (and safer!) route along a well-marked track, past some lovely old eucalyptus and palm trees.

We’d decided to have lunch out today, only our second meal out since leaving UK.  It was still very windy, although the sun was shining brightly in a deep blue sky. We sat outside and let the waiter explain to us what tapas and fish was available today.  We opted for a mix of tapas plus a shared plate of calamari.  Our beers came with a complimentary tapa of migas, the local speciality of breadcrumbs fried in olive oil and garlic.  I suspect it wasn’t the best example as it was a bit soggy and we had expected the breadcrumbs to be crisp.  We enjoyed our lunch (we have a monthly ‘fun money’ budget for eating out, drinks, site entry tickets etc), although the cats and little puppy sat expectantly under our table waiting for titbits were less impressed, and soon moved on to look up hungrily at other customers!

We both enjoyed a snooze in a now very warm van, again buffeted by strong winds. Looking online, I suspect this is part of Cyclone Hugo that’s currently battering the Bay of Biscay and some parts of northern Spain.  The clocks go forward here tonight - as well as the UK - and I’ve already done ours so we’re enjoying an extra hour of sunshine this evening….if only this wind would b*gger off!  We’re moving on tomorrow.  The inside of the van is coated with a fine dust blown in by the wind and as for the outside - poor Nido is looking very grubby but, like a cub scout who returns from camp with a dry towel and flannel, I suspect he’s enjoying being a bit dirty behind the ears!  There’s no point worrying about it while the wind continues to blow and we’re parked on dusty ground.

Today would have been my lovely Dad’s 77th Birthday; can’t believe it’s ten years since he died.  Him and mum would have loved this little village.  My mum was known to enjoy a skinny-dip too and they both loved their seafood; perhaps they were sat at the table next to us….feeding the cats and puppy! 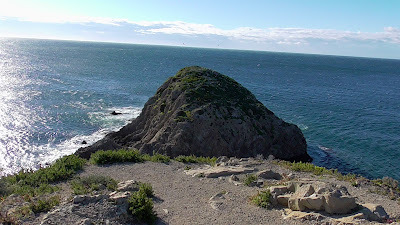 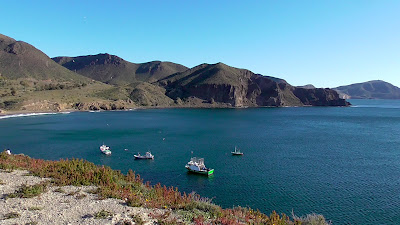 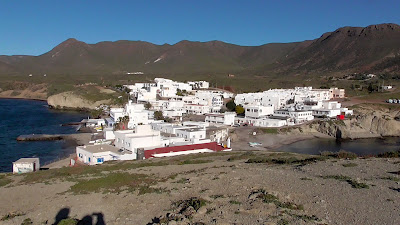 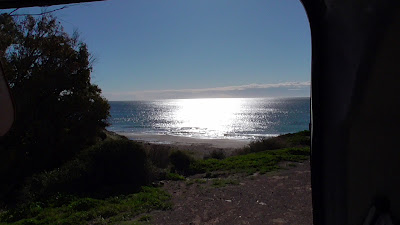 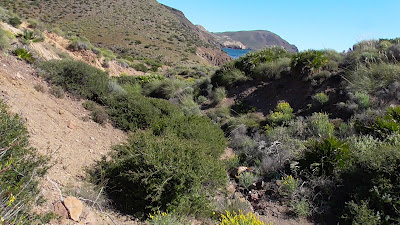 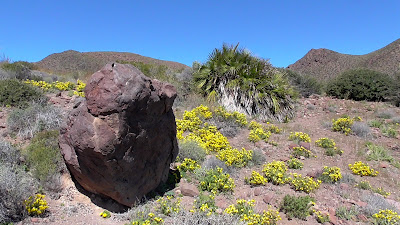 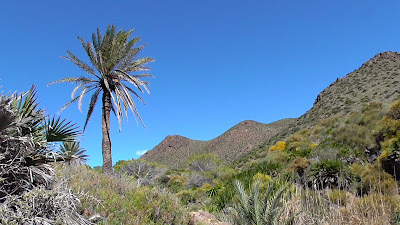 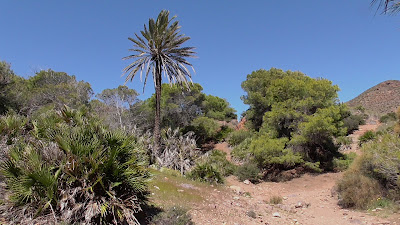