A couple of weeks ago we booked onto a CL next to the Old Racecourse above Oswestry and just on Offa's Dyke Path.  I'd booked the afternoon off work, which allowed us to pick up the van from storage and drive the hour or so to the site.  The CL was grassy with outstanding views looking south towards, with hills in the distance and the Welsh border over to the west.  On arrival we picked a pitch looking over the plain and the owner (who was enjoying a sneaky beer with his oppo in one of the caravans!) popped over to say hello. Quickly hooked up, we enjoyed a brew sat in the cab seats admiring the view while our dinner cooked in 'Oska.


We slept well, although it was quite cold in the night.  A combination of the cold plus a slightly wonky pitch - even though we were on levellers - meant the fridge didn't want to play.  It refused to chill on any form of power, so my concern was that it was dead, which would be a very costly replacement (on a later trip it seemed to be working OK).  Although we woke to lovely sunshine, the weather forecast was a bit iffy but we'd planned a walk. Cathy had already prepared our lunch and with rucksacks packed, we left the CL and followed the Offa's Dyke Path south, through a pine forest and heading downhill towards a small hamlet and stream. The walk took us through rolling fields, although the views were restricted by the occasional rain and hailstorm!

On the way we came across a lamb that had been born just a few minutes ago - it was shivering more than us!  Shortly after we stopped for lunch on some rocks on a hill.  Some people were out hare coursing with terriers to chase them out of the gorse to the waiting guns.  As we sat eating, a hare popped out of the woods to our left, looked across to the guns (who had their backs to us) and legged it across the hill and away - how we cheered it on! The 8 mile walk finished off with yet another heavy hailstorm and we returned to the van looking a bit bedraggled, but felt much better after a hot shower, change of clothes and a brew.  That evening was clear and with no artificial light, the views of the stars were amazing.

Sunday morning was cold and bright.  After breakfast and securing all away we attempted to reverse off the pitch and sank in the mud!  The owner and his mate, plus a caravan owner with a 4 wheel drive came to our rescue, towing us off.  We headed off to spend a bit of time at Chirk Castle, using our National Trust membership.  We found a sheltered spot in the sun by the castle and sat on a bench soaking up a few rays, before returning to Nido for a brew and a slow drive home.

A quick weekend away to break the monotony of what feels like a never-ending winter. 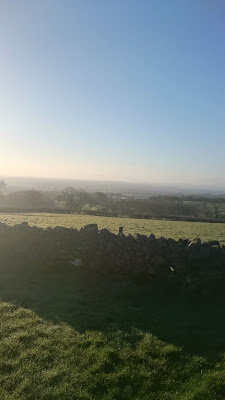 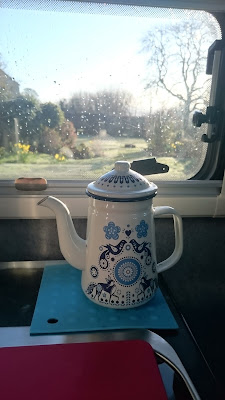 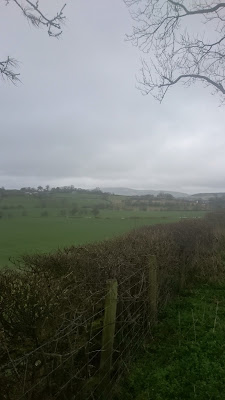 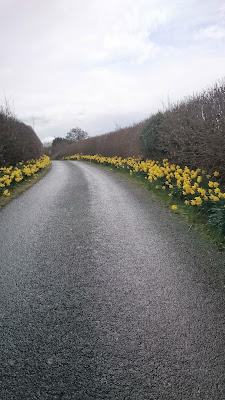 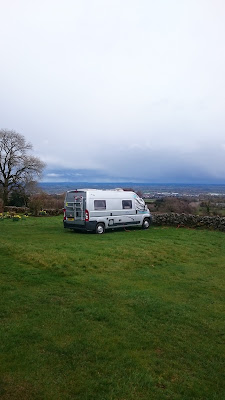