Nido is parked up at a new aire in Mimizan, on the Atlantic coast.  It wasn’t our first choice as the one we wanted to stay at, next to the beach, has been closed down.  This one was the older, cheaper aire (in my Camperstops 2015 book) that has been completely redeveloped.  It’s further away from the beach and village and more expensive.  But, hey, we’ve had a few free nights so it all evens out.

We caught the 0900 ferry from Blaye to Lamarque, with the crossing taking about 20 minutes.  It’s not that cheap, but it was a good experience.  On the other side the feeling was much different; we were ideep in Bordeaux wine region, with many family Chateaux and lovely single storey buildings with red tiled rooves.  Our first stop was a Lidl in Arcachon to top up with groceries, including a couple of the infamous ‘bricks’ (cartons) of Spanish wine - €2.19 for 1.5 litres - I’ll let you know later how it tasted!  Next stop was the Dune du Pilya, the largest sand dune in Europe.  It peaks at about 110m above sea level, 2.7km long and 500m wide.  I had scoped out some possible parking spots on the side of the road on Google Earth, but driving past them they looked a bit too sandy and I didn’t want to get stuck, so I doubled back to the large (and expensive) car park.  Logistically, I hadn’t planned well with it being Saturday, but even so it wasn’t too busy.  It was warmer this morning so it was out with the shorts! A short walk past the grockle shops and we reached the base of the dune.  The path was clear from the many who had already climbed, so it was just a matter of following in their footsteps. We stopped a few times to admire the view (aka get our breath back!).  It was windy so the sand was being whipped up around us as it poured over the top of the dune - I’m sure we lost a few layers of skin!  Once at the top we took a few photos and looked out to the Atlantic, before bounding down the steep side - now that was fun.  It was a good experience, not one to repeat, but ticked off the task book of life.

A few miles south we pulled into a car park at Plage de La Lagune, amongst the pine trees and close to the beach for lunch.  We had a good walk along an almost deserted beach, with the Atlantic surf pounding away. Obviously a paddle was had - not too cold.  Onwards we stopped again at Lac du Nord, a very large lake with the typical beaches, swimming areas and marinas. We took a cup of tea down to the beach and enjoyed the peace and quiet and the warmth (it was up to 20’C). So although disappointed with the aire, at least we have electricity tonight and will have a lazy start to the day tomorrow, before continuing our journey south.  I suspect we’ll have one more stop in France before crossing the border into Spain - no point in rushing.

PS - the ‘Chateau de Lidl’ takes some getting used to, but it improved after a glass and is in keeping with our budget! 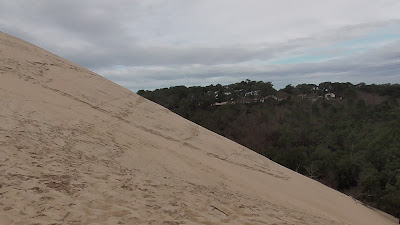 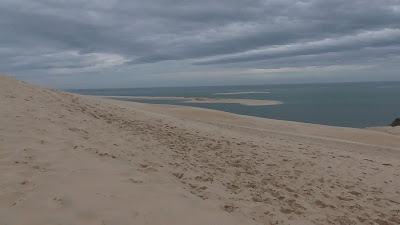 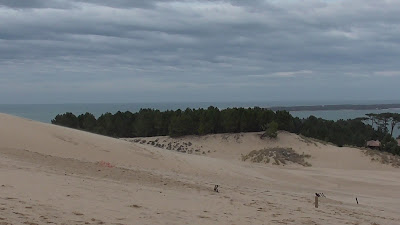 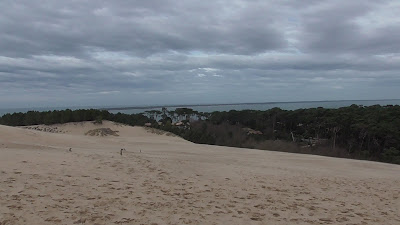 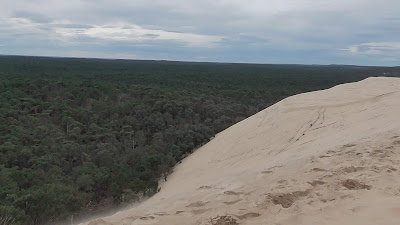