We'd planned a short trip away in the van during September and it tied in nicely with two stages of the Tour of Britain passing through Wales. Stage 4 was from Aberaeron to the Great Orme in Llandudno, so I took a look at the route to find somewhere easy to park up and not too busy.  The Harlech Leisure Centre allows motorhomes and campervans to park overnight in their car park for an £8 fee.  There's no facilities, but it's well situated just back from the main road, under the castle and only a short walk from the long, sandy beach.  So this set the start of our short four day trip along the West Coast of North and Mid-Wales.

It was a really hot day as we set off from home, with the forecast showing a couple of days of exceptionally hot, humid and sunny weather.  Harlech's only about 45 miles from home - so about 1.5 hours in the van.  We arrived at the Leisure Centre and parked up with a few other vans.  I popped into Reception to pay; they were very welcoming and friendly and said we only had to pay the night fee of £8 and that would see us through until after the Tour had passed through tomorrow.  We packed our beach stuff and walked about 15 minutes to the dunes and beach. It such a hot and sunny day so it was quite busy, but the beach is huge so there was plenty of space.  One side has summer dog restrictions, so we turned left from the dunes and found a spot to drop our bag and take Salty for a paddle.  We both enjoyed a sea swim and dried off before heading back to the van.  There was plenty of space in the car park, so we followed the lead of other vans and got our seats out to sit in the shade - it was 34ºC inside the van!  The rest of the evening was spent sat outside reading and, when I took Salty for a walk at 10.30pm, the air was still very warm.  It felt just like a warm summer's evening on an aire abroad. 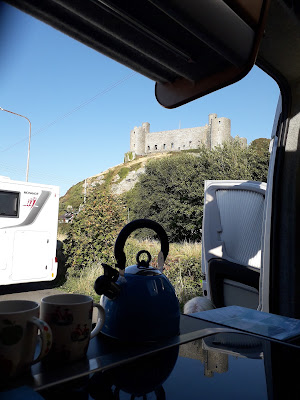 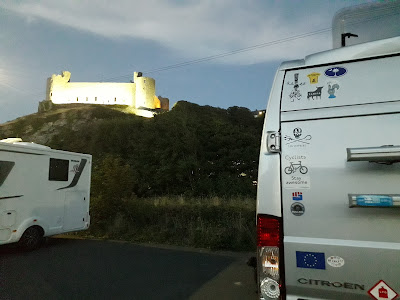 Despite being quite close the main road, it was quiet at night and we slept well.  We took a morning walk back to the beach to avoid the heat of the day.  Cathy settled into her chair in the shade and I wandered over the rail track and road to grab a coffee from the cafe and wait for the Tour.  I knew I had about an hour's wait, but it was a good atmosphere and I got chatting to some of the locals who'd come out to watch.  The excitement mounted as the Tour and Police motorbikes started to come through, followed by a couple of the Tour safety cars.  There was a breakaway of about 5 riders who were a few minutes ahead of the rest and I took some photos as they passed through, then put my camera away so I could cheer on the Peloton as they came hurtling through.  One of the Deceuninck-Quick-Step riders through his musette (feed-bag) down at my feet as he cycled past, so I happily gained a souvenir!  The Tour of Britain isn't quite the same as the Tour de France and is missing the Caravan that passes through in advance, but it was still a great atmosphere and, with such a hot, sunny day, it did feel like being in France!

Our park-up for tonight was an area next to the sea near the village of Borth in Ceredigion, called Ynyslas Borth.  It costs £10 to stay for the night and, again, there aren't any facilities, but it's a nice quiet spot, popular with all types of motorhomes and campervans.  There was someone collecting the money and the height barrier is closed at 8pm.  The weather was starting to change and it was cloudy, but it still felt warm.  We took a walk along the pebble beach and had a pre-supper drink overlooking the sea, using the sea wall as an impromptu bar.  Again, it was a lovely quiet park-up and we fell asleep listening to the waves breaking. 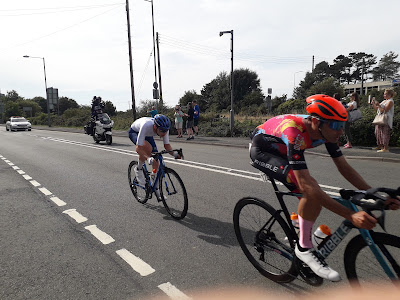 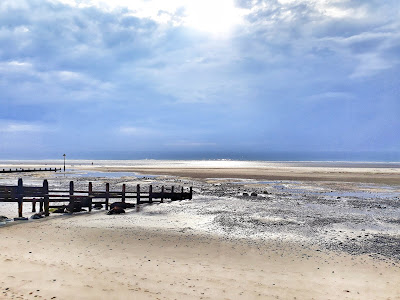 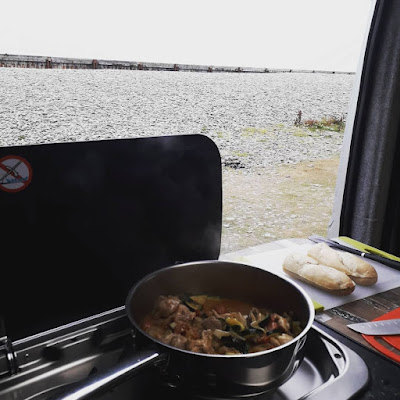 We had a lazy morning with another walk before driving the short distance to Aberystwyth, just a few miles south.  Before we left home I'd emailed the town's rugby club, who run something similar to an aire in their car park. For £10, we had a safe parking spot (with the gates locked) and access to a loo emptying point and fresh water.  I had paid in advance online and they had sent me the code for the gate lock, so we were able to let ourselves in and park up.  The walk into town was through a small park and it was busy around the shops, bars and restaurants.  We took Salty with us and had a wander along the promenade (the north beach is off-limits to dogs in the summer) before heading back to the van for lunch.  Later we left Salty in the van and walked back in to wander around a bit more.  By now the rain had started and became heavy, so we darted into a pub to shelter!  We haven't been in a pub for quite a long time (a few years maybe) and so I was a bit surprised at the cost for two drinks!  On the way back we ordered some food from Mama Fay's - a small Caribbean restaurant - and took it back to the van.  The curried goat and rice and peas were delicious.  The jerk chicken was succulent and tasty but could have been spicier, but we enjoyed it.  Aberystwyth is worth a visit if you need to stop somewhere to empty the loo and top up with fresh water.  However, we felt the town was a bit tired, sadly the same as many of the UK coastal towns that have suffered in recent economic times. 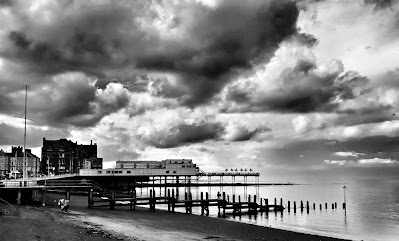 Our final overnight stop was a pub parkup - the Bryn Arms in the village of Gellilydan, directly opposite the CMC Coed-y-Llwyn Club Site and just north of Llyn Trawsfynydd.  They allow motorhomes and campervans to park up in their car park if you buy a meal in the pub.  Although the pub's dog-friendly, we're not convinced Salty is pub-friendly, so we left him in the van!  We enjoyed a good meal in the pub and had a quiet night's sleep.

The plan today was to find somewhere to stop for breakfast and lunch on the way home, which was only about an hour away.  We'd have liked to have parked up by Llyn Trawsfynydd, but all their car park have height barriers, so instead I drove us to Dinas Dinlle, a free parking area by a long pebbly beach and next to Caernarfon Airport, where the Coastguard helicopter is based.  We chilled out there for the rest of the day, before heading home.

This was a short trip, really just to get away for a few days and enjoy the hot weather, but also to allow me a pro-cycling tour 'fix' as we weren't able to travel to France in June to watch the Tour. We've pretty much covered this area of Wales now, so our next trips will probably be a bit further afield in the UK, although planning for a longer trip to France next year is in progress.....