We’ve moved 20 minutes up the coast to a large aire at Manta Rota.  It takes 100 vans and is pretty much full. Manta Rota is a nice little spot - a mix of old and new single storey houses with the typically narrow streets, with plenty of bars, restaurants and little supermarkets.  A number of vans have clearly been here for a number of weeks, if not months, looking at their pitches. Some have put up permanent windbreaks and have full-size dining tables and even potted plants outside!  OK, it’s fine for a few days’ stopover, but not somewhere I’d want to spend several weeks.  Given it has 100 vans, it’s disappointing to find only one service point and one tap for emptying the loo and filling up with fresh water.  There is electricity but, at €5 per day, we’ll stick to gas and solar thanks.  One of the comments on the Campercontact app made me laugh (and has a grain of truth): "This wonderful place has degenerated into a wretched gypsy camp. More than half of the sites are occupied by permanent campers, who, although electricity is possible, daily ruthlessly run generators and have set up home with front yards. They also determine who stops where. The very unfriendly staff does not care what happens on the court. Very bad!"

The aire is close to the very long white sandy beach; we took a walk along it today, although the incessant Force 5-6 wind made it quite tiring - it’s been non-stop windy for the past three weeks.  However the Atlantic was surprisingly warm and, but for the wind and waves, we’d happily have gone for a swim.

Although there are lots of vans here parked in lines, we still have some space and privacy to put out our chairs and a table; it’s been one of the few times this trip we’ve been able to sit outside during the day.  Cathy did a load of dhobying, which dried nicely on a line strung between the trees (thank you wind!). We walked into town to have a look around and buy some groceries.  The rest of the day was spent either walking on the beach or sitting outside reading. 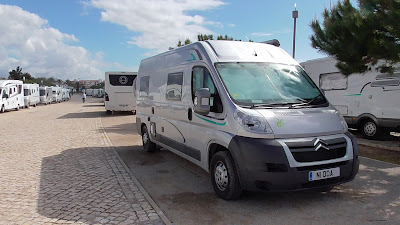 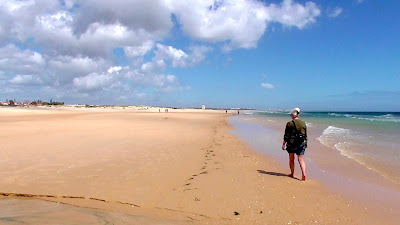