We’re back in Spain and very happy!  We’re parked up in an aire in Arcade in Galicia.  We have a great view of a fjord-like bay, with gin-clear water and plenty of large grey mullet swimming around.  The hills are green, the blackbirds are singing, we have an extra hour of evening sunlight and we like it!  Portugal was oppressive.  Since arriving in Spain and parked up, we’ve watched children out playing football and laughing. It made us realise that we didn’t see a single child out playing in Portugal.  Also, they have roads in Spain! Real roads with no bomb craters, loosening your fillings and wrecking your van.  Again, I’ll say this is our observation, and others will love Portugal, but its not for us.

We had planned to stay overnight in Portugal at Esposende; it sounded good on paper.   However, on arrival it was a large car park, in front of a busy bus station, with HGVs coming and going.  It was about 1km from the coast - typically for Portugal, stuck in the middle of nowhere.  But it was an ideal place to stop and take a long, hot shower, as we could empty the grey water and top up with fresh.  It was warm and sunny, so we made the most of the stop. Feeling refreshed, we drove on, but not before I’d moved us one hour ahead to Spanish time.  Once over the border, we enjoyed the smooth roads and made our way to our current stop.

We’re now parked up between two Dutch vans. It’s a typical Spanish town (ie laid-back) and we’re between the working port and the marina. As I mentioned above, the view is like overlooking a Scottish loch or a Norwegian fjord - we like it.  We had a wander and a chat with our Dutch neighbours before I cooked a pork curry with rice. I think we’ll sleep tonight and we’re looking forward to exploring Galicia.

We also survived Friday the 13th! 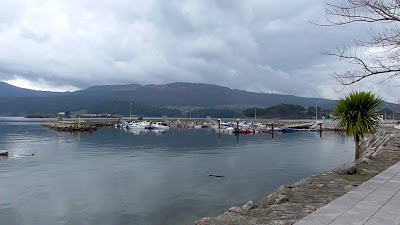 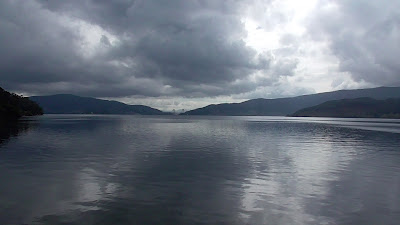 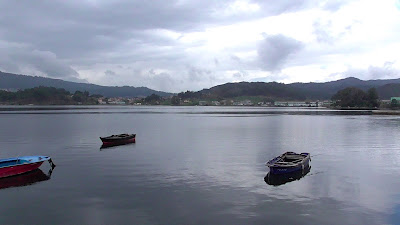 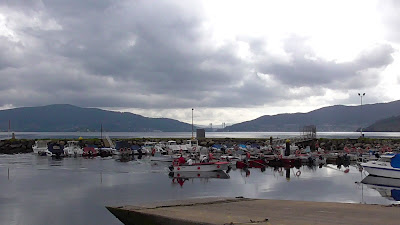