The wild Atlantic - love it!

We’re still at the campsite in the village of Aios.  We slept well and it was good not to have to pack up and leave after one night.  I think some of my tiredness has come from researching and planning the next stop each night, then getting the van ready to go, followed by a drive to the next place.  Now we’ve find a lovely place to stop, we’re enjoying the relaxation, especially given our lovely view out to sea.  The bread man came in his small white van this morning with a large variety of freshly baked bread.  It’s rained on and off today, but we managed to get out for a beach walk in the afternoon, just getting back as the rain started again, but at least the wind has reduced.  From the van we’ve also watched dolphins swimming by and playing in the breaking waves.  We’ve made the most of being on electric hook-up to get everything charged up and used the Remoska for cooking dinner.  I’ve completed the monthly accounts and topped up the CaxtonFX card, which I mainly use for withdrawing cash; a Halifax Clarity card is used for the rest as they use the more beneficial international banking exchange rate of the day.  Tonight we may watch a movie or part of a series (stored on a Passport HDD) on the MacBook.  Or we may just stare out and watch the waves crash on the sure just 30 metres away.

It’s been a much brighter and sunnier day, but the Atlantic wind’s been relentless.  I’ve been at sea in the south Atlantic - clear blue skies and blinding sunshine give the impression of good weather, yet the sea has been wild and stormy, throwing us about as we drop and twist through the deep swell, the wind whipping the top off the waves.  It’s like that today.  So it’s not a day to sit outside the van, but from the relative peace and quiet inside the view is spectacular.  The day started cloudy with some rain but it soon cleared away.  The bread man was an hour late today, but no matter, we still enjoyed our breakfast.  The two vans either side of us (both British) left today, so we wished them bon voyage and now there’s just us here.  Today I was on a mission. I need to replenish victuals, most importantly teabags!  So with rucksack on back, I cycled out of the site, climbing steeply, puffing hard and wishing I hadn’t eaten so much of that delicious bread!  Cathy was going to square away the van and then spend some time down on the beach, cleaning it of some of the micro-plastics washing up with each wave - every little helps.  I followed the coastal road out, up and down the hills, eventually reaching Sanxenxo.  Originally a small fishing harbour, the fish market still exists but it’s now a thriving tourist town with its own sandy beach and bay.  Although surrounding areas haven’t yet surfaced for the new season, Sanxexno was bustling, with many of the shops, cafes and restaurants open.  I managed to end up cycling along the seafront the wrong way down a one-way road, but nobody seemed to mind.  Cutting up through the town along steep roads, I eventually found a Lidl, where I spent an enjoyable half an hour or so filling a basket - it doesn’t take much to please me these days. With just a rucksack I only bought the essentials.  Back on the road, I tackled the hills and strong headwind to return to the site and pack away the purchases.  Shortly later Cathy returned from the beach with a bag of rubbish, although battered and beaten by the wind, which was now strengthening into the afternoon.  The rest of the day was spent doing some hand washing, which blew and dried well on the line, and sat inside reading.  The cab seats were best - in full sun - so warm, but out of the wind.  Dinner was some chicken wings I bought in Lidl, spiced up and roasted in ‘Oska’, with vegetable and egg fried rice.  I washed up outside, with the campsite dog for company (sorry, no tidbits!), as Cathy wan’t feeling well so went to lie down.  Some of our washing was dry (even the campsite owner was saying it’s ‘too windy’) and the rest came in later, aired on the van dashboard in the sun.  A brew, a bit of TV series watching on the MacBook & HDD and an early night I think.  Tomorrow, we’re moving on….I suspect we’ll have some more wild weather before we turn the corner and starting heading east along the northern Spanish coastline. 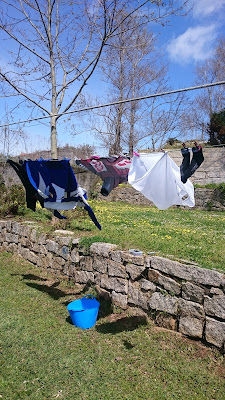