I've got to drive up there!?

A bit of an unusual day, with six hours of mountain road driving. We left Entragu, stopping off briefly at the next village to empty the loo.  Our plan was to drive to a lovely looking aire in the mountain village of Posada de Valdeon, deep in the Picos de Europa national park.  The road soon started to rise, but it was a wide, smooth road….until we came to the landslide.  It looked like half the mountain had come down on the road and into the river, very scary indeed if you’d been near it.  There was a restaurant just either side of the slip; they were very lucky.  A security guard pulled us over and indicated we had to wait to take a diversion road that had been built across and alongside the river.  I was in two minds whether to turn around, but he didn’t seem phased by the size of our van and after about 10 minutes, when traffic coming the other way had passed through, we were waved on.  The diversion dropped steeply to cross a makeshift bridge over the river, then we followed a rough track for about 200 metres before again crossing the river.  The track then turned into a very steep, hard-left hairpin bend and I knew I wouldn’t make it in one go - the turning circle on the van isn’t great.  So I had to stop, reverse slightly (there were no barriers between this makeshift road and the ravine) and hill-start to get around.  The van’s rear heavy and front-wheel drive so the traction wasn’t great, but eventually we gripped and managed to make it out!  On the reverse we heard a bang and thought we’d hit something, so once at the top, we found a pull-over to check - luckily no damage was seen; I think I may have just flicked up a small rock.

After this the roads became much narrower and started to climb steeply up the mountainside, with lots of hairpins.  We were soon into and above the snow line, with large drifts along the road.  I was starting to get a little concerned as we continued to climb.  In many places the barriers were small or non-existent, with nothing between the edge of the road and an almost vertical drop many hundreds of metres down to the torrential river.  I’m not great with heights, so the combination of narrow roads and no barriers was not good for my blood pressure!  Luckily the traffic was light so I was able to drive further into the middle of the road for much of the drive.  We eventually topped out at Puerto de Tarna, 1490 metres above sea level.  We stopped for a breather - and for me to attempt to lower my heart rate!  The journey down the other side was just as ‘interesting’, with a large number of hairpins, but at least it was downhill which was easier.  We finally made it to the aire at Posada de Valdeon and parked up.  I plugged in electric and we enjoyed a welcome brew.  It’s in a lovely spot, surrounded by rocky mountain peaks and high pasture.  They had the usual rules about not putting out chairs, which was a real shame, considering each pitch was separated by wooden fences.  We had a walk around the village with the intention of eating out but, for some reason, we didn’t have a nice feeling about the place.  It’s a lovely, well-kept village but it just didn’t feel welcoming.  You know that bit in the Chitty Chitty Bang Bang film, where they walk into the courtyard of the Baron’s castle - nobody’s to be seen but they know they’re being watched, with shutters and doors closing.  If felt like that!  So, despite the long journey and great views, we both decided to move on.

The journey out was similar in parts to the one in, but the last 30km were along a narrow road at the bottom of the ravine, with rocks overhanging the road in some areas.  Despite the winding narrow roads and lack of forward visibility, many cars still overtook us on blind bends, causing us and the traffic on the opposite side to brake sharply.  If only I’d been able to fit those missile launchers to Nido’s roof!  Our stop for the night was at a parking area just outside the town of Santillana del Mer.  We parked up, changed and walked down the hill into the village.  Declared a national monument in 1899, Santillana has preserved its lovely ancient stone buildings and cobbled streets so well, it looks artificial.  It has embraced the tourist trade, so is overflowing with grockle shops selling tourist tat and local produce.  We popped into one restaurant intending to eat and ordered a bottle of the local cider, which is placed in a contraption you have to pump, which then pours the cider from height  through a thin spout into the glass in order to add oxygen - it’s a messy job!  The menu wasn’t great though, so we drank up and moved on.  We found another place across the way and ate in there instead.  On the way back to the van it started to rain, so we dropped into bed, tired but no longer hungry.  What a day! 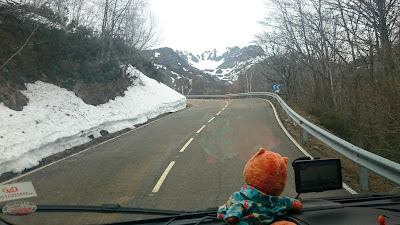 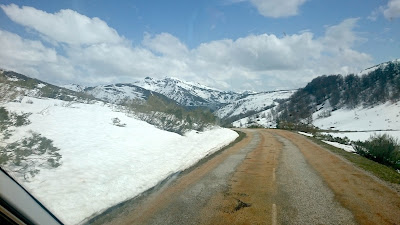 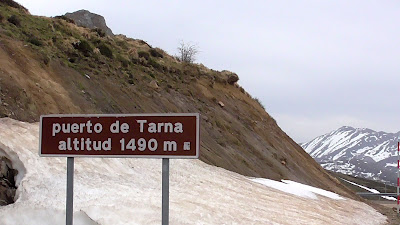 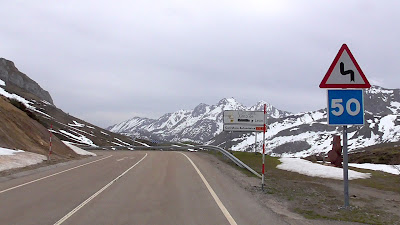 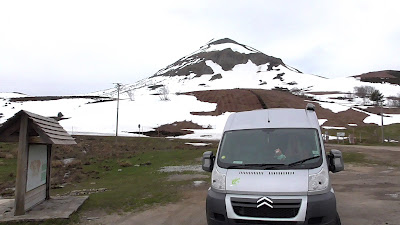 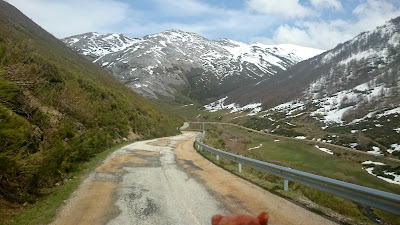 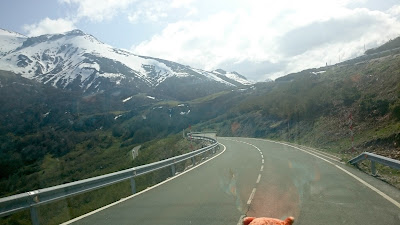 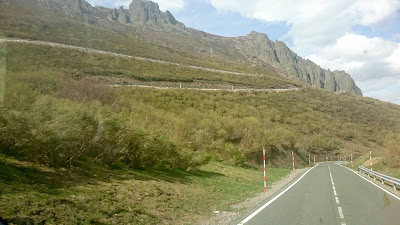 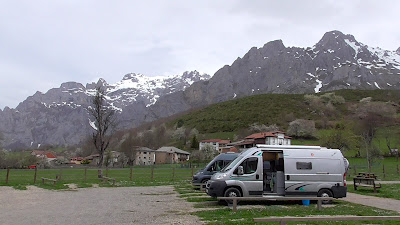