We’ve spent some time trapped today!  The experience of being woken early by a stall-holder wanting his pitch was actually quite funny - I leapt out of bed (and luckily remembered to get dressed!), opening the sliding door to see we were completely hemmed in by market stalls, with our stall-holder expectantly and politely asking us to move!  We’d heard some noise a couple of hours earlier but thought it was workmen; it was actually other stall holders hammering iron pegs into the tarmac!  Luckily there was some room further up behind another motorhome so I quickly moved us out of the way; I could then seen the other vans had also had to move and were also squashed up together, stuck for the day.  There was no sign on the aires board here, or in any of the books, to suggest today was market day.  It had started to rain by then, but I popped back and offered my apologies to the stall-holder - smiles all round. I looked for a way too drive through but it was clear we were going nowhere until the market packs up.

In our new pitch we had a cup of tea and woke up.  Later (during a gap in the rain), I popped out for a walk around.  The nearest stall to us was a food stall (more about that later).  There were a couple of butchers, a couple of stalls selling bacalao, cheeses and preserved sausages, plus a couple of fruit and veg stalls.  The remainder were mainly clothes, kitchenware and wooden products, plus one selling live chickens.  I walked down to the Padaria to buy some bread and cakes and had a quick espresso while out of the rain (which had started again).  This town is built on several levels on the steep valley side.  Despite the rain it looks a nice place and on a warm sunny day, we’d no doubt explore and try and find a walk.

Back across the road to the market, I popped over to the stall whose pitch we’d been on - again smiles all around.  I bought a small round of goat’s cheese to give something back.  It was then time to queue for breakfast!  I’d been looking forward to piri piri chicken for our whole time in Portugal, but thought my chance had slipped away. Here it was being cooked over large half-drums of charcoal, slowly turned on a flat spit and regularly basted.  I joined the queue of people buying hot, spatchcocked chicken to take home.  There were long tables and benches under cover, where locals sat to eat, drink and catch up.  With my hot chicken and chips in a bag, I stopped for a cup of wine, swapping a hello and smile with the old chaps; not a word was understood between us but that didn’t matter.  Back at the van, we tucked into our unusual breakfast!

The market started to pack up around midday, which allowed us to make our escape.  The route out was interesting, including creeping past a section of road that had partially collapsed down the hill and with a steep and slippery hill start on wet cobbles at traffic lights, with an immediate sharp right turn into a very narrow lane with high buildings on either side - there was just enough room for us but a larger motorhome would not have made it. The journey was a wet one, with a quick stop for diesel, before we arrived at this aire in Furadouro, on the edge of the village, with dunes between us and the beach.  It’s supposed to be a popular fishing and surfing spot, but, like the other van occupants here, we’re huddled inside out of the torrential rain. I think we’re now set for the night.

The rainy confinement has allowed me to take a slower and longer look at our route through Portugal and into northern Spain.   I’m feeling much happier after a rubbish day yesterday. Perhaps getting blocked in at the market was a sign to slow down and smell the…….BBQ piri piri chicken!  I think the weather over the past few days hasn’t helped, with days of wind and then heavy rain confining us to the inside of our small van.  Cathy summarised it well on our drive here, when she said that out of the six weeks we’ve been away, we’ve sat outside the van less than ten times.  I hope it’ll improve sometime soon, although the forecast back home on Anglesey for the next week is looking better than northern Portugal and Spain!

A few kind people have sent me details of places to visit or stay in northern Spain and I'm really grateful to them, as it's always good to have a recommendation from someone who's been there before.  Thanks GlorYa and Roaming Man! 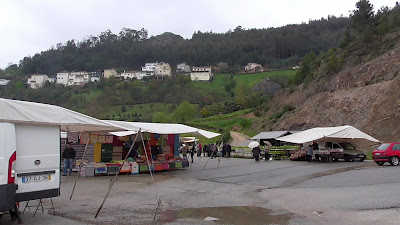 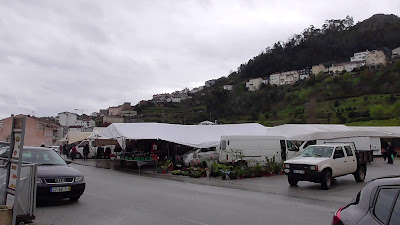