End of the earth at the Coast of Death

We’re parked up in an aire overlooking the fishing harbour and sea in Fisterre.  The owner is a very friendly chap, who gave us a useful pamphlet of the town and area, plus the wifi code.  It’s only €5 for the night; for another €3 we could hook up to electric, but we’re all juiced up after the last 3 nights.  The drive here was lovely.  The coastal road follows the deep inlets and estuaries and we enjoyed the journey, including climbing over and down some steep hills. The area is a bit of a mix of Cornwall, Scotland and Norway in terms of scenery, certainly an area we’d probably return to.

The aire’s right in the small town of Fisterra with narrow streets, old fishermen’s cottages, hostels for the pilgrims to stay in and lots of fish restaurants.  After a brew we walked into town and followed the Camino signposts, walking the last 3km to the Faro de Fisterra. The headland with its lighthouse (plus grockle shops, bar and hotel) marks the end of the Camino trail - we felt a bit of a fraud walking the last little bit, but massive respect to those who have walked the whole Pilgrim’s Way.

Fisterra is known as the end of the ‘Coast of Death’ (due to all the shipwrecks along this coast), it’s naming coming from the Latin - finis terrae - meaning end of the land.  Many pilgrims finish their walk at Santiago de Compostela, but some decide to continue walking to Fisterra, to reach the end of the land and the start of the sea.  It adds another 84.5km to their journey and is signposted with granite stones with the yellow scallop symbol.  In the past, those pilgrims who reached Fisterra burned their clothes in a symbolic and traditional act of purification and the starting of a new life.  The whole Camino is a tough walk and I have a great deal of respect for those that complete it.  They’re helped on the way by cheap places to stay (a bit like youth hostels) and many of the cafes and restaurants provide a reduced-price ‘menu del dia’ for the Pilgrims.

We spent a little time looking out to sea from the headland, before reversing our route and returning to the aire, stopping off for some groceries at the Coviran supermercado.  Dinner tonight was a hotchpotch of ribeye steak, fried mushrooms and….baked beans!   It’s just what we fancied and it went down well, preceded by a couple of empanadas (the local small pasties) and a brew, then followed by a small cake and another brew - not exactly healthy but we enjoyed it. 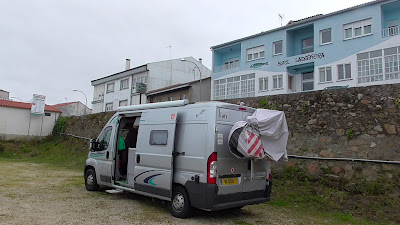 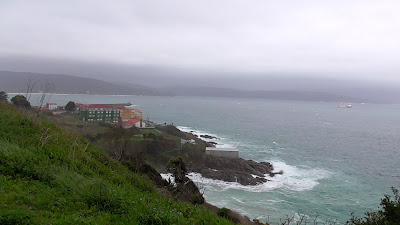 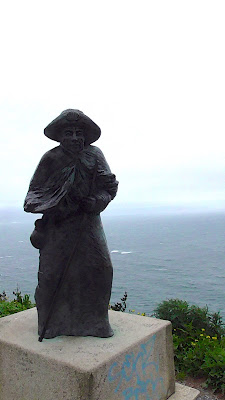