Nido’s parked up at an aire in the tiny village of Saint Antoine, just inside the Languedoc region.  It’s been a hot, sunny afternoon - a day to enjoy.  I walked into town this morning to buy some croissants and a baguette.  The town was just coming to life and the fair was starting to set up in the large car park adjacent to the bull ring, ready for the May Day weekend fete.  It was a typical sight in a typical French town.  Goodies bought, I wandered over the road for a coffee in one of the bars.  We enjoyed those croissants - our first in France this trip.  We said our goodbyes to Sandie, who was planning on staying a few more days to work on her book.  She was suffering from a very painful back she thinks due to a few long drives.  Hopefully she’ll recover quickly and there’s always an outside chance we’ll bump into her and Rosie again!

I made the schoolboy error of not checking the longitude setting on the satnav, so plugged in West rather than East!  I only realised when we started to turn towards the west coast; after pulling over and setting it right, our journey time increased by 2 hours! Lesson learned, particularly when on or close to the Greenwich meridian.  The drive took us through Armagnac country, with many small ‘domaines’ advertising tasting and purchase direct from them.  We passed through a number of small but lovely ‘Village Fleurie’, including a stop off by a lake for a cuppa and leg stretch.  It was hot by then so we changed into shorts.  A couple of other vans were parked there and one had a dog who clearly wasn’t getting enough attention from his owners!  He bought his tennis ball over to me for a game of throw and fetch, until he got too hot and flopped back into the shade of his own van.

We arrived at Saint Antoine and were the only ones on this aire, overlooking countryside.  We went for a wander around the village, which took no time at all as it’s tiny.  It was a staging post (and still is) for the Camino de Santiago de Compostela and the village used to provide shelter and food to the pilgrims.  The books still mentions a cafe, shop and restaurant in the village, but they’re all closed now.  But the history of the village was plain to see, with large gateways, towers and the church.  After walking around we followed the pilgrim path out of the village for a couple of kilometres, towards the next hamlet of Saint Cirice, which was even smaller than this one.  But it was very peaceful, the sun was shining and the birds were singing.

Back at the van Cathy made a lovely tuna salad and we sat outside under the awning to eat, finishing with a charentais melon we bought in Aire sur l’Adour.  It’s not yet the season for charentais (this one was from Morocco) but when the local ones are ready in late summer, they are the best, perfuming the whole van until we eat them over a bowl to catch the juice.  We were able to sit out until way past sunset; although a little chilly the sky was clear and the birds kept us company.  A little later a French van turned up, but there’s still only the two of us on this lovely, quiet aire in the middle of the countryside.  Tomorrow we don’t plan to travel far, as there’s quite a few aires around these parts and it looks like there’s some nice walks to be enjoyed. 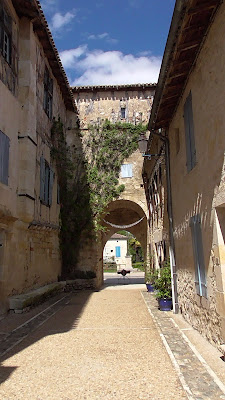