Relaxed by the River Adour

Well, we woke to….you guessed it….rain!  We were chatting to a couple parked next to us last night, who’d been away for just a couple of weeks.  They said the weather in France had been so good that they stayed on Ile de Re for five days and were enjoying the sunshine of Biarritz.  I bet they’re cursing the Jacksons turning up, towing the rain cloud behind them!  We had planned on spending another day on the coast, but instead decided to use the rain as an excuse to get some dhobying done.  I found an outside laundromat at a Carrefour supermarket, but the machines were quite dirty and it didn’t accept either of my cards.  So I found another about 700m away, this time a proper laundromat with a ‘lady that does’ inside, who does the service washes and ironing.  We were able to park right outside, albeit tight against a wall and Cathy went in to load up, while I researched some places to visit and stay on our way up through France.  By now it was close to lunch time and the small Thai takeaway next door was open and seemed to be doing good trade - sorted!  So while Cathy transferred our dhobying to the drier, I ordered us a chicken Panang curry and a pork pad thai.  Ten minutes later with the washing all dried and folded, we were tucking into a delicious Thai lunch, parked in a corner by a laundromat - that’s van life!

With the beach day abandoned, our next stop was a 2.5 hour drive and we eventually arrived at the aire in Aire Sur L’Adour (so good they named it twice!).  Cathy was in bed with a headache and bad back, so she didn’t see me do a double take as I drove in - there was Sandie Dunn’s van!  We met Sandie and her dog Rosie at Mikki’s Place in Portugal.  I wrote about seeing her book advertised on the back of her van, downloading it and laughing out loud - it was a great read.  I think she was as surprised to see me; there are over 3,000 aires in France, sometimes several within just a few square miles, so the chance of meeting up like this again are pretty slim.  We had a quick catch up over a brew before Cathy and I went for a wander along the path by the river Adour.  It’s a wide and fairly fast flowing river and a few fishermen (and women) were out, as well as several frogs (I mean of the waterborne kind!) making a lot of noise in the reeds.  We enjoyed a lovely walk along the river and a path that took us past fields and through a wooded copse.  With the sun shining and birds singing, we started to feel ourselves again.

Back at the van, we met up with Sandie again for a longer chat, sat outside the van.  We provided the coffee and she provided the Sambuca to splash into it.  We’ve been off the booze for a while, so this was a rare treat.  We caught up on where we’d been since we left Mikki’s Place and future plans.  Like us, she’s a Francophile but, unlike us, speaks fluent French - I’m going to improve mine.  Rosie enjoyed one of the dog treats we keep in the van for special visitors, gently taking it from my hand.  Rosie’s deaf and her sight isn’t good either, so she’s a bit wary when arriving somewhere knew, so hopefully this put her at ease.  Once we lost the sun Sandie and Rosie returned to their van. Sandie’s working on her second book - she’s up to 39,000 words so far and works on it every day.  We’ll look forward to reading it.  If you want to read her very good and funny first book, you can find it on Amazon here: We sat inside the van with a brew, reading and watching the sky change colour as the sun set.  The forecast for the next few days isn’t great, but we have some lovely areas to visit and great aires to stay on, including a couple of recommendations from Sandie.  So we’re feeling much more relaxed and looking forward to our month in France. 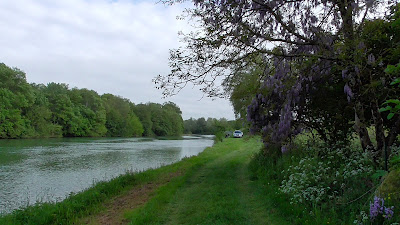 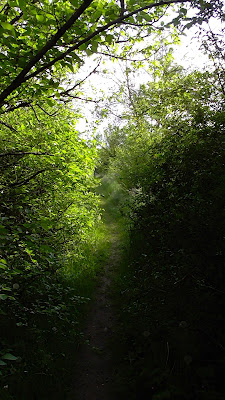