When we went to bed last night it was hot and stifling, so much so that we swapped around in the bed so our heads were close to the window, better to catch any breeze.  But in the early hours the wind really got up and I'd made that schoolboy error of assuming the weather would stay calm, so left the awning in place.  So at 0115 there we were, half dressed and outside the van, lifting pegs and winding in the awning!  Then it was thundering and lightning, with a few drops of rain, so skylights were dropped and washing brought in - an unexpected awakening!  But the storm came to nothing, except to cool down the air and we slept well after that.

It was fresher and cooler in the morning, relatively speaking.  Probably still in the mid-20s at dawn, it felt much nicer than the stifling heat of yesterday.  I got up at about 0915 and was just thinking of getting the kettle on when I heard a horn tooting - we both guessed right and shouted out "the bread van!".  Of course I was the one who had to quickly dress, grab some money and walk to the entrance, rubbing the sleep from my eyes.  A baguette and two croissants later, we sat outside with a pot of tea and coffee, enjoying our breakfast in the fresh(er) air.

I prepared my cycling kit while Cathy sat out and read her book.  She was planning to do the van (house) work and always likes me out of the way - who am I to argue.  I turned left out of the campsite and followed the coastal road north.  The whole eastern coastline comprises mud flats and muddy creeks, with lots of little, rundown shacks selling oysters, mussels and other seafood.  Each of these looked a little like Steptoe's Yard but, in the breezy sunshine and wind beaten, they all had their own charm.   The cycling was flat and easy with the wind, no when heading west into the prevailing breeze.  I by-passed Boyardville, with a view of the Boyard Fort (like those in the Solent) and started to cycle inland.  I started to pass the vineyards; Oleron make their own white and rosé wine and there were several wooden shacks selling this, plus pineau and cognac.  I was strong and cycled by, although we may pop in when passing in the van tomorrow.  Oleron is very much a timeless, blue-collar island, unlike it's posh neighbour across the water.  In contrast to Ile de Ré, the people go about their business as they always have, tolerating the tourists (like us!), who flock here in July and August.  It reminded me a little of the swamps and bayou of the southern USA, a little edgy but safe, with a slow pace of life little changed over the years.  Even the small, single engine planes flying over seemed to resent trying too hard to stay aloft, their 'lawnmower' engines idling and coughing.  Now inland I circled and entered St Pierre a couple of times (nothing special) before heading for the west coast.  I reached Cotiniere, a village with a busy fishing port and quite touristy.  I headed out along the campsite-strewn road, looking for an aire or somewhere to stay, but it was a bit busy for us.  The western coast faces the Atlantic and so the wind was stronger and saltier, with a high surf.  I cycled down the coast and turned toward Plage Boisvert, stopping off for a cold coke down at what seemed to be a surfing Mecca.  Back on the road I crossed the island again towards Le Chateau and the colourful oyster shacks, now mainly trendy shops, bars and restaurants - we'll be down there tonight.

Back at the campsite, I checked the computer - nearly 34 miles, not bad and I still felt good.  I locked up the bike and walked down to the beach to get the van keys from Cathy.  The tide was still out but she was enjoying the warmth and peace in the shade of the sand-side pine trees.  Back at the van I made a flask of tea, packed some food and walked back to the beach.  We enjoyed a late lunch by which time the tide had raced in.  We moved down to the sand and walked to the water.  It was very warm and loads of fish were swimming and jumping around us.  We soaked up the mineral-rich water for a good half an hour, enjoying the warmth of the sea, before drying off on our beach chairs.  A couple of hours later we were back at the van, sorting out, showering and enjoying a Pineau apéro before walking down to the port.  We found a nice, trendy restaurant and sat outside in the sun.  The menu was small and in French (of course!) so Cathy guessed for her meal and I took the safe route of steak.  We also had a pichet of the local white wine, very fresh, light and with a bit of fizz, not unlike Portugese Vino Verde.  Our food arrived and Cathy's was razor clams - something she's not keen on!  Luckily I love them and was happy to swap my steak - the staff looked a little confused!  Cathy had a taster of six different puddings, all delicious, while I had a Charentais (cognac) coffee.  Well fed, we walked back in the fading light, taking a few more photos of the colourful shacks.  Back at the van it had cooled down and was comfortable inside as we flopped  into bed.

It's been a relaxing day, I really enjoyed my bike ride, while Cathy enjoyed her beach time, albeit wearing her beach shoes to avoid the muddy seabed!  Tomorrow we move on to a different part of the island.  We have an idea of where we want to stay but want to check the beach first; if it isn't deep blue water with sand, we'll find somewhere else, perhaps even off the island.  All part of the adventure and freedom of having the campervan.  Á demain! 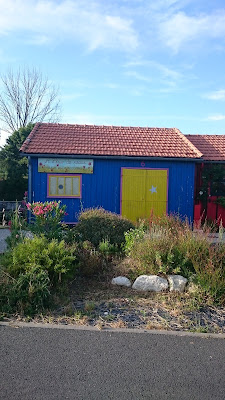 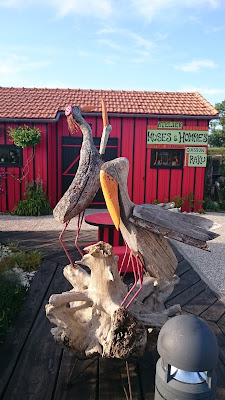 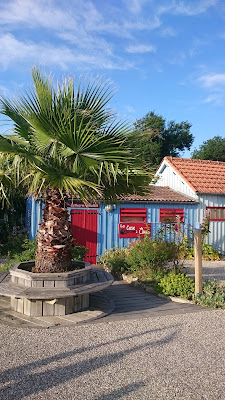 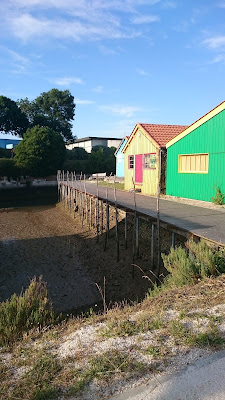 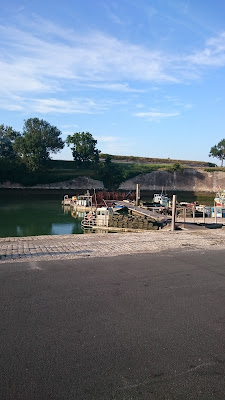 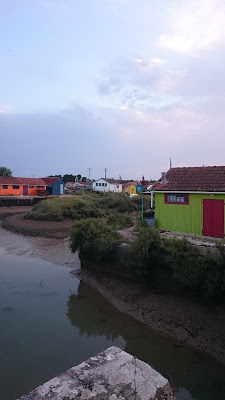 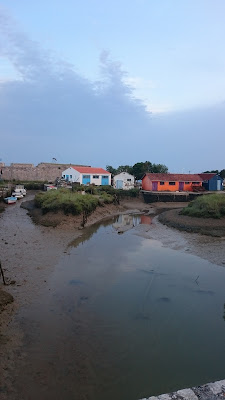 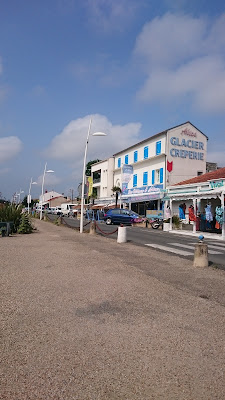