We're on an aire in Thouars, a typical small medieval town in middle Poitou, with a monastery, several churches, castle walls and tiny streets.  It sounded good in the guide book, whereas I think it's been hit hard by the credit crunch, with lots of empty shops and closed down bars.  The aire is at the foot of the town walls and has 8 very narrow pitches - there are six vans on it, with three others spread around the car park.  But I don't think the local council will complain, they really need the tourist income!

We both slept well and I was awake at about 0800.  I walked the short distance to the Boulangerie for two baguettes and two croissants.  We had breakfast outside, then packed up ready to leave.  According to our book, this aire was €9 per night plus €4 for water, and that someone would come and collect this.  Well, nobody came.  We didn't need any more water, although I did empty the toilet cassette, but what does that cost?  So it was another free night.  I punched in the coordinates for the Le Clerc to fill up with diesel.  It was a hypermarket, so we popped in to buy some more water, a stool and a dress for Cathy.  We hit the road and finally left Ile d'Oleron after a great week of sun and sea.  Our route took us North, through Rochefort and Niort.  I'd set the Satnav to,get us to the Tour de France route on Friday, so the plan was to drive for about 3 hours then find somewhere to spend the night.  At about 1230 we pulled in to a picnic site for lunch and sat outside at a large wooden table to enjoy our lunch.  However, we saw a few men pull up in cars, mooch about and the disappear into the bushes -  another strange French lunchtime occupation!

Lunch done we headed for Thouars, about an hour away, but pulled off on the way at Airvault, which looked like it had an interesting town centre; it also had a free aire.  We parked at the aire them walked into town.  It had some small, medieval streets, but was quiet and rather run down, so we decided not to stay.  But we took the opportunity to empty grey waste and top up the fresh.  Back in the road we continued to Thouras, doing a circuit of the narrow, one way streets before finding the aire.  I manoeuvred into the end pitch so we had room to open the sliding door and sit outside, with jasmine and honeysuckle for our little garden.  After a brew we walked into the town.  It took us a while to find anything interesting.  We eventually made our way down to the river, where we came across over 80 'jardins famlieux' (allotments) leading down to the water's edge.  Each was unique but lovely, with veg and flower beds, most with a little 'tacky shack' down near the water.  We walked up into the town and I found the Tourist Office.  They could do little but offer me a map!  We were looking for a bar to quench our thirst but found not one open in this large town!  So one baguette purchase later, we were back at the van for a beer apéro, sat on the car park bench like a couple of winos!  Dinner was bacon, onion and garlic omelette, with a bottle of rosé, eaten in our little courtyard garden just outside the van.  Washing up done, showered and after a brew, we're ready for sleep.

As I finish typing I can hear the swallows calling and flying overhead around the castle ramparts surrounding us (one of my favourite sounds in France), something which probably hasn't changed for hundreds of years.  Tomorrow we continue our journey north.  We'll look to stay somewhere about 3 hours away, which will leave us a short journey on Thursday to find our pitch to watch the Tour on my birthday - can't wait! 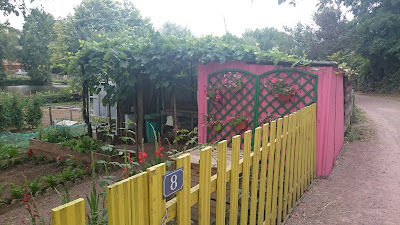 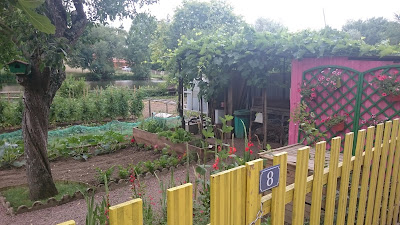