We're parked on a grass area at the junction on the D926 and D26 at a place called La Tête au Loups.  It's at a great spot for tomorrow's Tour stage from Livarot to Fougères.  It's at the top of a hill and at a junction so we'll have a great view of the caravan, cars and riders.  When we arrived there were about 3 motorhomes, now there are about 15 - all nationalities, mostly French, some Belgian, one German (who keeps eyeing up the Battle Ensign flying from my flagpole!) and a couple of Brits. It's 2030, there's still loads of bright sunshine and we're well fed and watered.  I've been for a ride along the tour route, the Tour will pass within 6 feet of me tomorrow and it'll be my birthday - perfect.  The only thing missing is my wingman Ray - he'd love this.

We slept well last night on our quiet rural aire and woke to blue skies, so we enjoyed breakfast in the sun.  Packed up, I drove over to the service point.  It said in the book I needed a token, but all the water was on so we were able to empty and fill up for free.  So we've learnt now to check them on arrival - if it's free we can wash clothes and have a long shower.  On the route up we stopped at an Intermarché for food and drink.  Cathy was very impressed with the outside laundry - two machines and a large dryer.  The plan was to navigate to a point on the tour route and then follow it up until we found a place to stop - which we did and it's perfect.  On the way we past the many fields of sunflowers - beautiful.

On arrival we had a spot of lunch then I prepared my bike and kit to cycle part of the Stage 7 route.  I left the pitch and cycled up the route (in reverse).  The first few hundred metres were downhill then there was a long, 2 mile climb up to the village of Exmes.  The bunting was up and they were clearly looking forward to tomorrow.  After that it was a series of hills, along narrow roads and through woods - could make for an interesting stage tomorrow.  I turned left onto the D26 and continued through Omméel and into Chambois.  I stopped here to look at a memorial; it's one of ten of what's known as the Circuit of August 1944, key points in the battle to retake France.  Another 6km on - and all uphill! - was the Mémorial de Montmerel.  This key point is where the Polish and American forces met, having closed the circle on the retreating Germans.  During the ensuing battle over the next month 50,000 Germans escaped, 10,000 were killed and 40,000 injured.  I took some time to reflect then started the route back, this time following the yellow arrows of the route.

Back at the van I topped up with water, had a brew then showered before we had dinner.  Cathy prepared the salad and I fried some onions and cooked the sausages for our hot dogs.  We sat in bright sunshine at 1930 eating a good dinner with a glass of rosé, watching other vans arrive.  Clearly some of them are Tour Groupies, as they already had a collection of the yellow direction arrows on their dashboard and windows - I need to get me one of them!  We're enjoying the evening now, finishing our wine, chatting to our French neighbours and also the one British couple here. Cathy said she can't believe she's enjoying sitting by the side of a busy road so much and wants to follow the tour when we retire - result!  Tomorrow is going to be a good day - the forecast is hot sunshine and we have the excitement of the Tour to look forward to.  It doesn't get much better than this! 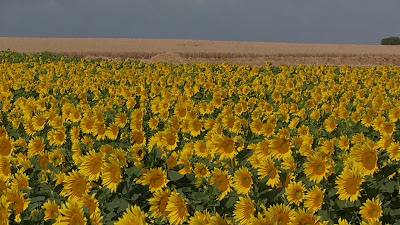 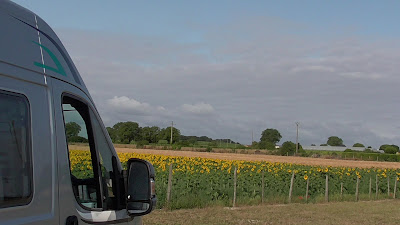 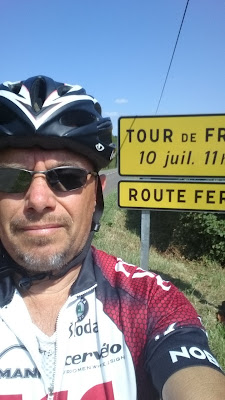