We're on a lovely free aire near at Etang de la Fonderie, near Jublains in the departément of Mayenne. This is a rural peaceful spot, next to a boating, swimming and fishing lake. The pitches are mainly on grass, the pitch areas broken up by tall hedgerows.  There's room for about 50 vans, but there are only 3 of us here at the moment.

We were woken early at Thouars by the bin men at about 0500 and the builders, working on rebuilding the city walls at about 0630.  It started grey but was clear blue sky as we set off.  Breakfasted, waste dumped and topped up with fresh water, we continued our journey north.  The clouds built and it turned windy, with the temperature struggling to hit 18'C, chilly after the last week or so of 25-30'C, but still OK to stay in shorts.   We stopped off at an Intermarché to buy some lunch - whole cooked prawns and bread, plus dinner - duck breast, haricot beans and carrots.  The journey was mainly on flat roads, the first half cheered up by fields of tournesols (sunflowers) and vines, with mainly family run Domaines along the route, the second half was mainly wheat and cattle farms.

We arrived at the aire at about 1245, found a pitch on the grass and sheltered from the wind and sat outside for lunch.  We had a walk around the lake which had a couple of quieter, wilder areas.  Back at the van I grabbed my fishing tackle and with my limited bait (cheese and bacon!) spent a couple of hours drowning it - not a single bite!  Cathy had a snooze and when I returned to the van I did similar - a welcome, lazy afternoon.  We enjoyed a brew sat outside, then I prepared dinner: first the carrots were cut in half lengthways, marinated in salt, pepper and olive oil, and set to cook in the roasting tray on the Cadac BBQ.  After a few turns and the lid on, the duck breasts were added, skin down to allow it to crisp and the fat to escape, the turned and lid on to replicate a few minutes in a hot oven.  In the meantime the haricot beans were flashed boiled, then drained and I added a knob of butter, garlic and lemon juice.  Whilst this cooked we had a G&T apéro, sat outside.  It was a delicious dinner, enjoyed with a bottle of Samur sparkling wine and in isolation, as we had the whole 55 pitch aire to ourselves! We washed up outside then had a walk into the barley fields to catch the last of the sunlight, before returning to the van for some hot chocolate.  With a relatively short drive it's been a lazy day today, just chilling out, relaxing and sleeping (oh - and eating good food!).

Tomorrow we have a short 1.5 hour hop to Argentan, which is on the Tour Stage 7 route.  From there I'll drive up the route towards Livarot, to find a suitable spot to park up for the night, ready for the great Tour de France spectacle on Friday.  Until then, the complete silence here is making my ears ring, plus with no light pollution we should sleep well.  For the first time since we left Normandy we've put the quilt back on the bed.  Let's hope tomorrow brings more sunshine. 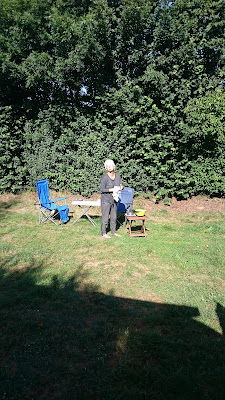