Time for a bit of information about Ile d'Oleron.  The island lies just off the coast between Royan and La Rochelle and has, since 1966, been linked to the mainland by a long, curving road bridge, the longest in France at almost 2 miles.  Except for Corsica, it's France's biggest island - 18 miles long and 3.6 miles wide.  The white houses of Oleron are surrounded by mimosa, oleander, tamarisk, fig trees and the grey-green spines of agave.  Everywhere hollyhocks spring up through seemingly tiny gaps between the concreted ground and walls.  Oysters are its main crop, along with some early fruit and vegetables and the cultivation of vines.  The vineyards, mainly grouped inland around St Pierre and St Georges, produce white and rosé wines with an agreeable, slightly iodised flavour.

Some naval related history:  The Rules of Oleron - in 1199, the 76 year old Eleanor of Aquitaine returned to her island possession.  She set about restoring law and order.  The dangerous Côte Sauvage, for instance, had long been at the mercy of wreckers who looted and pillaged ships driven ashore and robbed any survivors from their crews - a practice euphemistically known as le droit d'aubaine (windfall rights).  Eleanor decreed that henceforth such brigands must be punished: "They must be put in the sea and plunged under water repeatedly until they are half dead, and then taken out and stoned to death as one would dispose of wolves or mad dogs".  Subsequently she set up a set of rules "concerning the seas, the vessels sailing upon them, their masters, crew companions and also merchants".  This maritime code, known as Les Rôles d'Oleron", served as a basis for all subsequent charters regulating conduct on the high seas (such as the International Law of the Sea, which I came to know well).  The island was occupied by the Germans in 1940 and liberated on 30 April and 1 May 1945, though not without difficulty.  Overcoming the stubborn resistance of the 15,000-string garrison and forcing a German surrender required a large-scale combined operation, which was code named Jupiter.

Now on with today's travels.  The wind blew up again in the night and it rained quite heavily on and off; I had to get up again to batten down the hatches (shut the skylights!) but the morning was calm and warm, still with some high cloud.   I was awake quite early so got up, dressed and made a pot of coffee while waiting for the bread van to toot its horn.  Soon enough he arrived and I wondered over to join the queue of old boys sent out by their wives to buy the bread (life as an old chap is hard).  He'd already sold out of croissants, so I bought two bavettes, one for breakfast and one for later.  It was hot sat outside and we enjoyed our breakfast saying 'Bonjour' to our neighbours as they walked by and acknowledging the occasional "Bon Appetit!".   Soon it was time to pack and and secure the van.  With waste dumped and the water container topped up, Cathy punched in the code and we drove down to the Super U to buy some food, water and local wine.  I then drove us back past the aire and north along the coastal road I cycled yesterday.  We stopped off at a roadside shack to buy some local salt, before checking out the aire at Boyardville.  It looked nice - grass pitches with plenty of pine trees for shade, but a little too close to the road and not close enough to the beach.  So we continued on to St Denis.  We stayed on the aire here for a couple of nights when we first came to France in a motorhome two years ago.  But we wanted to check the beach to make sure it's sandy before deciding.  On the way down to the town we saw the municipal campsite, right next to the beach.  Although large (400 pitches) it also looked welcoming, with plenty of room between pitches and shade from pine and tamarisk trees.  We parked up and walked down to the marina.  On the way back I got some cash from the ATM and by then we'd already decided to use the municipal site.  I checked us in for four nights and we found a lovely pitch; quite flat, right next to a sandy path to the beach and by all the facilities.  It's south facing, protected from the prevailing wind and, although in direct sun, has a small tamarisk tree with plenty of shade for two chairs.  As we're here for a while we 'made camp', putting out the groundsheet, fitting the external silver screens over the windscreen and cab windows and fetching tables and chairs out.  We also rolled out and secured the awning.  We had some lunch sat outside, again enjoying the friendliness of the French - they really do know how to relax and make the most of a peaceful spot.  We took the path to the beach and within 30 seconds were on the sand.  The tide was coming back in and we could tell it would be a great swimming beach, a bit rough and windy but lovely clear, cool water. After a walk along and back we walked around the site to get our bearings, after I let reception know we were on pitch 72.  There are plenty of facilities on site, including a good shop, bars and a small restaurant.  And we're only a few minutes' walk from the centre of town.  The next few days are going to be very relaxing.

We spent the rest of the afternoon reading and snoozing in the shade of the tamarisk tree before hitting the beach, now almost at high tide.  So just 30 seconds away the warm sand welcomed us and the tide was in.  It was quite breezy so felt a bit cooler on the beach, but all is relative - still a lot warmer than an afternoon at home!  After a read it was time for a swim.  The waves were high and the water was cooler than we've been used to, but we were soon in, battling the swell and the tide, plus the seaweed wrapping itself around our legs and body!  Swim done, Cathy laid out to dry off while I walked along the beach up to the WW2 gun emplacement and back.  It was quite cool in the wind so we walked back to the van, to shelter and warm sun.  A brew later, Cathy showered in the van, while I walked to the shower block - straight in, warm and powerful.  I also dhobied my swimming shorts, pockets full of small stones and seaweed.  Back at the van, Cathy had made the salad while I grilled the lamb chops on the Cadac, enjoyed under the awning with some bread and rosé for Cathy (called Les Tourettes!), local red for me.  As we ate we watched a nice little chap (maybe 3 or 4) kick his inflatable ball around then ride on his pedal-less bike.  He was not happy if anyone touched his ball and even less happy when called in for his tea, nevertheless he got stuck in to his food.  The last time we saw him he looked fit to drop, but was heading out with his family to the small funfair between the campsite and the town.  Cathy sorted the washing up while I went to ditch the gash; I walked nearly twice around the campsite before realising that what I thought was a shower block was actually the gash compartment!

It's a bit chillier tonight, still OK for shorts and flip-flops but with a fleece.  Still we sat outside with a brew and a biscuit.  Cathy's just gone off to take some sunset photos at the beach.  It's been a good day, a short commute from one site to the next, a lovely pitch right next to the beach and with shade if we need it.  We both feel very chilled out.  I look forward to another bike ride tomorrow and no doubt Cathy will enjoy reading, snoozing and sunbathing.  Lovely, chilled out, relaxing, warm, sunny day.  We're also turning a nice shade of brown - sunshine, not muck! 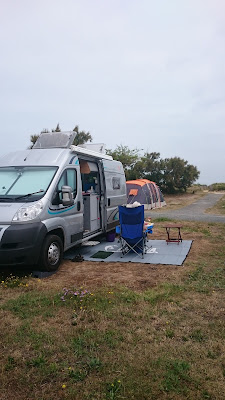