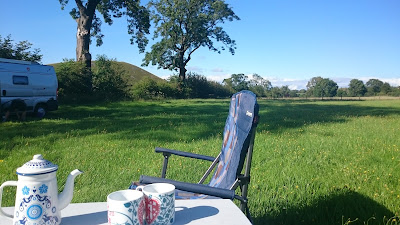 We spent last weekend on a CL at Angram Green, just outside the village of Worston, near Clitheroe, Lancashire.  The CL is in a large field so even if the 5 pitches were taken, there would still be plenty of room for everyone to enjoy some peace.  Although basic (bins, fresh water and chemical disposal point), at £7 per night and with lovely views, we enjoyed our two nights.  Although I'd thought of not renewing our Caravan Club membership, with half-price M6 'Troll' road fees and some great CLs (which save for posh facilities and bars/restaurants offer the same as more expensive campsites), I reckon we've had value for money already.

Friday 24 July 2015
After a day at work, we drove up to the storage site to collect Nido, filled up with fresh water and headed north on the M6 - I say headed, actually we crawled along covering jsut a few miles in an hour! I also forgot to put the water filler cap back on, as I discovered on arrival at the CL, but luckily the storage owner found it and it was finally reunited with Nido on Sunday evening. I also wanted to fill up the LPG tanks.  We'd been away for two weeks in France and a weekend since last filling up, so I was interested to see how much we had used.  I (after two failed attempts!) finally found a garage that had access to LPG and was pleased to see it took under 10 litres (at 55.9p per litre) which equates to just over one 6kg bottle used, so we still had plenty in reserve.

Due to the traffic we were about an hour late, but the CL owner met us on arrival (I think they could see us approaching from their farm).  He let me know we had the field all to ourselves so could pitch anywhere.  He also apologised for the grass being so long and pointed out areas down by the trees that were more level and not so long, but Cathy liked it as the grass and clover attracted lots of bees! We pitched up and had a quick brew, watching the remains of the sunset, before enjoying our dinner of hot dogs, onions and salad (all prepared by Cathy that morning) - plus a glass of red.  After a long day and now nearly dark, we settled down for a sleep in the peace and quiet - my ears were ringing from the silence. The only sounds were the odd owl and some strange thumping sounds - perhaps the Pendle Witches doing circuits on their broomsticks!?  If you're interested in the history behind the Pendle Witch trials, you can read more here.

Saturday 25 July 2015
We woke to clear blue skies and warm sunshine after quite a chilly night.  Breakfast was cooked and enjoyed outside and Cathy sorted our picnic ready for a walk.  I'd downloaded a 10 mile walk and we headed off at about 1030.  The first section took us along the bottom of Pendle Hill and then climbing (via some lovely old stone barns, both of which were occupied by sheep and one by an old wooden horse cart) up the moor to come out on the road opposite the Pendle Ski Slope and next door was a bar and restaurant - The Wellsprings Inn - which specialises in Spanish and Mexican food; the views from their outside tables and car park over the valley looking toward Clitheroe were amazing. On the walk up to the Nick of Pendle, para-gliders flew above us, having thrown themselves off the top of Pendle Hill and a professional road cycling team passed us, supported by a couple of team cars - I was attempted to run alongside them shouting "Allez, Allez, Allez" but suspect firstly that they would think I was mad and secondly I would be out of puff before the first "Allez" was out!

We walked down the hill into Pendleton and sat on a bench by the beck to enjoy half of our picnic, saving the rest for later. Onwards, we walked into Worston and stopped at the Calf's Head for a quick pint, good timing as it rained for about half an hour before the sun reappeared.  Heading out toward Downham, we were met by Billy the horse and his minder.  We were munching apples as we walked and Billy took 'great' interest in these - Cathy cracked and donated hers!  As we approached Downham we could hear a band playing (brass or silver, no idea which) at what looked like a village fete.  We sat on a bench by the beck and enjoyed the rest of our picnic, with a brew and cake.  As we ate the cake we saw Billy and minder walking along the road on the other side of the Beck - luckily he didn't spot us or the cake, although his chance of Cathy donating any of that was zero!  A couple of Americans were also taking a keen interest on the bench we were sat on, even taking some photos of it as we sat there! When we checked out the plaque on the backrest we saw it was donated by someone from the Mormons. A quick Google search found that a Mormon leader - Richard Douglass - was born in Downham in 1828, emigrating to Utah in 1852.  Picnic done, we completed the final section of the walk along the base of Pendle Hill, back to the campsite.  We sat in the sunshine resting our legs and enjoying a brew, followed not long after by a G&T apero!  Dinner was a kind of chicken paella/rice thingy, all cooked in one pot for ease and eaten outside in the setting sun.  With the washing up done, it was starting to get a bit chilly in the breeze, so we moved into the van and played a word game (I think I won!) before heading off to bed.

Sunday 26 July 2015
We had a lie in and opened the van to high cloud and a breeze, but at least the forecast rain hadn't arrived - yet.  We again had breakfast outside, albeit wearing a jumper and just finished washing up when the rain started.  So we packed everything up, emptied waste and drove off, heading for the coast at Southport in an attempt to extend the weekend.  Unfortunately the weather worsened and this really didn't help Southport, which I doubt would have looked any better in bright, hot sunshine - what a dismal place!  We saw a sign for a beach car park and pulled into a small, grubby area, full of large, water-filled pot holes and the 'beach' nowhere in sight.  A German motorhome was parked up with no sign of the occupants.  How they must be regretting their decision to holiday in England!  On the way out we passed the Pontins Holiday Camp - it's the height of the season but it looked empty and the 'chalets' reminded us of the condemned naval housing at Rowner - grim.  We won't be returning to Southport.  Nido back in storage, we were soon back home, enjoying a shop-bought pizza with some salad and wine, watching 'Place in the Sun' to plan future long-term trips as the rain lashed down outside.  Still, we had a good Saturday and enjoyed our weekend away. 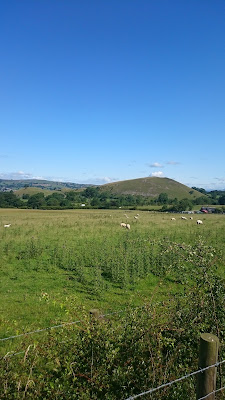 Email ThisBlogThis!Share to TwitterShare to FacebookShare to Pinterest
Labels: lancashire