We were suffering Nido withdrawal symptoms after our two weeks in France, plus we wanted to get out of the rut of mooching around at weekends.  So we've decided, during the summer months at least, to get away as often as possible.  Clearly this could be expensive if staying on campsites, so Britstops and CLs will keep the cost down.  We also want to keep our drive to between 1 - 1.5 hours, especially if we don't leave until early evening on a Friday.  With this in mind I looked for a CL close to home with some nice country walks and booked this CL, in Haughton close to the village of Bunbury, about 30 minutes drive down the A49.  This is a typical 5-pitch CL but also has a self-catering apartment, so they have their own website.

Friday 17 July 2015
Cathy had already collected Nido from storage, so when I reached home it was just a matter of quickly changing and hitting the road.  The journey was fine (for a Friday!) and we arrived at the CL at about 1800.  The owner was away but the CL was being looked after by a friend, who was very welcoming, and we had a choice of three pitches, the other two already taken by caravans.  All pitches are grass, but on well-drained sandy soil.  In fact it rained hard over Saturday night but the next morning the ground, although damp, wasn't waterlogged at all.  We hooked up and decided to walk up to the local pub - The Nag's Head - just a few minutes away.  We both enjoyed a pint of 'Cheshire Cat' ale sat outside in the sunshine.  The menu looked pretty good and, sadly, we missed 'chippy tea Friday' by half an hour, but I'd already planned our dinner.  Back at the van I made some beefburgers, cooked on the Cadac with a cheese topping, with toasted muffins and a salad.  We were soon nodding off so headed to bed early.

Saturday 18 July 2015
We slept really well and after breakfast, made some sandwiches and a flask and headed out for an 8 mile walk.  It was mainly through fields with lots of stiles - and lots of 'Bovins' - aka cows!  And they were quite aggressive, they didn't attack us but they did run over en-masse (and 50 cows running towards you is scary!) and had to be waved away.  Back home Cathy did some research online and there were lots of reports about cows starting to become quite aggressive, much of the evidence pointing towards steroids and hormone intake (not that they have a choice!) and early (36 months) slaughter, so there are no matriarchs to teach the others that us humans aren't a threat.  Mind you, we did follow one group of walkers into a field who let their black labrador run free - crazy.  We adapted the walk to initially head away from Bunbury so we could walk some of the Shropshire canal.  Bunbury was a nice village with an interesting church dating back to the 14th Century - St Boniface - extremely large for such a small village and with a very welcoming feel.  It included the tomb of Sir George Beeston who in his time was Admiral of the Fleet and commanded HMS DREADNOUGHT during the Spanish Armada battle at the age of 88 - he lived to the grand old age of 102.  Our return route (through Bovin-infested fields!) took us back past the Nag's Head, so we sank another pint in the sunshine to recuperate and recover!  Back at the van I prepared dinner - a sort of paella with vegetables, chorizo and bacon, cooked in Oska.  For apero we had a G&T with some small eats of the last of our French roast chicken rillette on toast.  Tired again quite early on, we were soon nodding off.

Sunday 19 July 2015
It rained quite hard in the night but we woke to clear skies, although still quite windy.  Breakfasted and with all waste dumped, we drove off to the National Trust property at Erdigg, just inside Wales. There was clear coach & motorhome parking so we stopped there.  Some past visitors had thrown rubbish on the car park - Lambrini and lemonade bottles everywhere, not only litter louts but with no taste either!  Cathy did her 'glitterati' gig by bagging it all up and taking it into reception, which earned her a free guide in thanks.  We had a good wander around the gardens and also the house.  We always seem to enjoy the servant's areas and quarters rather than 'upstairs' - we know our place!  We had a quick cup of tea then decided to eat in their restaurant to save cooking when we get home.  We dropped off Nido at his storage home and came back in Cathy's car.

Next weekend maybe we'll go a bit further with the aim of finding some more challenging walking - perhaps with a few hills but hopefully fewer grumpy cows! 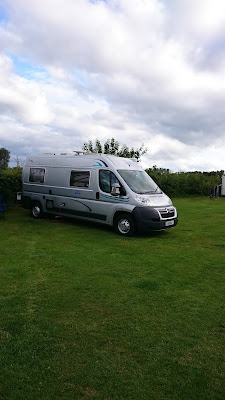 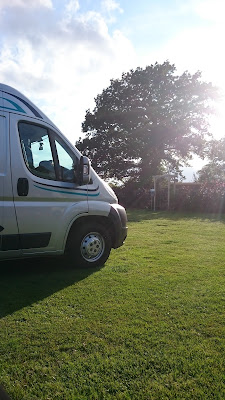