Apparently there was rain and heavy thunder overnight - well, I didn't hear it!  It was pleasantly cool though, so we both slept well.  Breakfast done, we had a long walk along the beach as the tide receded, mooching around in the rock pools.  We walked back across the slipway by the harbour and found a nice spot for our afternoon swim.

Back from the beach, we walked into town.  The daily market was coming to and end; Cathy bought a dress and we bought something tacky for the TS.  All this walking and shopping is thirsty work, so we stopped off at the site's resto/bar, for a cheeky bottle of Grim or two, Grimeniere, a strong blonde abbey beer.  Back at the van (and Cathy a little 'tired' from the strong beer!) we cobbled some lunch together, then snoozed and read until the tide was far enough in to make it time to head for the beach. Although the morning was a little overcast, this afternoon was hot and sunny (again!), albeit with a strong westerly breeze.  After a restorative brew, we walked over to our beach stop, where a couple of the concrete blocks (shaped like the metal jacks we played with as kids) had conveniently fallen into bench seat shapes.  We enjoyed our swim and a dry off in the sun, although it felt a little cool in the wind.  Back at the van and having showered first, I sat with a Ricard and water listening to podcasts while Cathy was off at the shower.  We have neighbours now - nan, grandad and a bullying, overweight, teenage grand-daughter; I bet her parents were glad to wave her off!  She's done nothing but nag and shout at her grand-parents. They've been setting up camp for several hours, including sandbags and plastic wine barrels full of sand around the tent and caravan awning - either they're here for weeks or expecting a hurricane!  Camp also includes a long windbreak to mark their territory.  And just along the way a group of about 30 teenagers have turned up with 'redcoats' for some sort of summer camp.  We've noticed over the last 24 hours that it's become much busier here and guess that the school's have broken up for the summer - time to move on.  Having said that, we've enjoyed our stay on this municipal campsite and being around families and others.  It's certainly something we'll do again.

After our apéro we walked a few minutes to La Guinegelle, the site's resto/bar and blagged an outside table, although a little too close to the young chap playing his accordion to taped music, mainly out of sync! We ordered two local beers, although Cathy didn't like hers so I had two.  We both ordered pizza and they were big enough to fill us too much for pudding. Back at the van, it's quite chilly outside (although it's all  relative - probably still warmer than home) so Cathy's in bed reading and I'm sat in the cab seat with a hot chocolate.  Tomorrow we move on, so will need to strike camp, pack everything away and dump waste.  But the plan is for a short hop to the aire at La Cotiniére, about 20 minutes down the coast, for one more night on the island.  Then we'll be starting our transit North (nooooooo!!), heading inland towards Livarot, aiming to find a spot to camp along the Stage 7 Tour de France route on Friday.  Still, we have another 7 nights in France so we plan to keep on enjoying ourselves.  We're certainly relaxed and in a nice routine.  We'd be happy to keep going for several more weeks.....one day. 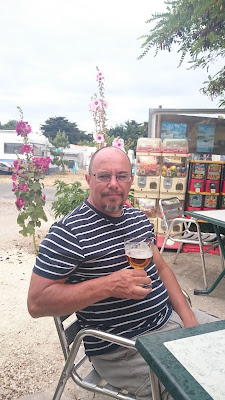 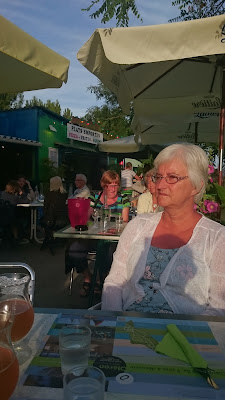