We're at a large aire at Le Chateau on Ile d'Oleron.  It's gone 2200 and we're still sat outside in the very warm, still air.  The temperature hit a max of 38'C today and did we feel it!  When stepping out of the van it was like someone had opened an oven door, fanned by a hot breeze.  This aire is an ex-campsite, about 100 pitches, all with electric hook up, plus toilets, showers and fresh water, and all included in the price of €10.50.  It would cost about 3 times that much in the UK for a similar site, with the beach just across the road.  The aire's less than half full, mainly elderly French, all as brown as berries, eating well and having a good time - and good for them!

We woke at about 0900 this morning and after breakfast packed up the van and pulled up at the service point to empty waste and take on fresh water.  I'd paid €2 for water but the station wasn't working - what a rip off!  So I used the grey waste to flush the toilet cassette and we headed off - today's drive was a long 5 hours, but it would get us to where we plan to spend the next week. We stopped off at a Super U for food, wine and diesel then hit the road.  The journey wasn't too bad, just long and hot.  We stopped of on the way for lunch, enjoyed sat at a concrete picnic table in the shade, just off the busy road - it was better than it sounds!

On arrival at Oleron we realised with the heat that we'd need more water so I stopped off on the way to pick some up.  We arrived at the aire and this time my credit card was accepted for 2 nights; the last time we visited here none of my cards were accepted and we ended up at a different aire, but it was still a good find.  First stop was for a fresh water top up.  I had a banging headache, dehydration I think, so kept the fluid intake going.  We took a pitch quite close to the showers.  I hooked up the electric and when I checked found the polarity (live & electric) were reversed. Luckily I have a special plug in adaptor to correct this so Cathy put the kettle on while I set up the awning, we were going to need it.  Despite the heat, a good cup of tea always hits the spot!  We wasted no time in crossing the road to the beach.  It's a thin stretch of sand and, as we found out, a shallow and very muddy sea!  This whole stretch is where the majority of the oyster beds are located.  So the swim wasn't great but it was very cooling.  Cathy had a read while I went for a walk to the end of the beach and back, up to an old Napoeonic fort.

Back at the van we had a cold drink then enjoyed the solar-heated showers, although it was still very hot out, so we were still leaking after the shower!  I prepared a Greek salad, which we had with pork kebabs, sausage and some carrot salad, plus a couple of glasses of rosé.  It's cooled down quite a lot now but I think it'll be very warm in the van tonight, so sleeping might be a challenge.  But at least we're chilling out and enjoying making camp for a couple of nights.  We'll probably move on in a couple of days, do some sightseeing on the island and then find another site for a few nights, to take us through the weekend.  But the plans can wait for another day...... 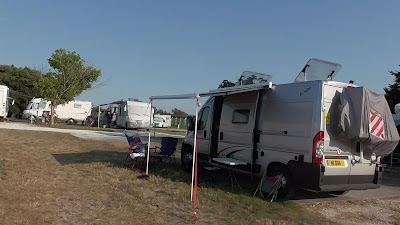