It's been a cracking day - my birthday spent with the lady I love, watching the Tour de France - a perfect day!

By the time we went to bed last night there were about 30 vans on our patch - a good mix and all friendly.  I woke up this morning and went out to ditch the gash before anyone woke up.  I also tried to nick one of the Tour arrows for the Tacky Shack, but it was tied on with wire!  I had coffee and half a baguette sat outside while Cathy showered and changed, watching the Tour preps and not quite believing I had slept and was 'living' not 10 ft from the route!  It was a great atmosphere as time went on and more people arrived.  A bit later on a guy called Mark came over and asked if we were on holiday.  We got chatting and he'd lived in France for 14 years but was originally from Leigh Park near Havant and had lived in Gosport - small world!  He'd met and married a French lady and had two daughters who spoke mainly French now.  His French was good and we chatted about immersing yourself in the language.  He was particularly useful when some  completely mad French woman tried to grab everyone's stuff thrown out by the caravan, giving her a good telling off!

After the caravan it was over two hours before the riders came through - a small breakaway a few minutes ahead of the peloton - fast and furious then been and gone!  For the couple of minutes they they cycled through I didn't spot any famous riders.  We said our goodbyes to Mark - nice guy - then had some lunch before packing up.  I said 'Au Revoir' to our French neighbours and gave the boys my TDF magazine - hopefully it'll improve their English!  Packed up and ready to move, I dialled in our next stop - an aire right on the coast at Veulettes-sur-Mer.  It was about a 3 hour drive, but the satnav didn't factor in the ferry crossing over the Seine at Bac de Quillebeuf.  We'd been here before, travelling in the other direction and panicking that the satnav was playing up!  But this time we knew what to expect.

We arrived at about 1830, paid up, had a quick visit to the very stony beach, then washed and changed for dinner.  We walked past a little shack doing basic brochette, frîtes and beer - how I wish we had stayed there!  We stopped at a bistro next to the beach which was pretty full with locals -usually a good sign. We had a beer and ordered our food - calamares, then steak for C and Moules frîtes for me.  The calamari was clearly frozen and the tartare sauce tasteless - we told them so and waited for our mains.  Cathy's 'medium rare' steak was burnt to a crisp and like old shoe leather.  My Moules were full of sand.  The worst meal ever in France.  We complained and I only paid just over half of the bill - just shows how they rip off the tourists in Northern France.  We walked back to the van and enjoyed the last of the light before retiring to the warm, cozy interior of the van.

So ends another Birthday.  A lovely day spent with Cathy watching the Tour.  Hopefully in three years time we'll be planning our first long trip in retirement - still, three years is a long time ....... watch this space. 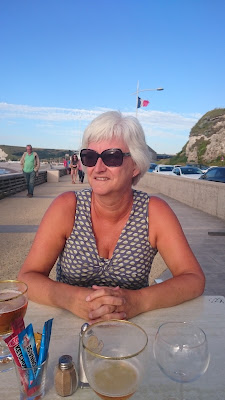