Catching up with an old friend in Burgundy

We survived our first night on an aire and slept until 0700 - late for us.  The bin men arrived at about 0500 to empty the wheelie bins and made plenty of noise, but we drifted off again.  I went out at about 0730 for our breakfast croissants and lunchtime baguette.  The aire didn't say where to buy the Jeton, so I asked at the Tabac.  He directed me to the small supermarket on the corner next to the aire (called The Casino!).  I used this to plug into electricity to charge up the iPad and also to provide water for topping up our tank, soaking myself and the can next door in the process!  After breakfast and with all tanks refilled and emptied, we patiently waited for the commune gang to place flower troughs on the windowsills above us with a cherry picker.  After a friendly wave we pulled off and headed into Epernay to fuel up, before plugging in the satnav coordinates for our next stop - Vandanesse en Auxois, about 40 minutes south east of Dijon, where we planned to meet up with Jacqui & Andy.

Soon after leaving Epernay we were deep into champagne country - lots of family owned companies - most of which appeared to be Father & Daughter(s).  We passed a very strange building, with half a car embedded half way up the building wall, a deep sea fishing trawler and an executive jet on a stick!  The country roads were lovely and quiet and when they become even more 'tumbleweed-like' we realised all the locals had headed home for lunch. So we pulled over on the side of the road, next to a sunny hillside of vines, for our usual lunch of baguette, pâté, rillette and salad, with a brew of course!

Heading off again we topped the hill to look down on Lac de Panthier, a large freshwater lake with an ACSI campsite if we couldn't anywhere in the village to park.  Audenesse village spans the Canal de Bourgogne and, luckily for us the 'port' (a boat berthing area next to the bridge and lock) had a large parking area in which 3 motorhomes were already resting - it appears to be an unofficial aire.  We parked up between two to 'bags' our pitch.  We had a slight list to starboard but decided we could live with that.  We walked the 100m to the bridge, crossed the road and met with Jacqui at her Salon de The.  It was lovely to have a fresh brew sat in their tea room garden. Another English couple came along and sat with us.  They keep a boat on the canal (more like the sort of floating gin palace you see on the sea!) and were several weeks into their trip.  They last visited the tea room 4 years ago, but remembered the lovely, homemade cakes.  This they enjoyed with a pichet of cold rose - I could hear the cogs turning in Cathy's head - cake & wine, a winning combination!  We arranged with Jacqui to head back to their house - which is what used to be the village store and next to the tea room- at about 1900 and want for a stroll along the canal.  Heading back we crossed the bridge and a car pulled up alongside - it was Andy just back from work in Dijon. A quick chat and wave and we headed back to the motorhome for a sit in the sun and to get ready for tonight.  One of the vans had left so we moved into their vacant and level space.

Andy and I were in the Royal Navy together, both Writers who were later promoted to officer.  Although we never served together, our paths crossed a few times. On the last occasion he and his family had just returned from a tour in Naples, they had already moved to France and Andy was seeing out his final few months working in the Fleet HQ in Portsmouth, where I also worked.  He came over for dinner one evening and we swapped addresses, never thinking we'd meet.  When I realised we'd be heading close to their house I got in touch and we were kindly invited to stay for dinner.  I asked if they wanted anything from Blighty and the only thing was crunchy peanut butter!  I'd also bought a bottle of champagne so took that along too, the 3 minute walk from motorhome to house didn't warm it too much! 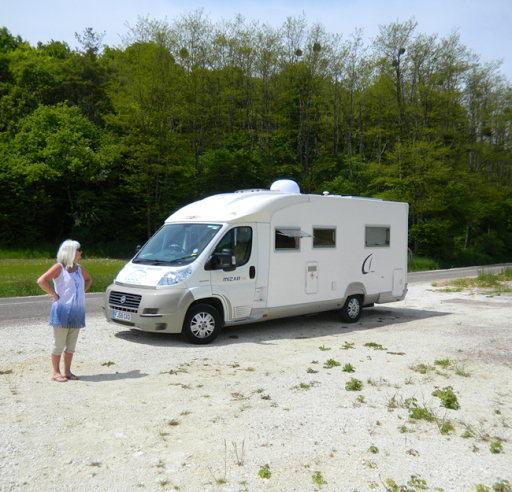 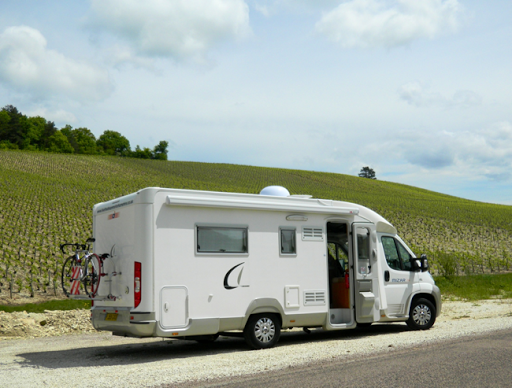 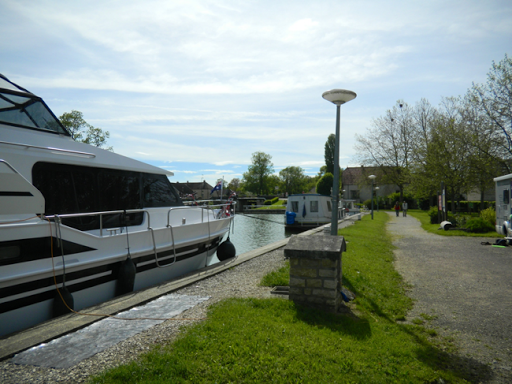