We're still parked in the Aire at Vallon Pont d'Arc.  I popped into town this morning to buy our baguettes and the weekly market was on, so I also bought some oranges, apricots and a kilo of local cherries.  Today we planned to achieve Cathy's dream of wild swimming in a river.  We have a great book called Wild Swimming in France, which has hundreds of locations to choose from, including lat/long, parking area and directions to walk to them.

Today was easy as I had already recced the route yesterday when out on my bike.  We packed our bags and picnic and headed off down the road that follows the Gorge.  It's a 3 mile walk along a fairly busy road  and two tunnels through the rocks.  Along the river there are loads of campsites, snack bars and canoe or kayak hire companies.  We eventually reached the sign for the Plage de Pont d'Arc and dropped down to the water's edge, very close to the arch.  It was early so only one other person was there, the water was flat calm, the sky clear blue and it was very quiet - bliss!  We unpacked and went for a paddle - it felt chilly, but no worse than a warm day in the Solent.  So we eventually braved a full dip.  There was quite a current flowing right to left but close in it was quite safe.  We spent some time swimming, sunbathing, reading and watching the kayaks work their way down the river.

After lunch we decided to move to the beach on the other side of the arch.  This was busier, but there was still plenty of room and loads of soft sand and shade under the trees.  We had a snooze which was lovely.  I'm feeling the effects of hay fever at the moment so just had a chill out, but Cathy went for another swim and sat at the water's edge soaking up the view.  It's always been her dream to enjoy more wild swimming and so today was a special day for her.

We started the hot walk back and, on reaching the Aire, she went off to open up the van, sort out and shower and I headed into town.  I wanted to buy a Jeton token to top up water tomorrow but the tourist office was already shut (it was gone 6pm).  I bought a few things for tonight then decided I'd earned a beer, so sat in the square with a small but very refreshing Kronenbourg for 15 minutes of 'me' time.  Back at the van all was sorted, washing done and hanging to dry in the hot sunshine.  After a shower I prepared dinner then we sat out with a Pastis and chatted about the day.  I BBQ'd the Toulouse sausages, which we had with an onion & tomato salad.  As always, we were the only ones sat out in the warm evening air - everyone else was in their van watching TV - what's WRONG with them!  We're now all washed up, cleared away and ready to sleep after a hot but very relaxing day.

We're ready to move on now after a relaxing day with no driving. Tomorrow will be a shorter transit as we startbto head west. We hope to get  in some more wild swimming before deciding where to stay. It may be another day or two before we have wifi access to update the blog, but we're in no hurry.  We're well into holiday mode now.

Random thought of the day.  There were quite a few dogs around the gorge.  I noticed (as you do) that all the male dogs were 'intact', unlike most British male dogs that are done at an early stage.  I wondered if this is a French thing? Maybe the average French man thinks this is too much, even for a dog! 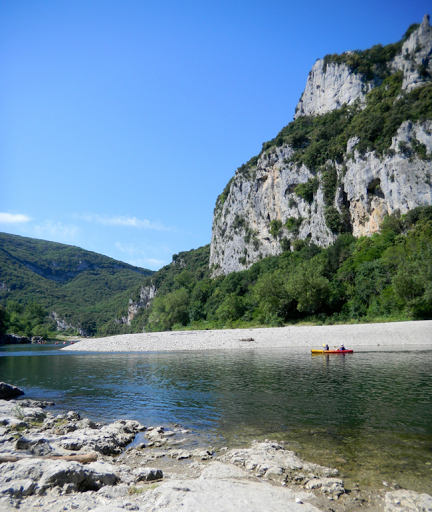 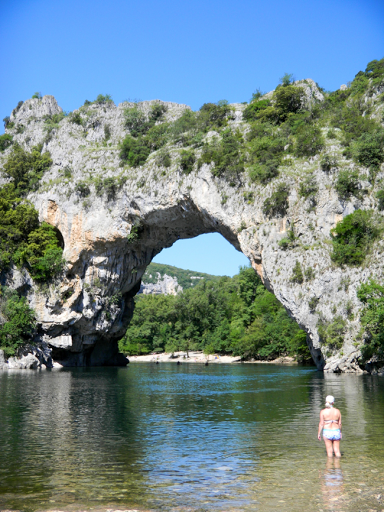 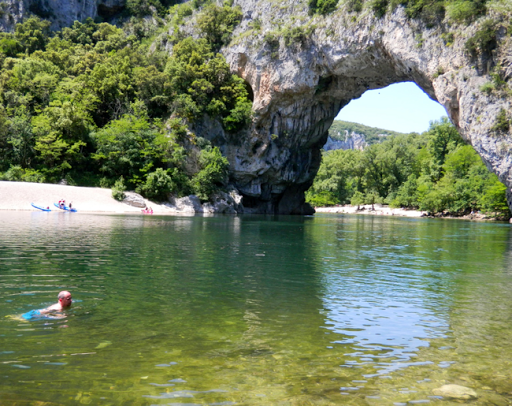 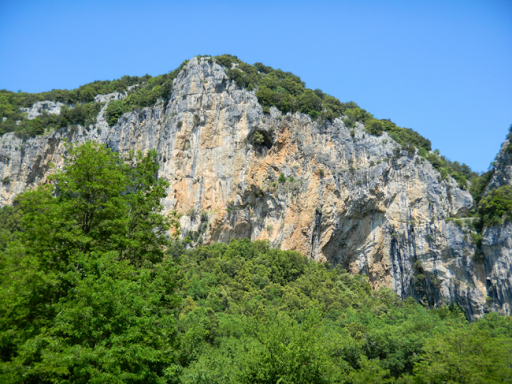