We're parked in an Aire in Calais, next to the ferry port. We need to be here to be up early tomorrow morning to drop fluids and catch the 0720 tunnel to Folkestone arriving at 0655 BST.
We enjoyed the peace and quiet of last night's Aire and had a lazy morning (for us).  The cold water yodel alarm (Cathy shrieking in the shower!) alerted me to a problem - no hot water.  I checked and changed the fuse but that didn't make any difference.  I also checked we still had gas.  We were also quite low on water so I thought perhaps this was a safety feature to prevent the heating element burning out.  But after topping up with water we still had no hot.  Oh well, at least Cathy had her (cold) shower and hair wash.  It's a submariner's dhoby for me until we get home. We had an omelette for breakfast with some of our emergency baguette stored in the freezer, plus a brew.  After a bit of a tidy up we sat outside in the sunshine, mainly to let Cathy's hair dry so she could take advantage of the electricity to burn her hair straight.  Electric disconnected and everything secured, we moved over to the service point to drop waste and top up with fresh water.  There was no thread on the tap so we had our first try at topping up with the collapsible water container and funnel.  It worked fine albeit it a little slow - Cathy managed it well on her own though - I would have soaked my t-shirt and shorts in the process.

We punched in the coordinates for an Aire by the sea and headed off through the countryside.  "That Woman" seemed to be behaving herself today, although some of the roads were a little on the narrow side - I was particularly unnerved when a large HGV overtook me at speed on a narrow, winding country road - as if my driving confidence isn't shot through already :-(

We arrived at Le Crotoy at about 1230 - lunchtime.  The Aire was already busy.  It says it can take up to 50 vans, but I think there were far more than that there, although it doesn't seem too crowded.  We're parked on a sandy but hard surface with a view over the estuary from the port windows.  We took a walk along the harbour wall and stopped off at a restaurant for a lovely seafood lunch, watching the market stall holders pack up from their morning's trading.  We walked back to the van to sit and chill in the sun before heading off for our final couple of hours driving in France, heading for Calais.

We've just had a text from Chris saying he's passed the final test of his Army basic training - a full week out on exercise putting into practice all he's learned in the past 13 weeks - known as Exercise "Final Fling". This is marvellous news and of course we're hugely proud of him. But, more importantly, we're pleased for him.  He's had to overcome some major obstacles to get to this point, some would say from the very bottom of the gutter. That he's achieved this is testament to the grit, determination, courage and bloody self-mindedness that we always knew he had, but he hadn't yet tapped into.  Only one in 30 potential recruits make it to this point, so it's a massive achievement. We'll be very proud to attend his passing out parade at Pirbright next Friday, before he moves on to the next phase of training with his chosen regiment - the 9th/12th Lancers.  I think this Dad, perhaps like others, will have some grit in his eye next week, making them a bit runny!

Leaving Le Crotoy we drove the 2 hours to the Aire in Calais, including our one and only section of toll motorway - for about 5 miles at the princely sum of €1.60 - what's the point? This Aire is a little like those wild places you see in The Waterworld film, or perhaps The Land That Time Forgot! All nationalities, but mostly Brits, and mostly looking like they've been sat outside the front of their van drinking all day.  Or perhaps they've been parked here for a fortnight, slowly turning brown on the outside and pickled on the inside!  This Aire is a definite cul-de-sac, yet at least 10 French cars a minute drive down, gawp at everyone, turn around and drive off. We sat out for a while outside then went for a walk along the sandy beach.  We had a meal inside the van and are now clearing up, ready for our trip back to the Grim North in the morning. See you on the other side...... 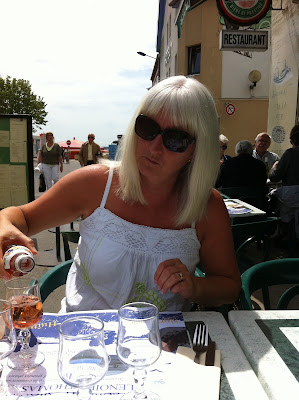 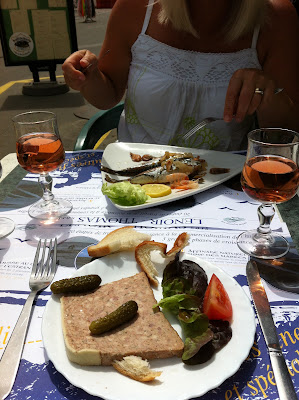 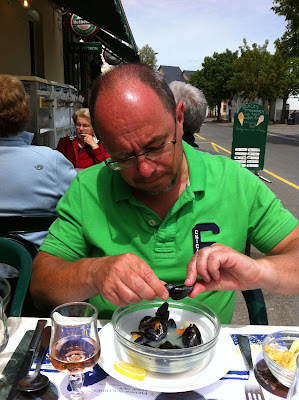 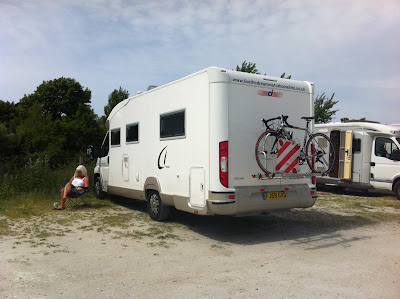