Nido’s parked up at an aire overlooking Lac du Nantua, in the Ain department, part of the central Alps.  The lake’s surrounded by high limestone cliffs; I can see lots of inaccessible caves and there’s also been several landslides, leaving a scar and taking out a few pine trees on the way down.  The town’s a bit tired, like many following the financial crash, although lots of people were out walking, sitting and enjoying the hot, late evening sunshine.

It was very peaceful at Lac d’Ilay last night and the birdsong woke us, so we were up and about early.  The view at breakfast was as lovely as yesterday. It was quite cool in the shade but the rising sun soon burnt off the dew.  We sat outside a while last night, stargazing and watching many passenger planes pass over heading south.  The bats were out catching the insects over the lake.  The plan today was to visit some waterfalls listed in the ‘Wild Swimming France’ book - Cascades de Herisson.  This is one of the main tourist attractions of the Jura and there were already quite a few cars parked when we arrived at 1030.  I’d originally plugged in the wrong coordinates, but this led us to a viewing point high above one of the waterfalls, so it wasn’t time wasted.  We’d already packed a rucksack with food, water and swimming gear and followed the well marked paths up into the damp gorge.  The ground and stones were quite wet and slippery underfoot, but on the steeper sections there were sets of metal steps. The two main falls - Eventail and Le Grand Saut were quite easy to walk to and busy, but our target was the next one - Le Gour Bleu (Blue Pool), where a plunge pool has been scoured from beneath and into the cliff.  There’s a small beach on either side, the far side being in bright sunshine.  The shallows were fine for paddling, although the stones were quite sharp, but we were wearing our swimming shoes.  The water was cool but not too cold, although it took a few seconds to get used to it!  A waterfall pool swim is always exhilarating and this was no exception.  We whooped as we entered the pool swimming against the water that had cascaded down.  The fall was a bit too powerful to swim directly into, although a smaller fall to one side was fine to sit under and enjoy the pummelling.  We were also able to walk behind the main waterfall which was magical.  We were the only people to take a swim - the mad Brits! - but I suspect the people watching were quite envious as it was a hot, sticky morning.  Refreshed and changed, we made our way back down the slippery paths and steps to the van.

Our next stop was planned to be an aire at Clairvaux-les-Lacs, but on arrival the aire was next to a busy, noisy road.  We stayed for lunch and moved on.  The next was in Arinthod, but was bit isolated next to a sports field and so we moved on to Thoirette but again, there was a busy road with a view of the supermarket.  I’d checked them out in ‘Search for Sites’ and ‘Park4Night’ beforehand, as well as the Camperstops book, but I think the photos are taken by estate agents - they hide the truth!  Still, France has plenty of aires and wild camping places to stay and this led us to Lac du Nantua.  It was hot when we arrived but a welcome strong breeze was blowing down the valley and over the lake, so we sat outside the van for a while to cool down.  I had planned to cook tonight, but it was too hot in the van so we changed and wandered into town for something to eat.  Many of the eateries seem to be closed on Tuesday evenings, so we had a beer outside a bar and ended up with some good old fast food - it was cheap and it hit the spot!  The walk back along the lakeside was in hot evening sunshine and we’re now sat outside the van, listening to the birds and watching the sun-glowing cliffs on the other side of the lake.  It’s a fairly noisy place with a road just behind us, but hopefully it’ll quieten down later.

Despite only doing fairly short hops each day, we’ve covered a lot of ground and are still perhaps travelling more than we’d like - it’s a hard habit to break, but we have another seven weeks so don’t need to rush.  We’re heading towards Lac d’Annecy next and further swimming areas in the central Alps.  I think we’ll start to slow down there, spending more than a night in places.  This will allow us to wild swim, enjoy the alpine meadows and views of the mountains and also give me time to get out on my road bike.  I won’t be climbing any of the iconic Tour de France stages (although I am looking forward to seeing Alpe d’Huez and Mont Ventoux), but I can pretend and dream….perhaps I’ll make just a couple of Alpe d’Huez’s 21 hairpin bends before I have to turn around and find a cafe! 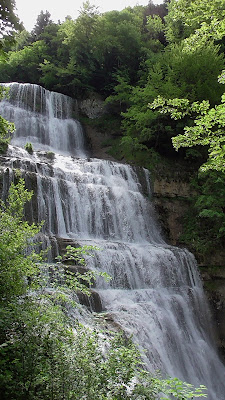