Breathe in and don't look down!

Nido’s parked up at another free aire in the village of Malijai, on a grassy area adjacent to the 30 pétanque courts (yes - 30!), with the old castle walls on one side and the river Bleone on the other.  It’s still very hot at 2130 and, despite a few swims today, we’re feeling a bit sticky.  Nido’s also nursing a few scratches and bruises after an encounter with a huge cable laying machine on a very narrow mountain road, but his pride’s hurt more and nothing that can’t easily be mended when we get home - more of that later.

The wild camp at Lac de Serre-Poncon last night was very quiet and gradually cool enough to sleep.  Our first stop was in the village of Seyne to do some food shopping. The village has an interesting past, with the name of the village dating back to 1147.  We wandered up the narrow streets and steps to the old citadel with a view over the village and the surrounding countryside and mountains.  The village market was on, so we bought some very fresh fruit and veg, some bread at the boulangerie and finally the Carrefour express supermarket.  It took a while for Cathy to squirrel it all away but, as always, she managed it.

Our route out of Seyne took us up and over a mountain on the narrow and mostly single lane D7, with only a few passing places.  There was a sign about roadworks, but nothing prepared us for when we found the road blocked by heavy plant machinery.  We were heading downhill with a steep ravine to our right and no barrier.  The caterpillar blocked the road, so I parked and walked down. Beyond this was another digger and a huge tracked vehicle with a massive roll of cable on the rear, all blocking the narrow road with an edge that crumbled into the ravine below; there was absolutely no way to turn around or even reverse back up the mountain.  I spoke to the gaffer who walked up with me and moved the caterpillar over towards my left, meaning I had to drive around it - you can see where I had to pass it from where I’m standing in the photo!  Once successfully passed that (with inches to spare on the driver side between the crumbling road and the ravine), the large plant was next; the workmen slowly called me forward, checking left and right for clearance and that my driver side wheels stayed on the road and not the ravine!  The trouble was there were too many in charge and the left didn’t know what the right was waving.  Half way through it finally became obvious to them that Nido wouldn’t fit through, so I had to reverse up a little until they moved the plant forward 6 inches, which allowed me to finally to pass through.  We made our way slowly down the rest of the D7 to the relative safety of the road at the valley bottom and pulled over to recover with a brew and allow Nido’s brakes to cool.  We discovered the scratch high up along his passenger side, which must have happened when they realised we wouldn’t fit; it’s about a foot long but thankfully not deep and has only scrapped off the paintwork, which can easily be fixed at home.   I really think they should have closed the road at the top of the mountain - we were lucky.

Our next stop was to check out the aire in Digne-les-Bains, but it was a concrete wasteland area close to a busy road and with no shade, so a no-go.  By then we were feeling pretty hot and tired.  But luckily I spotted a sign for a ‘Plan d’Eau’ a few hundred metres away.  These are community swimming pools, provided free of charge for all to use - what a great idea!  We parked up, changed and walked down.  The pool was huge and is supplied from natural springs, with grass all around and a bar and restaurant.  Lots of young people were enjoying the hot sun and the pool and we were soon joining them - that cool, clear water was amazing!  We stayed for about an hour and had a couple of cooling swims before returning to the van.  I’d spotted the Malijair aire with free services, so we were happy to see the other vans were parked in a grassy area with shade from some large trees and not in actual aire, which was full of cars anyway.  Cathy took a wander down to the river and found and lovely wild swimming spot, with a stretch of deeper water between the shallower rapids.  Again, it was time for a swim!  The water was really warm and it was great fun drifting down with the current.

Back at the van, we ate supper outside, under the awning in the hot, humid evening air, listening to the swifts calling above us, and the cicadas (les cigales) in the trees.  Later on we took a wander around the village - not much to see but there were some nice narrow streets to walk around.  One interesting note was that Napoleon stayed for a night in the chateau (which is just above us) on his return from Elbe on 4 March 1815.  We also took a walk along the river stones, spotting a couple of ammonite fossils.  Some of the locals were also swimming and some playing pétanque on the courts in front of us, which are now floodlit.  Hopefully it’ll will quieten down and cool down later so we can get some sleep.  Tomorrow, a slight change of plan will see us move further south into deep Provence in search of more cooling swimming spots.  I hope there aren’t any narrow mountain roads! 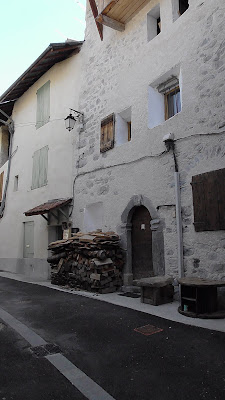 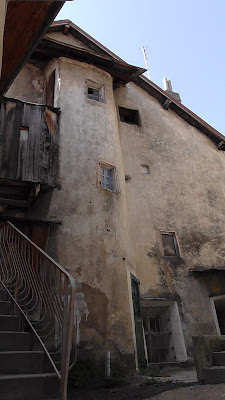 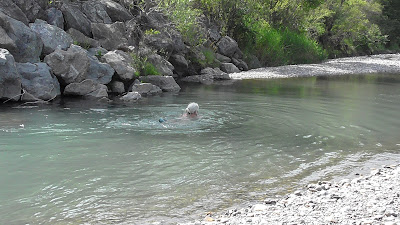 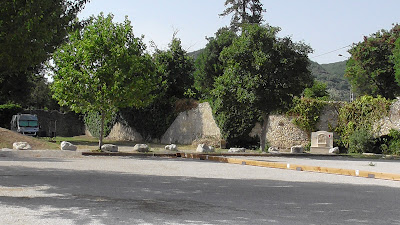 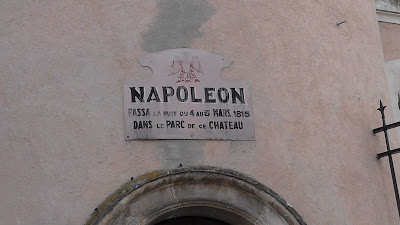 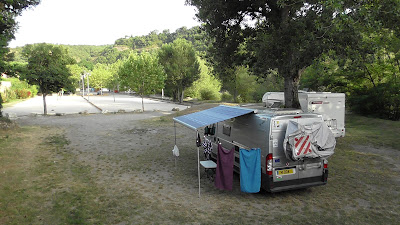 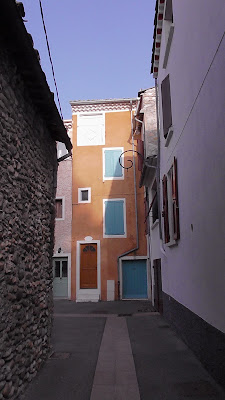 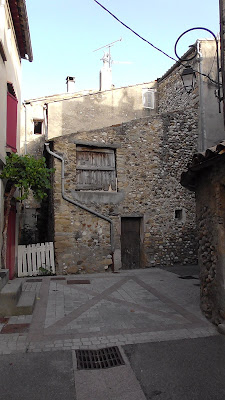