Cycling the hills and valleys in the Savoie Department

Nido’s parked up on the outskirts of the village of La Compôte, on a motorhome parking area across the road from the village auberge.  It’s only a few miles from last night’s stop and I spotted it when out cycling this morning.

Yesterday we drove a short distance through some lovely villages and past meadows to the village of Lescheraines.  I’d spotted this aire on the Park4Night app (it wasn’t in the Camperstops book) and the area looked lovely.  It proved to be the case, with the aire backing onto thick deciduous forest, with mountains all around.

As we got close to the village, I saw some signs for a sprint point for the Tour de Savoie Mont Blanc.  I saw more signs as we stopped at a local produce store and again in the Casino shop.  Only later did I find out that Stage 2 came through the village that day!  I didn’t realise until I googled the race and by then it was too late. Oh well, I’m planning to get out on my bike tomorrow so will no doubt cover part of the stage route.  The aire overlooks the community sports facilities, with a water sports centre just over to the right and football fields just in front of us.  There’s also tennis courts, a large water flume and a swimming lake, a restaurant, plus loads of walks along the river and up into the forests on the steep slopes of the mountains.  I like the way the French provide such great facilities for their community.  They really seem to care about looking after their parish and something we could learn from.  Everywhere is well maintained and free of litter.

Lunch was outside in the sunshine as the external windscreen cover quickly dried in the sun after a few showers last night.  I checked in at the municipal campsite and paid our €4 fee before we took a walk around the swimming lake and along some paths adjacent to a fast flowing river and towards some other fishing lakes.  It was a peaceful walk in hot sunshine, with a few people walking their dogs and some fishermen chancing their luck although, like me, the attraction of fishing is the peace and quiet more than the catching!  We were both feeling weary after over a week on the road (it can be tiring you know!), so after a dinner of Thai green chicken curry, it was an early night.

This morning it was a bit overcast but still warm.  I set off on my bike at about 1000, leaving Cathy with some peace and quiet to potter in the van before she headed out to explore the wild meadows and take some photos.  I took the road back to the main village area, before turning right over a bridge and immediately starting to climb through a series of hairpin bends, doubling back on myself and looking down to the right at where the van was parked.  The skies gradually cleared and the sunny spells were hot, with a gentle breeze - perfect cycling weather.  As I wound my way up and down the narrows roads, I passed rivers and meadows, with great views of the mountains all around me.  The villages of La-Motte-en-Bauges and Le Chatelard had an alpine feel; old wooden buildings with balconies overlooking the meadows and mountains.  There were plenty of ‘Vente Directe’ signs, inviting me to buy local cheeses and other local produce direct from the supplier.

Passing through La Compôte - where we’re now parked - the next village of Ecole was lovely.  I could see a motorhome parked off on the right at the foot of the hills, so cycled down to take a look.  It was a lovely spot but only really space for one van without encroaching on their privacy, but I took a note in case they were gone later.  The village also had a local Flora and Fauna museum, championing the lovely nature in this Parc naturel regional du Massif des Bauges.  It was closed for lunch but the board sit it would be open this afternoon, so I thought Cathy would enjoy this, given she was out photographing the wildflowers, grasses, insects, bees  and butterflies.  The artisan boulangerie also looked good, so we’ll make use of that tomorrow.  Outside the church and village square, there was a board telling of how several men in the village were singled out by the Germans in July 1944 and shot in that very spot, in front of all their family and villagers.  This was in revenge for some resistance activity in the area.  I’ve come across so many of these sad events and always stop on my bike to take a moment to read about it and try to imagine the horror.

Onwards through the valley, I passed through the village of Epernay - not the champagne town but a small, peaceful village in a beautiful place.  A little further on I hit the 10 mile mark and found a stone bench and table in the shade, which was the perfect place to stop, take on some water and enjoy the view.  The return journey took me back the same route, up some particularly steep hairpin bends, before the descent towards Lescheraines.  I stopped off in Le Chatelard to buy a baguette for lunch.  As I cycled into the village, I guy (mid-30s?) came out of a shop selling artisan products, jumped on a skateboard and hurtled down the road at great speed, waving to villagers as he passed, before stopping at the boulangerie just ahead of me.  That’s the way to buy lunch!  The last 4 miles were all downhill until the last stretch back to the van.  Cathy was still out so I packed the bike back on the van, and sorted out my kit until she returned.  We were both ready for lunch and afterwards walked down to the swimming lake for a dip.  It was very calm and not too cool and we had it all to ourselves.  After our walking and cycling morning, this was a welcome refresh.

With the van topped up with fresh water and other tanks emptied, we drove the same route I took on my bike to Ecole.  The motorhome was still parked up where I’d seen it and, not wanting to disturb their peace,  plus the museum was closed, so we doubled back to the motorhome parking here in La Compote.  It’s a pleasant enough spot, still with great views of the cloud-capped mountains and overlooking the village pétanque courts, with a basketball and tennis courts behind us - more excellent community facilities.  Our cup of tea and research-time sat outside was interrupted by a short, sharp rain shower, which turned into a thunderstorm and heavy rain.  But at least it’s still warm outside.

I took a look at the forecast for next week for this area - it’s saying 34’C by Wednesday - that’s proper hot!  We’re slowly making our way south to the next major wild swimming area around Gap and south of Briancon.  But before that I’d like to take a look at Alpe d’Huez, one of the iconic Tour de France climbs, so somewhere I’ve always wanted to see.  I’m not going to be attempting to ride up it, like many thousands do every year (I’m no way fit enough), but I just want to soak up the atmosphere.  This year’s TdF route doesn’t really tie up with our journey and I don’t want to hang around on the off chance that we’ll see a stage.  If it happens it’ll be great.  But having missed a stage of a pro-cycling race yesterday, I now know to do a bit more research on the many other Tours taking place throughout France and see if any tie in with where we are at the time.  We only missed the Criterium Dauphine by a few days, but Ju and Jay of OurTour.co.uk managed to see the stage near Chambery, which is very close to where we are now.  You can read their post here.

Right, it’s been a physical and enjoyable day.  Having expended lots of energy we’re happy to chill out for the rest of the evening.  Time for a beer! 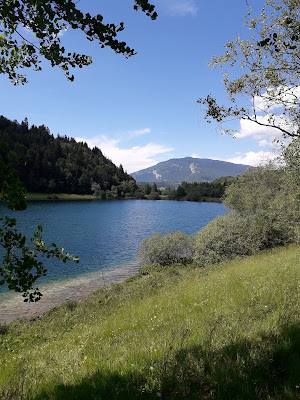 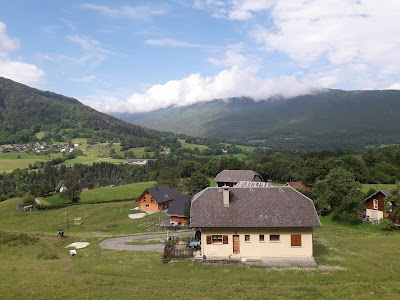 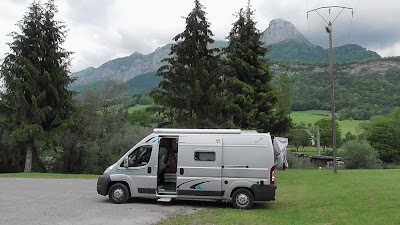