Day of the Cols

I’m mega-happy!  Nido’s parked up on the summit of Col du Lautaret at a height of 2058 metres, beneath the summit of Mont Combeynot. We’re with several other motorhomes on a large patch of ground with scree high above us, surrounded by snow-topped mountains dipped in sunshine and shadow, with deep blue skies and a silence that makes my ears ring.  The bell-wearing brown sheep (and very large, docile but friendly guard dogs who move with them) who surrounded us earlier have moved on to a new area of pasture, encouraged by a shepherd and shepherdess and three border collies.  Today I’ve seen or driven over many of the iconic Tour de France Cols and Alpes that I’ve watched over the years.  I can’t quite believe I’m here!  I’ve taken so many photos and soaked up so many views, I’m sure this day will stay with me for a long time.

We had thunderstorms and rain last night down in La Compote, but we slept well and woke refreshed and ready to move on.  We packed away quickly and drove just up the road to the village of Ecole en Bauges, to make the most of the artisan La Boulangerie Savoyarde.  For some reason they had no baguettes (Madam Boulangerie had lost her voice and didn’t sound well at all, so perhaps this was the reason), but I bought a large loaf and a couple of Walnut tarts.  We drove through the valley and popped out in Aiguebelle, where I topped up with groceries in the Contact supermarket, driving on a short way before pulling in for breakfast.

The plan for today was to head for a wild camping spot above the lake at Saint Colomban Des Lac de Grand Maison.  The drive took us up into the mountains, occasionally dropping into first gear to ascend the severe hairpin bends, and trying not to look down at the steep drops to one side!  As we drove up I again saw the yellow signs for the Tour de Savoie Mont Blanc, the race I missed only a couple of days ago.  They’re heading up this route tomorrow - result!  As we climbed I saw lots of names and signs painted on the road from previous Tours de France.  As we drove over the Col de Frene, I realised we were heading for the summit of the Col du Glandon - another famous Tour climb - the excitement mounted!  As we continued, the cloud and mist increased and it started to rain, increasing as we climbed.  Many cyclists were either making the monumental effort to reach the summit, or were carefully descending on the wet, slippery roads.  At the top of the Col du Glandon, there was still plenty of snow lying around.  A cyclist was trying to take a selfie by the Col’s summit sign, so I popped out in the rain to take it for him.  I’m not sure the heavy rain (with some sleet) was forecast, as many of the cyclists were in short-sleeved tops and it was 4’C at the top, so they must have been feeling the cold, particularly on the descent.

Having topped Col du Glandon, we descended about 4km to the wild camping spot above the lake and pulled over to have a cup of tea.  The wind and rain lashed the side of the van and, although we hung around for an hour or so, there was little sign of it improving.  My plan had been to park here for the night, then tomorrow cycle back up to the summit of Col du Glandon to await the bike race caravan and then the cyclists.  But we really didn’t fancy spending the day and evening stuck in the van in such dreadful weather, so took the decision to move on and we descended through cloud and mist into blue skies and bright sunshine.  I had an aire in mind at Le Monetier-les-Bains, which took us past Alpe d’Huez, one of the most famous TdF climbs.  Geraint Thomas - in the Maillot Jaune - one the stage here last year and sealed his final overall Tour win.  From the valley bottom we started to climb again and, having followed the zig-zag road and through several long tunnels up to the Col du Lautaret I knew this was where we’d spend tonight.  The 360’ views are amazing.  There’s a hotel and several restaurants and shops at the summit with plenty of flat parking.  To cap it all, the summit is also the home of The Lautaret Alpine Botanic Garden - now Cathy was excited!  I parked Nido and we walked up to the Garden, paid the €7 per person entry fee and spent a good hour walking around.  It’s a bit early for the peak flowering period up here, which is from early-July to mid-August, but there was still lots to see.  The garden’s been up here since 1899 and in the winter the plants are under several metres of snow, which insulates them from the cold.  The gardens include alpine plants from all over the world, not just local ones, so there’s plants from (for example), Siberia, Central Asia and China, the Carpathians and the Arctic.

We returned to the van and drove a very short way up a track to our current parking place.  We sat in hot sunshine with a cup of tea before I cooked dinner, eaten on our laps outside as we soaked up the views.  As we ate, the large flock of brown sheet moved behind us to graze right next to our feet. The two very large guard dogs came to see what we were eating and to have a head scratch; one laid down in the shade between us and the neighbouring van and had a quick snooze.  I think he was hoping for some titbits, but when these weren’t forthcoming, he lazily got to his feet and wandered back to the flock.  Dinner and washing up done, we went off in different directions to take some photos and soak up the views, before returning to the van for a tea/coffee and the walnut tarts we bought this morning - we’re stuffed now.  The sun has set over the mountains, which are now silhouetted against a sky turning a gradually deepening shade of purple.  With no artificial light, I suspect the stars will be amazing tonight - I only hope I can stay awake long enough to witness it.  The van’s still warm from all the sun we’ve soaked up during the day, but I suspect by morning we’ll be feeling the chill - the duvet is on standby just in case!

So, the end of an amazing day.  The peace and solitude up here (despite being surrounded by other vans) is overwhelming and, with seeing so many cycling sights that I’ve only witnessed on TV, I’ve made some memories. 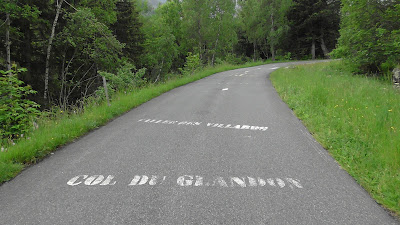 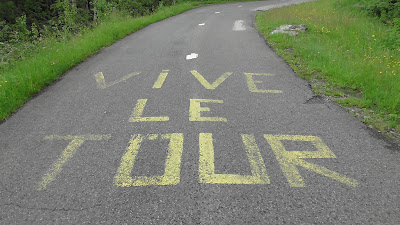 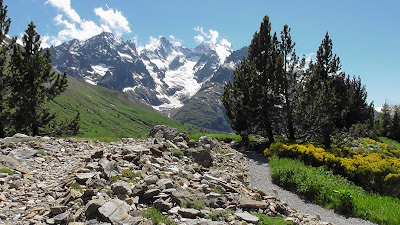 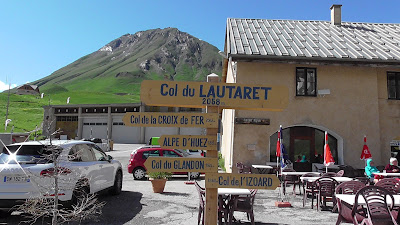 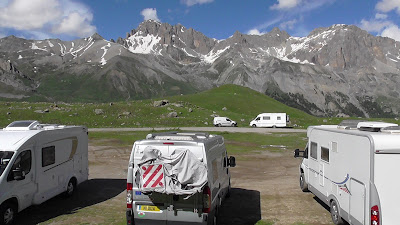 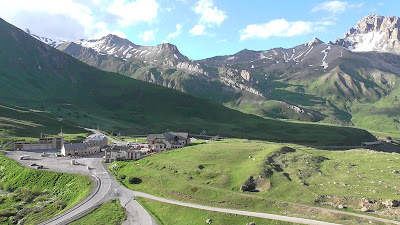 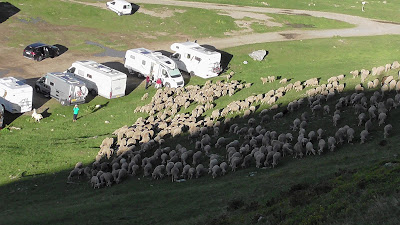 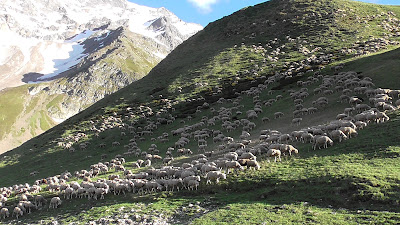