Made it to The Camargue

Nido’s parked up on a large aire in Fontvieille with only one other van for company in a distant corner and nestled between some trees that provided welcome shade in the late afternoon and early evening, before the sun set.  It’s now 2200 and still 29’C outside.  The air is thick with the sound of crickets and cicadas.

We enjoyed our last day around the pool at Les Salles-sur-Verdon yesterday and really missed a refreshing dip and snooze on the sunbed today.  On my way back to the van yesterday afternoon, a large A Class motorhome with French plates was parked near us, with two small dogs playing outside.  I went to make friends with them and the owner popped his head out and explained in French that they were calm and friendly. When he saw me walking towards my van he reverted to a broad scouse accent. His name was Gary Rimmer and has lived and worked in France for 30 years, latterly living in the Alps in the small village of La Rochette, near Chambery, not far from where we stayed a week or so ago.  We got chatting (over a pastis!) and he explained he’d decided to try something new, having been a long-distance lorry driver most of his life.  So he sold up, bought the motorhome and has now been full-timing for all of two weeks.  His story about his early years and how he ended up in France was fascinating and we had a good chat late into the evening, having invited him to share our supper of chicken curry, rice and chapatis.  He’s in the process of developing a website to document his travels - happy2dream.com and is also on Facebook and YouTube.  This is all very new to him and he’s not sure where to head (although he loves the mountains so he’ll most likely head for them), so he was interested to learn more about full-timing and what people do.  I suggested a couple of blogs for him to follow.  It was a lovely, funny and interesting evening and he was good company and I’d recommend taking a look at his social media links; he’s already getting loads of interest from followers.

It was very muggy and hot this morning, so we took our time striking camp after breakfast.  Having said goodbye to Gary and the two dogs - Millie and Happy, we hit the road, heading for an aire in Saint-Chamas.  Our route took us through some lovely Provence villages and countryside, with fields of vineyards, lavender and sunflowers and we stopped at a picnic site for a lunch in the shade.  The aire at Saint-Chamas is next to the marina and right on the water’s edge of Etange de Berre, a saltwater lake on the eastern edge of The Camargue.  However, the aire was closed due to road and marina improvements, although we were still able to park up.  It was really hot but there was a good, if warm, breeze blowing off the lake.  The water was warm and a bit ‘syrupy’ with plenty of algae on the bottom and floating around.  It wasn’t that refreshing and the parking spot was in full sun, so we decided to find somewhere with a bit more shade.

This led us to our current spot in Fontvieille, about 500m from the town centre.  The aire’s hemmed in on two sides by steep limestone cliffs, but there’s plenty of trees so we were able to find some well-needed shade.  Cathy had been feeling the effects of the heat today, so she took some cooling down.  We’ve done very little here except try to cool off, take in fluids and chill out.  I’ve cooked supper and we’re now sat looking at a sky turning purple towards the west.  Thankfully there are fewer flies here than in Les Salles-sur-Verdon, so we’re able to sit outside without resorting to the Avon Skin So Soft to keep the blighters at bay!  We haven’t had the energy to explore the old windmills that we can walk to from here, or the town, but may take a look in the morning.

Given it’s still going to be hot for several days at least, I’ve found another wild swimming spot about 40 minutes to the north, so we’ll head there tomorrow for what we hope will be a cooling river swim.  After that perhaps we’ll be refreshed and ready to explore The Camargue.  In the meantime I’m enjoying sitting outside in the late evening, listening to the cicadas in the trees and grass and the swifts calling as they fly above us. 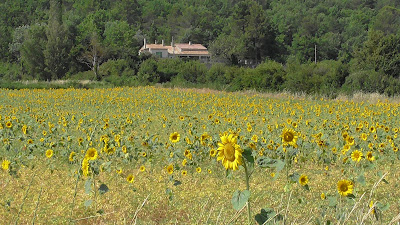 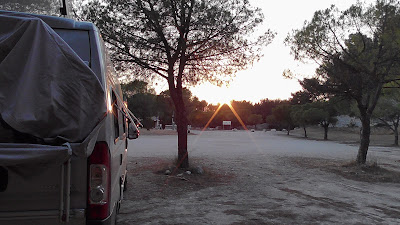