Day two at Camping Schwarzwaldhorn and we woke early to another lovely hot, sunny day, albeit with a bit more breeze, which was welcoming. Breakfast done and rucksack packed, we were out of the van by 0800 and walked down into the village, soon crossing over the road and turning off to start a gentle climb up the Haslach valley. Today we planned to follow a circular walking route, taking in several old water mills, the route known as the Mühlenwanderweg. The day was warming fast and we followed the road past immaculate alpine houses and gardens, before turning off onto a track, climbing higher past sweet-smelling pastures and wild flower meadows. Many of the grass pastures had been cut and were now being turned - mostly by tractor but sometimes by the old fashioned way of manual labour - ready to store as silage for winter feed.  Another point we'd noticed was the very large, long and well-stacked wood piles. Wood isn't in shortage here, but clearly they use a huge amount during the winter months, when this area is covered in snow and ice and many areas never enjoy direct sunshine.  From the different colours of the wood, we could tell there were several years' of seasoning in progress.  Even now, in the heat of summer, the sweet swell of well-aged woodsmoke is prevalent.

We continued to climb, grateful for the deep shade provided by the very tall trees, mostly conifer, but occasionally oak, beech and hazel. The air was warm and scented with pine resin and Cathy even found some tiny, ripe alpine strawberries. We didn't see another soul until we started to drop back down into the valley.  All the paths are very well sign posted and at one point we saw a signpost for a waterfall about 3km away.  It meant doubling back a little, but we decided this would be worth it.  We eventually left the forest and walked up a steep road in full, hot sunshine, before turning off along a rocky track, heading steeply uphill alongside a fast flowing stream. We reached the waterfall and enjoyed its coolness from the bridge above, before doubling back to a spot that allowed us to get to the water.  The spring was ice cold and clean and we filled a water bottle, drinking this clear, refreshing  mountain water.  I had a paddle but Cathy stripped off to her underwear for a longer cool off, including soaking her hair.  I managed to split my shorts getting out of the water - clothes just don't last these days - they were only 20 years old!  Cooled and invigorated, we ate a sandwich before reversing our route and picking up the Mühlenwanderweg again. Descending into the valley, we stopped off at Wehrlehof-Mühle, which was open with a visitors book and local jams on sale with an honesty box. This mill was built in 1879 and was used to grind the local walnuts to extract the oil. We had a wander around inside, looking at the tools, utensils and nails they'd found when digging around. We sat outside in the shade to finish the rest of our lunch, using an old grindstone as a table.  It was very peaceful - the stream running below us, birds singing and the bells around cows' necks ringing harmoniously in the next field.  Back down in the valley it was now really hot, so we decided to head back, but after 5 hours and about 8 miles of steep mountainside, we were happy. On the way back we stopped off at the Konditerei (cake shop) and bought some Black Forest Gateau.  Well, we'd expended loads of calories on our walk and we were in the Black Forest!  Now "I don't eat cake!" but it was light, creamy and very tasty and went down well with a cup of tea. A quick change and we were off to the swimming pool again, where we spent the rest of the afternoon swimming, sunbathing and reading.

Cathy returned to the campsite and I popped into the local supermarket for some breakfast bread and tomato/curry sauce for our Currywurst.  I also spotted some local clear 'firewater' made from cherries - well, it'd be rude not to! On the way back I watched the baker carry his well-risen dough on a plank to the wood-fired bread oven outside - a true artisan. I fried some onions and cooked some bratwurst on the BBQ, enjoyed with the bought curry sauce, a salad and a glass of local, light red wine, still a bit fizzy given its youth.  Cathy was almost falling asleep in her dinner, so after washing up she crashed out, while I sat outside in the warm evening, watching the hills darken. It's now 1030pm and there's still a warm orange glow in the sky to the west - I love these summer evenings in mainland Europe. The campsite's quiet, the odd quiet murmuring in caravans and tents and the occasional car or motorbike along the village road. The flowing river below continues to fill the silence as it tumbles over the rocks. What a beautiful way to end a lovely, relaxing day.  Tomorrow Cathy's planning a lazy day at the van and the pool, while I'm going to go for a long bike ride along these smooth, undulating and sometimes steep forest roads.  Followed by the inevitable swim and sunbathe of course! 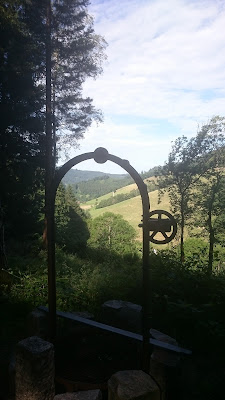 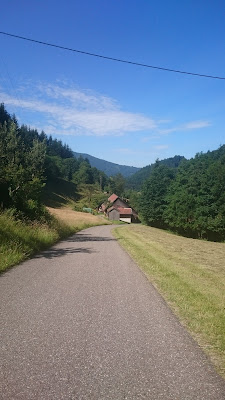 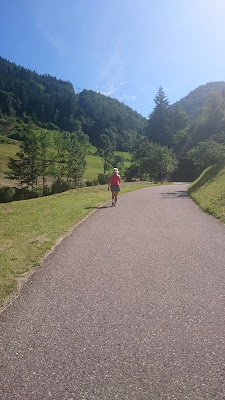 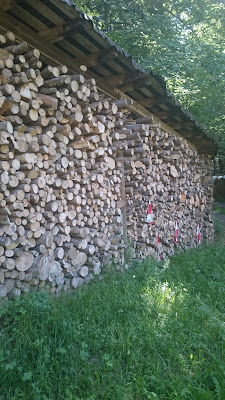 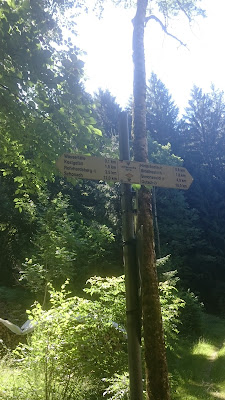 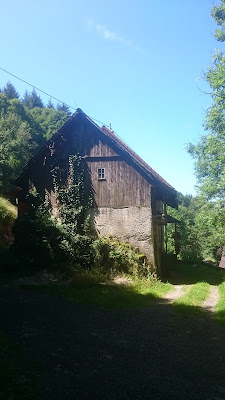 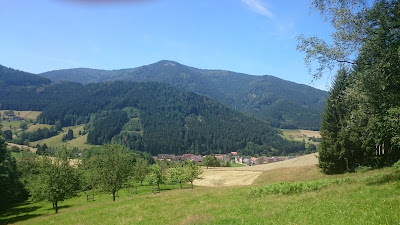