Donauwörth by the Danube

Nido's parked on a free Stellplatz in the town of Donauwörth, another town on the Romantische Strasse. We're parked side on with the sliding open towards the river Danube.  This historical town was in early times a fishing settlement, on the confluence of the Wörnitz and Danube rivers.

We slept well as it cooled down during the night and after breakfast, topping up fresh water and dumping fluids, we drove south, following the brown Romantische Strasse signs along the road.  Our first stop was the town of Rothenburg op de Tauber. The silhouette of this former Imperial Free City rises high above the Tauber valley. The town is surrounded by historic fortifications, with seven well-preserved towers and walls, which we were able to walk around in places. The medieval town centre is full of lovely half-timbered houses and a Baroque town hall. We enjoyed our walk, although it was quite touristy. Back at the van we carried on down the road, planning to drive for another hour or so. We pulled into the Stellplatz at Nördlingen, a town built in the centre of a huge meteorite crater, but decided it was a bit too open and noisy for an overnight stay, so decided to carry on to Donauwörth. Once parked up, we had a brew sat overlooking the Danube, before walking along the river. Cathy cooked a lovely dinner of Schnitzel, with garlic potatoes and salad. We drank some of the local young Riesling wine, very similar to Portugese vino verde, sat outside the van in the shade. Although sunny and warm with clear blue sky, it was blowing a hooley, which caused some of the small sweet chestnuts in the tree above to fall and bounce around and on us!  Later we walked into the town, but it was a disappointment as it all looked pretty new - I think the RAF beat us to it! So back at the van, it was brew and chill time before bed.

We've decided a change of plan is called for.  We were aiming to drive all the way down to Füssen, but we think most of the medieval towns will be similar.  So tomorrow we're veering off to Lake Constance (or Bodensee as the Germans call it), to find somewhere for a few days to relax, swim, cycle and enjoy the lake. That's the beauty of the campervan - the ability to change direction at the drop of a hat. 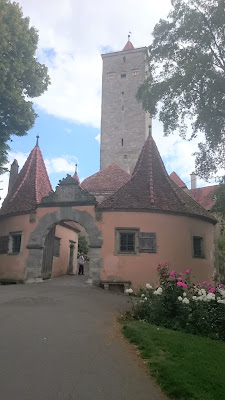 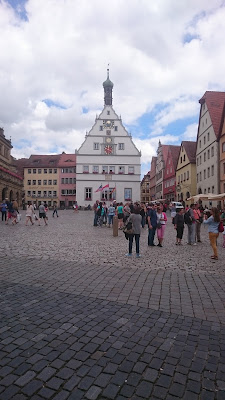 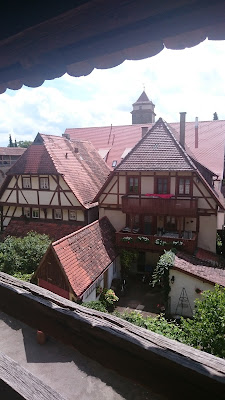 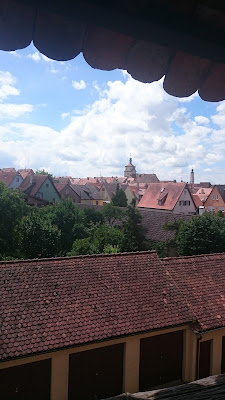