Nido's parked up at a private aire in Tardinghen, about 1.5km outside Wissant. We tried the latter but it's a busy Saturday, a French public holiday and the weather's good - a grand slam! But I think we lucked out, as this aire is great.  Basically it's a strip of grass around a farmer's field - of what looks like was wheat or barley - that's been recently harvested.  No facilities and €6 per night, but it's very quiet and there's loads of room to spread out, plus we sat in the sunshine this evening until 2145.  The farmer's just been to collect the fee, with a smile and a business card - and his dog, who earned one of our doggie treats, as did the two dogs in the Dutch van next door. Our last evening is usually spent in a hot, cramped aire but tonight has felt like a bonus extra night on holiday.

Before I go any further, Cathy has insisted I tell the tale of the shorts.  I hate shopping for clothes and see no point in wasting money to have them all festering in drawers and wardrobes.  So I employ the 'Lean' process of 'just enough, just in time'.  In other words, I wear my clothes until they wear out and then I replace them - makes sense (at least to me) and saves money.  This holiday, I've 'worn out' two pairs of shorts, both of which I've had for about 20 years (so I'm a little upset they haven't lasted very long!). The first pair blew on our walk around the mills in the Black Forest, as I bent over to step out of the waterfall stream. The second pair gradually split in a couple of places in the 'rear' and were confined to the bin today.  I have to confess to have noticed this a while ago, but as the split was hidden, I figured they'd do for a few more months - but the rip was spotted! Both pairs were very comfortable (as clothes should be) and will be sadly missed - RIP shorts 😔

We slept in late this morning, until about 0830. It was dull and cloudy but still warm. Breakfast done, I decided not to join the long queue of vans waiting for the service point - we had enough water and although the loo could do with an empty, we were bound to pass another Aire on the way to our next stop. I plugged in the co-ords for an Intermarche supermarket and off we went.  On arrival, although the supermarket was large, the parking area wasn't - something we've seen more of this time in France. So I just stopped to fill up with diesel and we plugged another into the satnag. At this one we managed to park OK, but the journey was painful, with traffic jams at roundabouts - I suppose it is a holiday weekend but it's something we've not experienced in France too often.  We had a shopping list of food items to take home, so purchases done and stowed away, we headed for the Aire at Wissant, where we normally stay on our last night as it's only 20 minutes drive to the tunnel. But, as I wrote above, it was toppers, although frustratingly a small French hatchback car was parked in one of the pitches.  So,we drove up to another aire at Escalles, to sit outside and eat lunch and look at other options.  That one is day time parking only, which finally led us to this Aire, which is a great find.

We parked up on the grass and had a brew in the sunshine, before packing our rucksack and walking the 1km to the beach, a quiet spot between Wissant and Cape Nez Blanc, the French equivalent of Dorset's Golden Cap. The tide was a good way out, so we walked towards the sea, dumped our gear on the damp sand and enjoyed a swim in warm seawater - our first sea swim - on the last day of our holiday.  After the regulatory 15 minutes in the water (time to soak up the minerals), we walked back to the hot, dry sand.  Cathy had a snooze while I mooched around the beach, drying off and topping up my tan, while successfully searching for some sea glass for Cathy's collection.  Back at the van, another brew sat in the sunshine, before showers and a dinner of BBQ'd chicken and German sausage, with fried onions and a tin of tagine chick peas.  Washing up done, we sat in the stubble field with a tea and coffee to enjoy the last of the sunshine on the last day of our holiday.  Everything's packed away, passports have  been retrieved from the safe and alarm set for 0500 tomorrow morning, ready to catch the 0820 tunnel.

We've made a key decision over the last couple of days - we're not returning to Europe until we retire, and then it'll be our first long over-winter trip into Spain and Portugal. All very exciting!  When that is depends on when we achieve our financial independence target...... So time for bed now - early start in the morning. 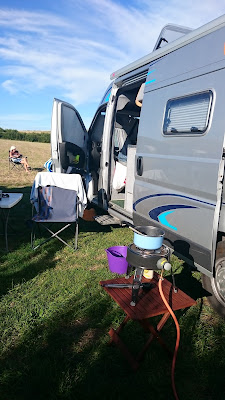 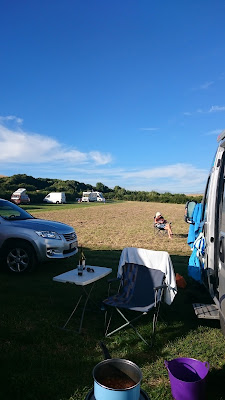