Nido is parked up at a free aire in the village of Faviéres, in the Lorraine region of France (where the quiche comes from!).  When I say 'free', I mean free to stay, free electricity and free water.  This is one of the ways the local French communes entice in visitors like us. We'll spend some money in the boulangerie and we may even eat in the village restaurant tomorrow night.

From the celebrations, singing, car horns and fireworks last night, I can only assume that France beat Portugal in the Euros final.  But they quietened down reasonably early (about 0100), to be followed by the workmen of Gérardmer started up their JCBs and diggers next to the Aire at about 0500!  Still, we slept well in between and after a very hot start to the night, with all windows open, it felt much cooler in the morning.  Breakfast done, secured for the road and gash ditched, we left and climbed up through the forest, before descending into the rolling plains of Lorraine, packed with fields of crops and small farming villages.  We stopped off at a small Carrefour supermarket on the way to top up with food and arrived at this Aire at about 1230.

There are five large spaces for motorhomes, with great 360' views of countryside all around. There was one French van here when we arrived and they were plugged into one of the free electric sockets, so I took the other.  We lunched outside in hot sunshine on the grass next to our parking spot. The aire is next to two small lakes - Base des Loisirs. One is a swimming lake (which we'll enjoy tomorrow) and the other is a fishing lake, adapted to allow disabled people to fish.  There's also a sensory garden and box-hedge maze.  There's a campsite above the lakes (for school and disabled groups) and a number of disabled children were laughing and enjoying the lake - what a fantastic facility.  If that's not enough there's a football pitch and a large restaurant with a good, reasonably priced menu and terrace bar. From the programme of events it's clearly a meeting place for the villagers.  We walked around the lake, sheltering under a tree during a short but intense rain shower, before returning to the van.  Cathy had a snooze on the grass while I researched some potential stops for the rest of this week.

I prepared a tomato and onion salad for tonight, using the last of our baguette in the bottom of the bowl to soak up the juices and added some marjoram we 'gleaned' from the medieval garden at Murbach Abbey. We took a walk around the village, which was quiet but fairly large, albeit spread out. There were some lovely old buildings, many with the original large arch and gates (used for horse and carts), leading through to large old barns and courtyards.  Some were recently renovated but others were dilapidated and ripe for conversion - and some up for sale if anyone's interested!  We also came across a lavarie where the village women washed clothes by hand.  Looking up, there were several lacy bras thrown over the large oak beams under the roof - no doubt a regular meeting place for the young people! Back at the van, I cooked steak and sausage on the BBQ and we sat outside to eat. It was a little cooler now, but at least the wind had dropped.

There's a large car park by the lake and the local neds were doing regular circuits and wheelies on their mopeds (sounding like large angry bees) and the occasional older ned screeching around in their hatchback - clearly they have plenty of disposable income for new tyres.  When bored with that they headed over to the lake to let off firecrackers and rockets - boys will be boys!  It's calmer now and we're sat outside with a brew, watching the sunset through the trees.  It should be a quiet night, the only sounds being sheep, cows, donkeys and the odd angry bee' moped.  We've some sleep to catch up on after the Euros celebrations! 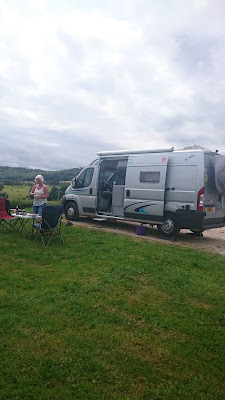 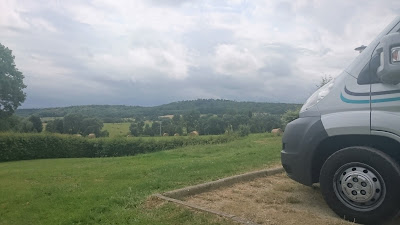