Nido is parked up at a Stellplatz beside a flowing river, on the edge of the town of Röttingen. It's right on the Romantic Strasse and a typical small, medieval town, surrounded by the old walls and high towers at the town gates.  There was only us and an old Austrian Motorhome here when we arrived (and it looked like they'd been here for a few weeks) although more vans arrived during the day. Although only 30 minutes from our night stop, we felt we needed a day of little travelling and some decompression time. So we're staying here until tomorrow morning.

Röttingen was first mentioned in 1275, although the first settlement was thought to have been around the 5th century AD.  In the 16th century it became more economically important  because of the wine production. In August 1953 Röttingen was proclaimed the first "Europastadt" in Germany.  Young people wanted to build a common Europe. The proclamation aimed to demonstrate the idea of living in unity and freedom and marked the start of the journey to the European Union. Given events in the UK over the past couple of weeks, and having walked around this restful, peaceful place, it's a shame others don't feel the same way.

After breakfast we followed the satnag to this stop, driving across very smooth roads through fields of wheat, potatoes and corn. Once parked up we had a walk around the town - very pretty and didn't take long. In particular, the allotments running alongside the river were immaculately kept, with a mix of vegetables and flowers, each with its own old-fashioned water pump and shed.  We said " morgen" to a few of the owners as we walked around, finishing up at the bakery to buy some bread.  This being our first trip to Germany, the variety of breads were a bit overwhelming, so we pointed at one we liked the look of and with a "bitte", "danke" and "auf weidershen" we returned to the van. After two long days driving we still wanted to stretch our legs a little, so took a walk along the river footpath. Back at the Stellplatz we sat in the shade as by now the sun was out and it was hot - yay!  A brew and a light lunch and it was time to chill, read and watch the wildlife and flowing river.

A little later I unhooked the bike and went for a spin. Turning right out of the Stellplatz, I was soon cycling along a smooth, wide cycle path through the valley, both of the steep sides covered in vines. The Germans really know how to promote cycling. I followed the green cycle signs - even through the towns and villages - and felt safe away from the traffic.  If it was like this at home, I'd be out every day, rather than staying off the roads to avoid the speeding motorists.  I only rode out for about an hour, but it allowed me to see some of the real southern Germany - lots of small, well-tended allotments, healthy fields and clean, tidy and very pretty villages. Back at the van we sat in the sunshine before enjoying dinner sat outside by the river.  We finished off our day with an evening walk around the town, pausing to listen to the live music at the outside concert by the wine museum.  A local chap stopped to speak with us, telling us about the structure of the medieval houses and how many had been encased in concrete but we're now rotting from the inside.  He also told us about all the younger people moving away, leaving just the older generation living in the town, although a few Syrian refugees had arrived, bringing a welcome addition of young children to keep the school going.  Tomorrow we'll head further south down the Romantic Strasse. 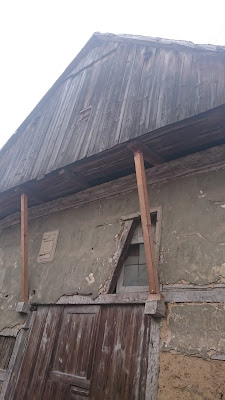 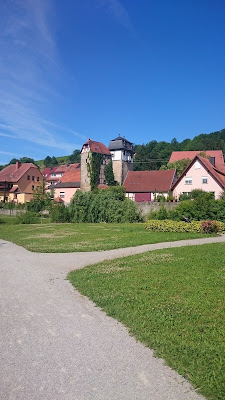