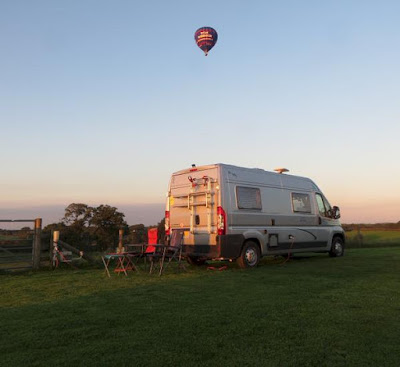 We're taking as many short weekends as we can before the winter starts in anger although, even then, so long as it's not snowing or icy, we plan to use the van throughout.

This weekend was spent on a CL in Shropshire - Birch Hill - about a mile outside the market town of Ellesmere.  After picking up El Nido from storage on Friday evening, we drove down the A49 and arrived at about sunset; the owner was cutting the grass on a sit-on mower as we drove up the long drive and pointed out the pitches.  The CL is spread across 2 acres but they stick to the 5-pitch rule, so there's plenty of room. We chose to park up near the farmhouse, on top of the hill and with 360' views, including the hills of the Welsh borders. Electric plugged in, we enjoyed a glass of red wine as the stew Cathy had made earlier in the day warmed up in Oska (our Remoska oven).  The site was very quiet and after dinner and a long day we were soon nodding off.

Next morning after breakfast we made a packed lunch and headed out for a 10 mile walk; the day was surprisingly warm for the time of the year, with unbroken sunshine and no wind. The walk started from the Mere at Ellesmere (makes sense how the town got its name now I re-read this!), but we had a mile to walk to the start point.  It started with walking around the western edge of the Mere through a park and gardens.  It was at this point that Cathy had a bit of flash back to her childhood.  She always remembered visiting some old aunties who lived in three small adjacent cottages and walking down to some water to feed the waterbirds and paddle in the shallows.  But in her mind she thought this was Ellesmere Port. Now all became clear as she recalled the exact spot where she paddled around 45 years previously.

The walk continued to the top of the Mere before heading off across rolling fields - lovely countryside with soft green hills, rarely used footpaths and, thankfully no angry cows (or 'bovins' as we've now nicknamed them after seeing a sign by a field in France).  Eventually we joined a narrow, hedge-lined country lane and followed this into the village of Welshampton.  Passing through the village, we crossed over the main road to walk out of the village before reaching a bridge over the Shropshire Union canal, where we dropped down to follow this all the way back to Ellesmere.  It was extremely peaceful and very warm in the sunshine and we stopped off along the way to eat our lunch.  After a few miles we were back in the town and had a wander around; a typical small market town with a few independent shops including a nice looking deli (we resisted!).  We walked back up the main road out of town and to the CL, arriving as a couple in a caravan were setting us.  We sat outside in the sunshine, enjoying a brew and the peace.  Chatting to the couple, they had just sold their house in Northwich and had bought a new house in Ellesmere, which was currently being finished off.  They planned to stay on the campsite for about 4 weeks, which would allow them time to fit carpets and so on before moving into their new house, close to their son and his family in a local village.  They'd over-wintered in Spain over several years to it was interesting to hear where they stayed and the best winter weather spots. 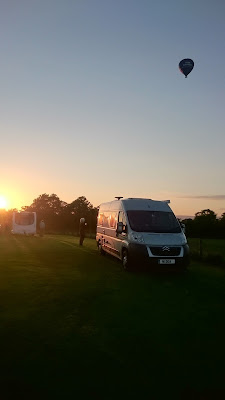 Later, as the sun started to set, we enjoyed a G&T before spotting a hot air balloon as it rose above the trees and slowly flew over - the air was very still, no breeze at all. The CL owner joined us and said they see them quite often as they're made in Oswestry, a few miles up the road.  Dinner eaten, we played a word game (I won!) and read for a while before heading off to bed.

The next morning was again clear, warm and sunny. After a lazy breakfast Cathy secured inside the van while I emptied waste then we drove off, heading for the Llangollen area but with nowhere in particular in mind to stop.  On the way through the town we spotted the sign for Horseshoe Falls, so followed the road up and managed to get a space in the free car park.  The view from there, down to the falls was lovely.  We had a walk around then followed the canal towpath towards Llangollen.  On the way we took some metal steps down to the rocks alongside the river and watched some kayakers shooting the rapids - looked fun!  Back on the towpath we eventually arrived at the marina and dropped down into the town, which was really busy.  We'd made the basic error of not taking our lunch with us, so ended up buying a couple of oggies, one of which we ate at down by the river on the way back.  Back at the van, we made a brew and chilled out for a while before driving back to storage and home. 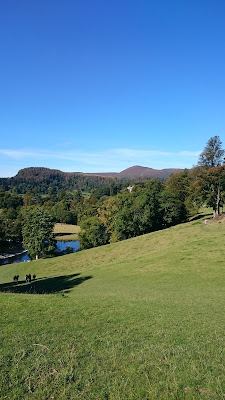 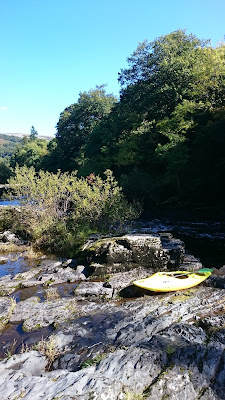