My buddy Dave Bonas reminded me this morning that it's 36 years to the day that we joined the Royal Navy at HMS RALEIGH at the tender age of 16 as Junior Assistant Writers (2nd Class) - you couldn't get any lower than that!  Where has the time (and our hair and six-packs!) gone?

El Nido is parked at the campsite at Gordale Scar.  This is an amazing place, a deep, steep-sided limestone gorge with several waterfalls.    We woke quite early this morning and were up and about by 0800.  I'd not slept well - ill in the night - so I felt a little out of sorts.  All packed away, waste dumped and topped up with fresh water, I paid for our stay - we'll definitely return to Kettlewell.  The drive took us over the hill tops, along narrow, winding and very steep roads.  Luckily there were plenty of passing places so that made it less stressful on the driver - me!  We drove straight to Gordale Scar but I forgot to stop at the Farm Shop to get some Yorkshire Chorizo, chicken and wine - my bad.  I thought we'd be able to get some groceries in Malham during our walk - another poor assumption!

The campsite is very informal - no pitches - just go where you want.  The owner is a bit......eccentric is probably the kindest word.  The entrance is full of junk, bags of old newspapers and hundreds (and I do mean hundreds) of empty disposable BBQ trays.  I eventually tracked him down to what I thought was an abandoned caravan; I think he lives in it.  At £10 per night this is a bargain, even with very basic facilities.  So we drove down, found a level pitch, close to the beck and surrounded by sheep and prepared for our walk.

Leaving the van with our rucksacks we walked up the gorge to the waterfall at the end.  The guide said we could scramble up the left side of the waterfall to climb up to meet the path at the top.  Maybe 20 years ago!, although Cathy was keen.  There was an alternative route, back out of the campsite and climbing around the spur of the gorge side, to meet the waterfall path at the top.  We stopped at the summit for lunch, overlooking the campsite, with Nido a tiny toy van down below by the stream, surrounded by sheep.
On we walked, at a high level with great views all around, before dropping down to Malham Tarn, a large lake.  We walked alongside this for a while before rejoining the Pennine Way and walking through a dry river bed up to the top of Malham Cove.  The view from here was amazing and we enjoyed walking across the deeply-creviced limestone pavements.  We stopped here for a brew before descending via the steep steps to the bottom of the cove.  We walked to the end, with the stream water coming up from an underground spring at the base of the cliffs.  Above us a few madsters were rock climbing.  We followed the path out into Malham village, hoping to buy a few groceries - no joy, just a couple of pubs, tea-shops and a little shop selling not much except for ice cream and frisbees!  So we'll need to make our victuals last for two days.


On the way back we stopped at Janet's Foss, a waterfall surrounded by trees and with a great swimming pool at its base.  Cathy had a paddle but really wanted to swim.  In the ash trees were about a dozen bee houses made out of books about bees - all a bit beezarre ;-)

Back at the van we sat outside with a brew until the sun disappeared behind the gorge, before preparing dinner outside (pork & Apple cheeseburgers, salad, sauté potatoes) and eating it inside to avoid the midges.  Washed up and locked away, we sat in the van as night quickly descended.  With no artificial light here at all it is proper dark by 2030.  We finished off with some hot chocolate before crashing after another enjoyably physical day. 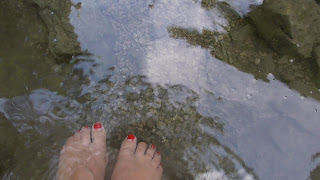