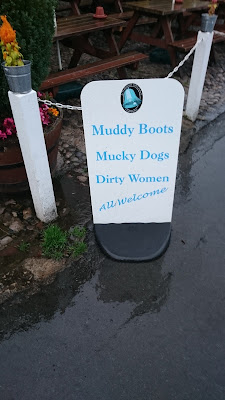 El Nido's at Causeway Croft Caravan Park, Kettlewell, in the depths of Wharfedale.  Ray and I cycled through here (at speed!) last year at the Tour de France.  We camped at Kilnsey Crag and cycled up the first real climb of the Tour - Col de Cray - which took us through this village.

We woke to warm sunshine and had our breakfast sat outside at the CL by Jervaulx Abbey.  All packed up, we drove out, stopping on the way at Berry's Farm Shop, where I bought some large field mushrooms, red onions, local goat's cheese, pork scratchings and brandy snaps - what a mixture - and I only went in for bread which they didn't have because it hadn't yet been delivered!  We started to climb a 25% hill with some 'Go Nido Go' encouragement, pulling over regularly for oncoming traffic. We eventually reached the top of Cray and descended through Buckden and Starbotton to Kettlewell, all very familiar from last year.  We pulled into the campsite and the very friendly owners pointed out the available pitches, electric and facilities and left us to it.  While Cathy sorted out I walked to the village shop for some bread and red wine.

We'd already prepared our packed lunch and were soon heading out, very quickly climbing the steep hill towards Middlesmoor Pasture.  With a bit of a scramble through the rocks we reached the first ledge and stopped for lunch.  Fortified, we continued to climb, stopping now and again to admire the view (and get our breath back!).  We reached the top and started to descend into the next valley.  Reaching some trees, we faced some serious downhill scrambling over rocks, before stopping in bright sunshine for a brew and flapjack.  As we approached Arncliffe the rain started and stayed with us, on and off for the rest of the day.  Leaving Arncliffe, we followed the path along the River Skirfare and at the hamlet of Hawkswick, started to climb again.  We topped out at Knipe Scar, with a view over the fields in Kilsney where Ray and I camped last year, following the shoulder of the hill around before starting a slippery descent into Kettlewell.  By now the sun was out again and we were drying off.  As we approached the village the heavens opened again though, and we arrived back at the van in heavy rain.  We got the heating on, hung up our wet clothes wherever we could and had a quick beer while the water heated up.

Both showered, clean and changed, with the inside of Nido looking like Widow Twanky's Laundry, we left the heating on and walked the short distance to the Bluebell Inn.  This is a typical, local and friendly pub, with an old dog who clearly owns the place! The woodburner was lit and it was very cosy.  We had a beer then ordered our food - shared potted shrimps, then Cathy had the speciality - homecooked meat and potato pie, which was enormous and delicious.  I had a pork chop from 'Colin' - I have no idea if Colin was the pig or the breeder!  It came on a bed of mash with mustard sauce and was both huge and very tasty, very much like the 1/4 of free-range pig we bought a few years ago.  We shared a bowl of veg and at the end were stuffed.  We wobbled back both tired from our long walk and full from great food, back to a bit of a steamy van - it'll be dry in the morning!  I'm hoping for a dry spell tomorrow so I can finally get out on my bike and repeat some of the riding I did with my wingman last year.  Until then, I need to rest this food-filled belly.  I think we'll both sleep well tonight in this dark and silent corner of Yorkshire.


Email ThisBlogThis!Share to TwitterShare to FacebookShare to Pinterest
Labels: yorkshire