El Nido's parked on a CL at Park House, by Jervaulx Abbey near Ripon.  We hadn't planned to stay here, but more of that later.  However, all turned out well in the end, as we're the only ones on the well-kept site, with views over the parkland of a large estate, with hills in the distance. The RAF keeping flying over at speed in Typhoons - I'm surprised as firstly I thought they'd all still be on long-weekend and, secondly, it's past their tea time!

It rained hard last night and we found more water leaks.  We already have one in the bathroom, which I think is where the water hoses connect to the basin tap, but I can't get to it.  It's constantly leaking about half a mug of water a day onto the bathroom floor.  The heavy rain last night started to leak through the felt covering of the inside of the sliding door.  We've seen this once before, but thought it was because we hadn't closed the door properly, but last night it was was well and truly closed.  I think it's caused by the felt lining overlapping the rubber door seal, so the the felt acts like a wick and the water takes the easiest route - inside the van.  It will certainly need sorting, along with the other leak, so Nido will need to go back into A&E  soonest.  It did put a bit of a dampener on the evening though (pun intended!) and, with the combined effect of listening to the fast-flowing river outside, it's no surprise we both had watery (ie swimming) dreams!

We woke to relatively clear skies, a bit of a breeze and a few clouds scudding across, so it gave us the opportunity to throw open all the skylights, doors and windows to vent the van.  We both made use of the free, hot showers with no push button - a luxury on most campsites and a change from our 'submariner' dhobies in the van.  Feeling (and looking) clean, we enjoyed our breakfast sat outside overlooking the river.   Then it was chores time.  Cathy gave the van a good scrub out and did the washing up across the road.  I had my usual outside jobs - fill up the fresh water, empty the 'loo juice', pack away the seats.  All sorted, with fridge on battery and fully secured, I plugged in the coordinates for our next overnight, a Britstop near Aysgarth.  The 'satnag' sent us the wrong way initially, so we ended up in Keld, where we walked the other day.  We reversed our route from there and stopped off in Muker for bread and eggs, with a side of very tasty homemade flapjack. Shortly after we turned off onto a 25% uphill road, heading over the pass into the next valley.  With a few encouraging shouts of 'Go Nido Go!' he made his way up the hairpin hill, luckily meeting nothing coming down.  It was a bleak hill top, nothing but moor and sheep and we eventually turned into the main road.

We arrived at the Britstop just before opening time and when the doors opened I popped in with my Britstops book to ask if it was OK to stay.  The old chap behind the bar told me they were no longer part of Britstops, which surprised me a little as they only joined the scheme in July (I've since found out that they are indeed still in the scheme but this chap wasn't aware). So we drove off to a close-by CL next to another pub, but they were full.  So, two attempts to stay overnight, two strikes. I found another Britstop that said it could take 3 vans, but the very narrow car park was rammed with cars, so we carried on. Driving along the road, we saw the sign for Jervaulx Abbey and as we passed the car park and tea shop, saw a sign for a CL.  I turned around just up the road and returned to the car park.  I popped into the tea shop to ask about the CL, but it was very busy, so we decided to take our pre-prepared lunch over to the Abbey.  Jervaulx Abbey was home to Cistercian Monks who grew rich from sheep shearing and horse breeding (or was it sheep breeding and horse shearing!?).  They also made a cheese which, over time, became the now famous Wensleydale cheese.  Now in ruins, there's enough remaining to see this was a very large and prestigious Abbey in its day.  I'll google it when home to learn more.  We enjoyed our lunch in hot sunshine before slowly walking around the Abbey - very atmospheric and probably quite scary at night!

Back at the car park, Cathy popped in to see if we could book into the CL - success!  So we're pitched here on electric hook-up, charging all things electronic.  We enjoyed the sunshine sat outside with a brew, until the clouds built and the rain started.  No longer raining, it's threatening more, so the planned BBQ lamb with Greek salad may now be some form of pasta cooked inside - I even 'purloined' some wild majoram from the Abbey for the lamb - it'll keep in the fridge!   We're currently sat inside the van with a G&T, listening to the crows in the trees and hoping tomorrow will bring good weather.  At least we're booked into a campsite at Kettlewell (home of the yellow sheep I saw at last year's Tour) for the next two nights.  So hopefully a good walk, a decent pub dinner and a repeat bike ride of the Tour route for me.  Such are the risks of a holiday in England, where wild-camping is illegal and the idea of an Aire is quickly shot down by the local council (campsite owners perhaps?).

Eventually the showers stopped and we managed a short walk through the enormous hazel trees to watch the sun set.  It also meant I could cook the lamb chops on the griddle outside and they went down well with the salad and a bottle of Lidl's finest Chilean white wine!  Washed up and all secured, we're now sat inside, heating on, listening to a large murder of crows roost for the night in the surrounding trees.  All turned out well in the end. 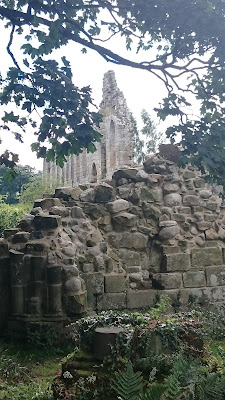 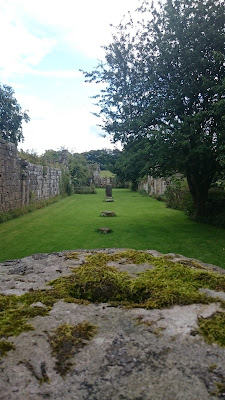 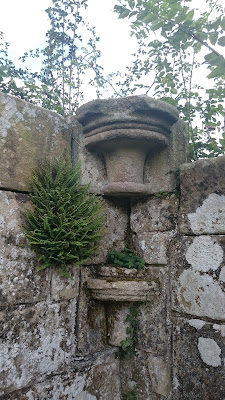 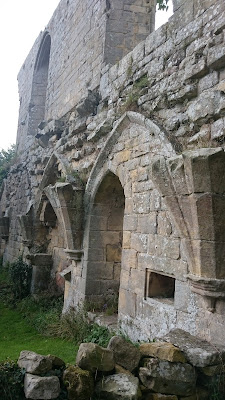 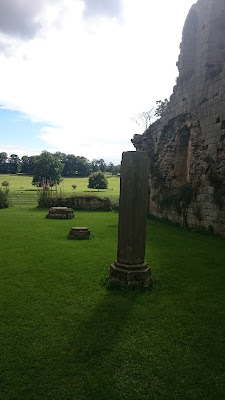 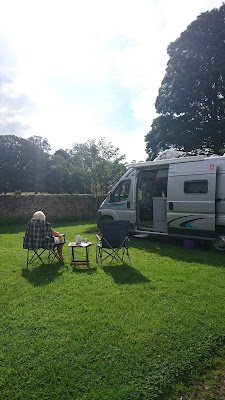 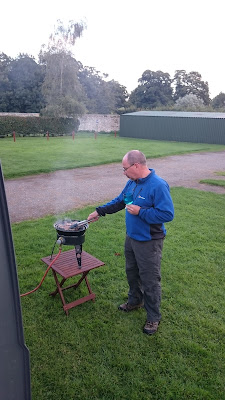