This is our last full day in Barcelona.  We both had baggy heads after last night so had a bit of a lie in, heading out for brunch around midday.  We walked along the beach and back along the marina road looking for somewhere to have lunch - we ended up at one of the restaurants right on the beach - Xup Xup - still, the long walk cleared our heads.

Cathy had ham croquettes to start and I had a warm goat's cheese salad - very French.  We then shared a seafood, meat & vegetable paella - not that great to be honest. Both full, Cathy went for her daily paddle and we slowly headed back along the beach.  By now it was about 3pm, the breeze was chilly and so we went back to the apartment for a brew and a chill.

About 5.30pm we walked out just as the sun set over the hills. It was chilly but not windy. We headed for the Barri Gotic area and had a look in a few shops, doing some Christmas shopping; I bought myself a scarf and Cathy some gloves.  We then found one of the old 'chocolate' cafés - called La Granja - and running since 1872. But first we had to buy some churros.  A couple of doors down was a small shop which made nothing but various types of churros. One man was in there buying them buy the kilo. The two old chaps running the place were very jolly as we bought 6 churros for a grand total of €1.20. Returning to the cafe we grabbed a table and ordered hot chocolate.  This came in a small glass, filled with very dark, thick chocolate - it was very rich and not too sweet. This went very well with the churros, which we dunked into the thick liquid - lovely!

Nicely warmed we headed off to wander through the narrow streets, finally ending up in the Cathedral square.  We'd passed here the other day as the Christmas market was being set up, various stall holders building there pitch into various sized wooden stalls, like lots of sheds. It was clear that the building work was still ongoing as only a few of the stalls were open.  All were selling various Christmas decorations, mostly very tacky.  Some were more religious than others, with small nativity figures. Shopping and wandering done, it was tapas time!

Back in Barceloneta we walked into La Bombeta, a family run bar/restaurant.  It was still quite early so only a few people were sat down. I ordered a beer and Cathy had a glass of cava.  We ordered our food:
Potatos Bravos - which came covered in two sauces - a very garlicky one and a very spicy one
Ham croquetas
Battered and fried aubergine slices
Pork brochettes
Chorizo in white wine
Paprika sausage

Even before the last two items came we realised we'd ordered too much food as the portions were huge! We ate what we could but left quite a lot. A local family sat next to us were tucking in to whitebait, baby cuttlefish, bacalao, snails and salad. We paid our bill and headed out into the cool night, looking forward to resting our full bellies back at the apartment. We stopped on the way to buy some fizzy water to aid our digestion! Back at the apartment, packing done, we headed to bed for an early night, ready for our taxi in the morning. 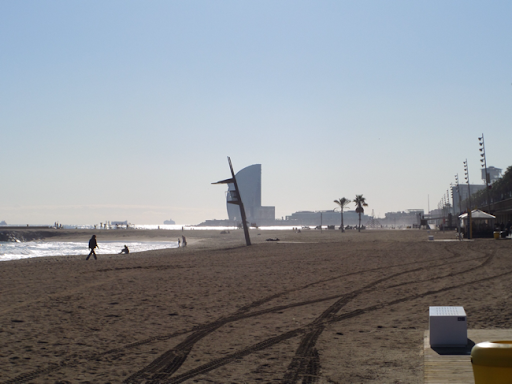