When we talked about where we wanted to spend our 30th wedding anniversary, we had ideas of going far flung - perhaps New Zealand, or maybe a week on safari in Tanzania, followed by a week on the beach in Zanzibar.  But in the end, and saving to buy our own campervan, we decided to return to Barcelona, where we had celebrated our 20th wedding anniversary.  I had a number of loyalty points on a credit card which covered our return flights and baggage.  We prefer to live like locals when travelling, so booked a small apartment in an old but refurbished block in the fisherman's quarter of Barceloneta, about 50m from the beach.

Saturday morning at 0430 was clear and frosty as we made our way to Liverpool airport for our flight to Barcelona.  I was a bit uncertain as we hadn't flown Easy Jet before, but the experience was painless and stress free.  I suspect all the horror stories we see on TV are caused by those who lead disorganised lives and  just can't turn up on time.  The flight time was less than two hours and with a tail wind we touched down 10 minutes ahead of schedule.  Quickly through passport control and baggage collection (why can't British airports be this efficient?), we jumped on the Aerobus to Placa de Catalunya and from there took a short taxi ride to the apartment.  Paperwork and financials sorted, we headed off for a stroll along the beach promenade and to soak up what we hoped would be the first of a week of early winter sunshine.

First stop was a beach-side bar for some tea for Cathy and a beer for me.  We then wandered along the promenade before heading in to explore some of the narrow streets between these old, tall apartment buildings.  We eventually came across a small bar called Chito's. It was busy with locals so we headed in and grabbed a corner table.  Beers ordered, we sat and soaked up the atmosphere while thinking about which tapas to try.  Cathy was keen to try out her Spanish and did very well, although we both knew that the majority of people here speak Catalan, which is closer to French in some ways.  We ordered Calamari, fish croquettes, and some local cheese with ham.  All was basic but very tasty.  After this we popped into a few shops to get some basic provisions for the week and headed back the the apartment for a snooze.

We headed out at about 8.30pm, walking along the marina to Las Ramblas.  This was really busy so we cut through to walk around some of the narrow streets of the Barri Gotic area.  Although 9pm many of the shops were still open.  We were both feeling a bit weary by then, so made our way back to Placa Reial, one of the larger squares off Las Ramblas, with bars and restaurants all around the edge.  We sat down and enjoyed some wine with a little more Tapas - this time meatballs, garlic prawns, patatas brava and bread with tomato. After a chilly walk back we crashed out after a long first day. 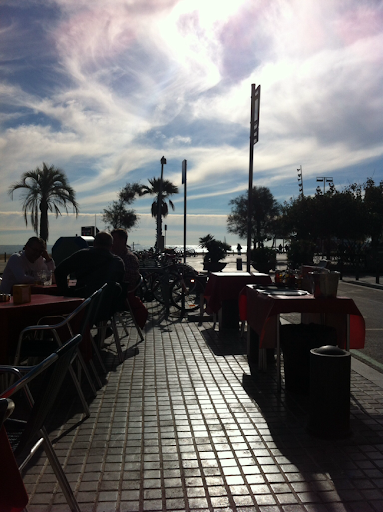